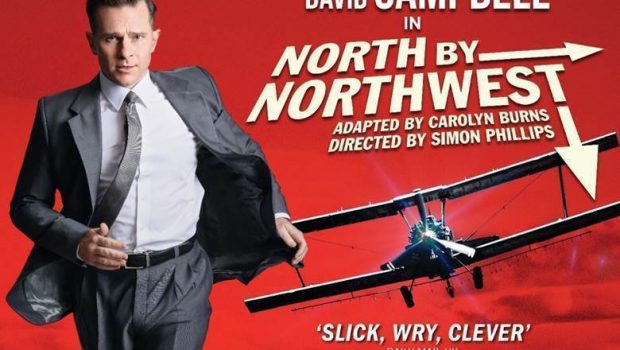 NORTH BY NORTHWEST HAS ARRIVED IN SYDNEY

The thrilling stage adaption of Alfred Hitchcock’s North by Northwest is now playing at the Sydney Lyric for an exclusive and limited season until April 3.

Led by Director Simon Phillips, David Campbell and the incredible Australian cast have immersed themselves in this gripping production adapted for the stage by Carolyn Burns that combines the magic of film and theatre live on stage, featuring every twist, turn and hairbreadth escape from Hitchcock’s original genius work.

“Wow what a ride on stage this show is! When we were in rehearsals I knew this was going to be wild but now as we perform live for audiences the cracking pace and the adrenalin is truly electrifying as a performer. We can feel the audience gripped with suspense and immersed in the Hitchcock world which is thrilling but also comedic so thank goodness they are also laughing in the all the right places! I’ve said it before and I’ll say it again this show truly has to be seen to be believed!”, said David Campbell.

Roger O. Thornhill’s uneventful life is turned upside down when he is thrust into a world of espionage, romance and murder. Abducted by thugs who insist he is a government agent named George Kaplan, the harried New York exec is hunted by ruthless spies in a break-neck journey involving the Feds, crop-dusting planes and a blonde femme fatale. From the skyscraper canyons of New York City to the Black Hills of South Dakota, drunken car rides down twisting roads, a love affair on a train and a famous cliffhanger ending on Mount Rushmore that needs to be seen to be believed. North by Northwest is ingeniously recreated for the stage with clever set design, dynamic projections and an instantly recognisable score.