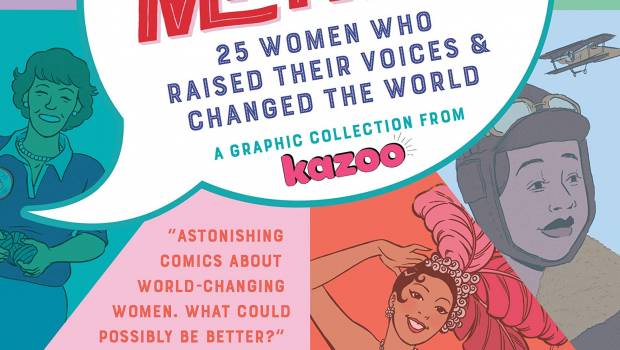 Noisemakers: 25 Women Who Raised Their Voices & Changed the World

Summary: From the publishers of Kazoo magazine for young girls comes this compendium of women achievers from all over the world.

From the publishers of Kazoo magazine for young girls comes this compendium of women achievers from all over the world written and illustrated by a bunch of up and coming women comic artists also.

While I had heard of some of these women, a lot of them are new to me and I enjoyed finding out about them and looking at the artwork at the same time. The title might be a bit overblown, but it is still interesting to hear about these people none the less.

I did read a criticism that the stories are too short and do not go into the lives of the people covered in detail. They are not meant to as you can always research the people you are interested in and use this book as a discovery point.

I did like the “things you have in common with this person” section in the introduction to each story along with the short blurb and a photo or drawing of the actual person.

There a couple of omissions on the scientist front such as Marie Currie who is one of the main ones included in other books I have seen on similar topics. It does seem very US-oriented overall but I cannot fault it for including persons of colour and people from more obscure fields.

I would have loved to have seen Lucy Alford included, who worked at the Spotswood Pumping station and who Melbourne band the Orbweavers wrote about.

Strangely there are not many musicians included at all in this book? There are quite a lot of them that could have been a great contribution to it. Maybe for another volume.

I know someone who would be perfect for it, just don’t call her a female musician that qualifier is unnecessary.

Yeah, maybe they do need another book of just musicians, could have been at least one entire volume of just them. Also more non-USA people and people not in the Northern Hemisphere. Still a good book though and well worth reading for older people who want to find out more as well as the younger audience it was meant for.