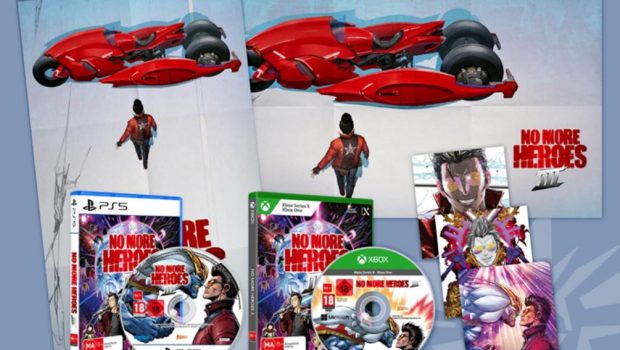 No More Heroes 3 coming to PlayStation®4, PlayStation®5, Xbox One, and Xbox Series X|S this October 14th

Being the “number-one assassin in the world” isn’t what it used to be. Otaku hero Travis Touchdown is back once more, forced out of retirement to defend Santa Destroy, and the whole world, in an intergalactic test of might while proving he’s more than just a washed-up has-been who talks to his cat. Warm up those beam katanas, tighten up the all-new Death Glove, and get ready to partake in outrageous boss battles against the evil Prince FU and his 10 alien henchmen as Travis fights his way to the top of the Galactic Superhero Rankings!

The PlayStation®5 and Xbox versions of No More Heroes 3 will also be available physically, including a copy of the game featuring an all-new illustration by series artist Yusuke Kozaki for the case, 3 art cards and a double-sided poster featuring Travis and his trusty Demzamtiger.

About No More Heroes 3

The legendary assassin Travis Touchdown returns once again to the Garden of Madness! The evil Prince FU, a self-proclaimed superhero from the farthest reaches of the galaxy, has landed on Earth with his sights set on world conquest. In order to save humanity, our no-more-hero must fight to rise to the top of the Galactic Superhero Rankings, taking on each of FU’s nine alien henchmen before he can earn a title match against the prince himself.

In classic No More Heroes style, the Galactic Superhero Rankings are packed with outrageous boss battles, each oozing with personality. Soar through the ranks and prove you’re the baddest in the universe.

Travis may be one bad day away from a mid-life crisis, but he’s still an innovator when it comes to kicking ass. From beam katana boss to wrestling pro, Travis can do it all. Take violence to new extremes with the customizable Death Glove, and punish those deadly invaders with combat that suits your style.

Battling aliens ain’t cheap. Explore Santa Destroy on Travis’ Demzamtiger to pick up odd jobs, from Coast Guard missions to toilet cleaning, then hit the road to unique locales outside of Santa Destroy like Neo Brazil and Thunderdome to keep the cash rolling in.

Bolder, Badder, and Better Than Ever

Thanks to sharper visuals, No More Heroes 3 has never looked better. Add in improved load times and better responsiveness, and you’ll be dishing out eye-popping ultra-violence in no time.

Developed by Grasshopper Manufacture, No More Heroes 3 will release on October 14th for the PS4™ system, and PS5™, and will be supported with Smart Delivery on the Xbox One and Xbox Series X|S across Europe and Australia. The title has been rated ACB MA 15+.