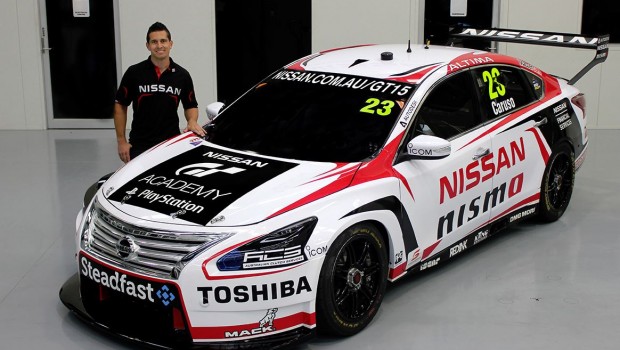 SYDNEY, Australia (23 March 2015) – Nissan and Sony Computer Entertainment Australia (SCE Aust.) are pleased to confirm that the Nissan PlayStation® GT Academy will return to Australia in 2015 – and to celebrate, Michael Caruso will race the #23 GT Academy Nissan Altima V8 Supercar at Symmons Plains Raceway in Launceston, Tasmania this weekend.

As well as Nissan PlayStation GT Academy branding, Caruso’s Altima will carry nissan.com.au/GT15 across its windscreen. Those interested in receiving more information regarding GT Academy, including 2015 qualification details, are encouraged to register at this website to be kept up-to-date with the latest GT Academy news.

The unique, world-renowned competition sees gamers qualify for their country’s National Final by posting times in Nissan cars to the Gran Turismo®6 leader board, only possible on PlayStation®3 (PS3™). Finalists are then selected from the National Final to compete against the world’s best gamers at Race Camp, where the GT Academy winner is crowned, completing the journey from ‘gamer to pro racer’.

After a hard-fought week of competition, Australia’s best finalist, Joshua Muggleton, narrowly lost out to Mexico’s Ricardo Sanchez. Sanchez has since gone on to complete Nissan’s gruelling Driver Development Program and race a Nissan GT-R NISMO GT3 to fifth place overall and second in class in the 2015 Dubai 24 Hours.

Earlier this month, Sanchez was announced as an official NISMO Athlete and will to race a GT-R NISMO GT3 in the 2015 Blancpain Endurance Series for Nissan GT Academy Team RJN.

Racing programs for the Nissan PlayStation GT Academy winners will include iconic races such as the Le Mans 24 Hours, Nurburgring 24 Hours, Spa 24 Hours and Suzuka 1000.

It was at another prestigious race, the 2015 Bathurst 12 Hour in February, where previous GT Academy winners Wolfgang Reip and Florian Strauss, along with Japanese driver Katsumasa Chiyo, took outright victory aboard a Nissan GT-R NISMO GT3, giving the Nissan GT-R its first major win at Mount Panorama since its back-to-back Bathurst 1000 wins in 1991-1992.

A key element of GT Academy is the television series that follows the journey of the finalists as they strive to make their virtual-to-reality dream come true. The 2014 Nissan PlayStation GT Academy series has been screening this month on ONE HD and will soon be available to view online at YouTube.com/NissanAustralia.