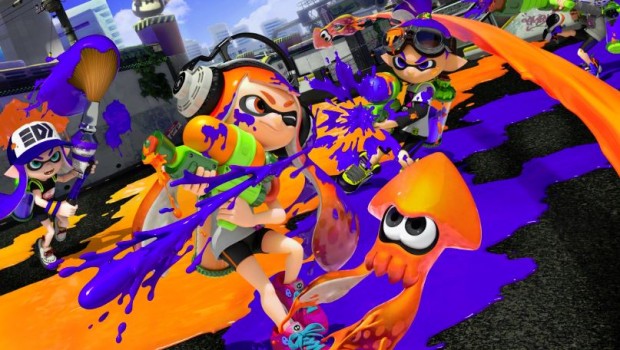 13th February, 2017 – Anyone looking to pick up the brand new Nintendo Switch console will have a colourful treat to look forward to, thanks to a special Splatoon 2 preview coming up in March. Players will be able to download a demo version of Splatoon 2 ahead of its winter release that will allow them to battle against opponents around the world during six sessions spanning the three days of the Splatoon 2 Global Testfire event*.

At the Tokaigi Game Party Japan 2017 event that took place in Tokyo over the weekend, Splatoon series producer Hisashi Nogami also confirmed new details on this winter’s splat-tastic sequel for Nintendo Switch. Private Battle Spectator View is a new functionality that will allow up to two people to participate in a Private Battle as camera operator to observe the 8-player battle from multiple angles. Players equipped with their own recording tools will be able to broadcast videos online from a commentator’s perspective.

That functionality can also be used in conjunction with the newly announced LAN Play feature. Connecting up to 10 docked consoles** via wired LAN will be well-suited for proper tournaments, while for more casual get-togethers up to 8 players can still enjoy a quick game via the previously revealed local wireless connection.

“Two years have passed since the original Splatoon and since then, the weapons, maps and characters in that world have evolved. Through the Splatoon 2 Global Testfire event this March, players will be able to get a taste of that. There will be more new features to Splatoon 2, so please look forward to more reveals in the future,” noted Nogami.

The Global Testfire event will give Nintendo Switch owners six chances to play with other players worldwide during the three-day event. It will offer content also featured at various Nintendo Switch hands-on events around the world. Players can test four different main weapons, including the new Splat Dualies, as well as remixed versions of the iconic Splat Roller and Splat Charger.

The timings of the event are as follows:

Splatoon 2 will be compatible with Splatoon series amiibo and – for the first time in the series – with an upcoming Nintendo Switch app for smart devices that enhances online play. This app will connect to the game and allow players to set play appointments with friends who have been added to their Nintendo Switch friend list or via their social media accounts. It also allows players to match up with those friends directly in the game or voice chat with them via their smart device. For example, during a Private Battle, players can voice chat with all of their connected friends when they divide into teams, but once teams are set, voice chat is switched to communication only between teammates on the same team.

The Splatoon 2 Global Testfire event will allow players to try Splatoon 2 before launch and will run from March 24th – 26th. The full Splatoon 2 game is set to hit Nintendo Switch this winter.