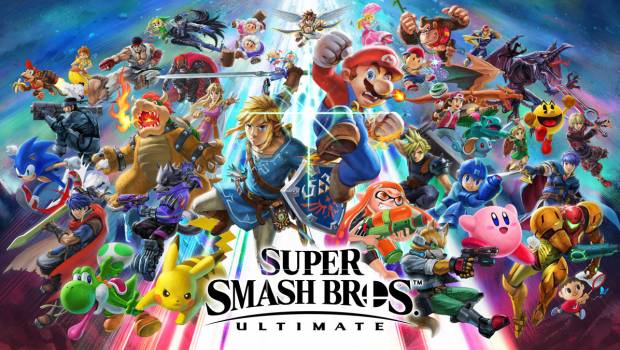 13th June, 2018 – Nintendo opened its activities for the annual E3 2018 video game trade show with a bang – and a smash. Showing world-first footage of Super Smash Bros. Ultimate, Nintendo shared details about the latest entry in a series with sales of more than 40 million worldwide. A new game built for Nintendo Switch, Super Smash Bros. Ultimate lets up to eight players square off in action-packed battles that are all about smashing beloved video game characters off the screen. Legendary game worlds and fighters collide in the ultimate showdown at E3 2018, which runs through 14th June at the Los Angeles Convention Center. Nintendo made its announcements during its Nintendo Direct: E3 2018 video presentation, which can be viewed at https://e3.nintendo.com/*.

Super Smash Bros. Ultimate will include every single fighter ever featured in the series’ nearly two-decades run, making it one of the biggest crossover events in gaming history. Fans can enjoy returning favourites like Ice Climbers and Pokémon Trainer, as well as newly announced fighters like Ridley from the Metroid series and Inkling from the Splatoon series. The game supports a variety of controller options, including Nintendo GameCube controllers (original or newly designed), Joy-Con, or the Nintendo Switch Pro Controller. With Nintendo Switch, players can throw down whenever and wherever they like in handheld or tabletop mode while enjoying online play.

Nintendo also announced that Fortnite, the Battle Royale phenomenon from Epic Games, will be available for Nintendo Switch from 7:00am AEST today. Players can download it for free from Nintendo eShop, then test their mettle in thrilling crucibles of combat. The action never stops with Fortnite on Nintendo Switch, where players can build and battle together anytime, anywhere. Team up online with friends in the same room or around the world. Weekly updates and new gameplay modes will keep the action fresh for seasoned Fortnite players and newcomers alike.

Other upcoming items announced during the Nintendo Direct include:

·        Super Mario Party: Inspired by classic Mario Party board game play, the beloved series is coming to Nintendo Switch with new mini-games and play styles that make use of the Joy-Con controllers. Super Mario Party includes features like character-exclusive Dice Blocks that add depth to players’ strategy. Up to four players take turns rolling the dice, and individually race across the board searching for Stars. In Toad’s Rec Room Mode, new gameplay links two Nintendo Switch consoles for side-by-side fun. The game launches on 5th October.

·        DAEMON X MACHINA: A new fast-paced mech action game from Kenichiro Tsukuda is coming to Nintendo Switch in 2019. Players take their fully customisable Arsenal powered suit on a variety of missions to thwart the enemy at all costs. They can choose and equip their Arsenal with a multitude of weapons, obtain more from downed enemies, and swap them on the fly to suit their strategy in the face of ever-changing threats.

·        Overcooked! 2: The kitchen mayhem returns in this sequel from Team17 and Ghost Town Games that’s brimming with even more recipes, characters, kitchens and co-op madness. Bake, barbecue or broil with up to three other players in wireless local and online play modes. Save the world from clumsy cooking when the frantic food-juggler arrives on 7th August.

·        Killer Queen Black: Redesigned from the ground up, the acclaimed arcade extravaganza that became a multiplayer phenomenon is coming to Nintendo Switch. Players can hop on a snail, hoard berries or wipe out the enemy’s queen to claim victory for their team in Liquid Bit and Bumblebear Games’ Killer Queen Black, when it launches first on Nintendo Switch later this year.

·        Octopath Traveler: Players can take another early look at Square Enix’s upcoming fantasy epic when theOctopath Traveler Prologue Demo arrives on 14th June in Nintendo eShop for Nintendo Switch. Play the demo, then use the save data transfer feature to carry your choices into the main game, once purchased, where players can live the stories of each of the eight travellers and freely explore the world of Orsterra.Octopath Traveler is scheduled to launch on 13th July.

·        More great games are coming in 2018, including EA Sports FIFA 19 from Electronic Arts, Monster Hunter Generations Ultimate from Capcom, Dragon Ball FighterZ and Dark Souls: Remastered from BANDAI NAMCO Entertainment, Wolfenstein II: The New Colossus from Bethesda Softworks, andStarlink: Battle for Atlas from Ubisoft, which includes characters and content from Nintendo’s Star Foxfranchise that are exclusive to the Nintendo Switch version of the game.

To celebrate E3 2018, Nintendo eShop will offer savings on select digital games that helped make some of the fighters in Super Smash Bros. Ultimate famous, as well as other digital games on Nintendo Switch and Nintendo 3DS family systems. The sale kicks off on Thursday 14th June at 11:00pm AEST and runs until 23.59 AEST on Thursday 21st June. The full line-up will be announced at 11:00pm AEST on Thursday 14th June. All titles can be purchased directly from Nintendo eShop.

As always, people can keep an eye on https://e3.nintendo.com/* throughout the show for all of Nintendo’s latest E3 updates, including today’s Super Smash Bros. Invitational 2018 finals and the final round of the Splatoon 2 World Championship, and lots of gaming details on Nintendo Treehouse Live | E3 2018.¯