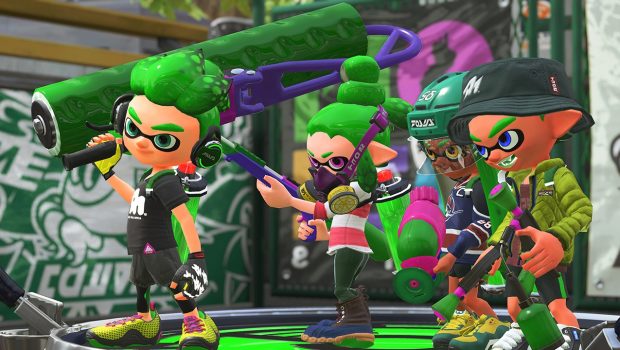 Fans can watch online as pros and amateurs compete

2nd June, 2017 – Nintendo is bringing social, competitive tournaments to this year’s E3 video game trade show. Over the course of two days, fans around the world can watch online as both pros and amateurs compete for glory in Splatoon 2 and ARMS, which can only be experienced on the Nintendo Switch console. Fans can stay up late to watch all the action in English at Nintendo’s E3 2017 website*, as well as on Nintendo’s Twitch channels with a chatroom available.

For the first time ever, competitors from four different global regions will compete for world dominance in Splatoon 2. The four four-person teams – “Deadbeat” from the United States, “Dynameu” from Japan, “Rising Moon” from Europe, and “Blue Ringed Octolings” from Australia/New Zealand – defeated their rivals in local tournaments which occurred in recent months.

Australian and New Zealand fans who watch the action livestreamed from the U.S. West Coast will see the winning team of the live-streamed tournament win global bragging rights and a special Splatoon 2 trophy engraved with their names. Announcers for the Splatoon 2 tournament will be avid Splatoon player, Nintendo fan, athlete and broadcaster Jordan Kent, Ashley Esqueda of CNET and Eric Smith from the Nintendo Treehouse. Prior to E3, Nintendo of America will release video content highlighting the tactics, strategies and storylines behind competitive Splatoon play.

This live-streamed ARMS competition will pit four expert competitive gamers from the fighting game community against E3 attendees who qualify at Nintendo’s booth during certain hours. The top four competitors will be selected to face off against four pro competitive gamers.

The eight tournament participants will do battle until a champion emerges to win the coveted 2017 ARMS Open Invitational championship belt. Announcers for the tourney include Super Smash Bros. broadcasters D1 and VikkiKitty. The participating pro players are Alex Valle of Street Fighter fame; Kelsy Medeiros, a.k.a. SuperGirlKels, a professional Super Smash Bros. for Wii U player hailing from Canada; and acclaimed Super Smash Bros. players Daniel “Tafokints” Lee and Marie-Laure “Kayane” Norindr from France, one of the most decorated professional female fighting game players in history.

For more information about Nintendo’s activities and announcements at E3 2017, be sure to check Nintendo’s E3 2017 website in the coming weeks.