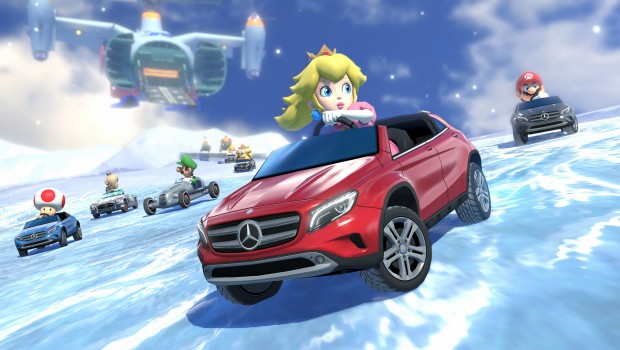 7th August 2014 – For the first time ever, Nintendo’s Mario Kart series will be powered by some real-world horsepower. A software update on 27th August to Mario Kart 8 for Wii U will deliver a variety of new features for players, most notably the ability to download three free Mercedes-Benz cars that players can race in the game: the modern Mercedes-Benz GLA, the 300 SL Roadster from the 1950s and the legendary Silver Arrow of the 1930s.

You can watch the trailer here: http://youtu.be/X0-2wZZmZzM

The GLA model comes with special wheel options, while players can customise all three new karts with various wheels and gliders in the game. The new content arrives on the 22nd anniversary of the Japanese launch of the original Mario Kart game, Super Mario Kart, which launched on 27th August, 1992, for Super Nintendo.

Between 27th August and 23rd September, Nintendo and Mercedes-Benz will also host an online worldwide “Mercedes Cup” tournament. All competitors need is a Wii U console, Mario Kart 8, a broadband Internet connection and the Mercedes-Benz karts. Access to the “Mercedes Cup” in the game can be found in the online tournament section.

The Mario Kart 8 software update will also add a variety of new features designed to enhance the racing experience for everyone. These include: