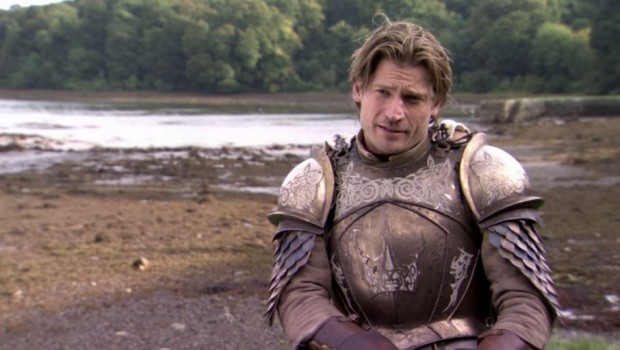 Where did we leave Jamie at the end of season three?

At the end of three, he makes it back to King’s Landing, and you end on him opening the door to Cersei’s room. She turns round to look at him, and, the way I see it, she has a look of disgust with what has shown up. He’s filthy and there’s the thing with his arm, and he’s clearly not the man that left King’s Landing.

Where does season four take Jamie?

When season four starts, he’s been home for a few weeks. Very little time has passed, but he’s cleaned up, he’s had his hair cut, and he now has to re-enter that world. He has become the Lord Commander of the Kings Guard, which is a huge responsibility, and, in his world, a huge honour. Of course, his father has other plans, as always. They had one scene before, in season one, where his father says, ‘I want you to become the man you were always meant to be.’ That is very much what Tywin wants now: he wants Jamie to leave the Kings Guard, and return to Casterly Rock, and take his place as his heir. And then something happens that I don’t think has happened in any of the other scenes with Tywin and his kids. I remember in season three there were some great scenes with Tywin, Tyrion, and Cersei, where they would try to rebel, but every time they did they were told off, and they did what was told. When Dad said, ‘This is what you do,’ they did it. But here, Jamie actually says ‘no’ to his father: ‘No I’m not going to do what you want me to do. I don’t want to have a family, I don’t want kids, I don’t want any of that.’ Basically he’s taking control of his life, or trying to, anyway. It’s tricky, to say the least. With Cersei, he loves her and the first scene they have, she’s had an artificial hand made for him, a golden hand, which he accepts, but clearly it’s her idea. He’s trying to get close to her again. He says, ‘I’ve been back for weeks.’ Clearly they haven’t been intimate, and something’s wrong there.

With Jaime back at King’s Landing, there must be a lot of Lannister family scenes? Do you enjoy that particular twisted dynamic within the Lannister clan?

Oh yes, very much (laughs). There’s a great scene with his brother early on. Tyrion is really the only one he can confide in. He can show his weaknesses to him. He doesn’t know quite how to deal with his new situation, and Tyrion is the only one to whom he says, ‘Listen, I’m not the guy I was.’ Because he’s a Lannister, and he has a lot of enemies, he says, ‘When people find out…’ Being the Lord Commander, you have to be powerful, and of course he’s scared shitless that when people find out that he’s not, he’s going to lose authority. So he does confide in Tyrion, and Tyrion then decides to help him – or he tries to help him, anyway – by setting him up with Bronn, who then becomes his tutor. That’s a great character to meet for Jamie, because we know Bronn as this guy who just doesn’t give a shit. Great one-liners. And Jamie’s not used to people that are that quick and sharp and clearly have no respect. He should start getting used to it, because he’s just dealt with Locke, in season three, who’s of the same mould.

What about Brienne? Are they still close?

On top of all that, there’s Brienne, who’s lurking there. He took responsibility for her at the end of season three. He made a pledge, and also he saved her. He had decided to leave her, and then he realised that he just couldn’t. I don’t think he really knows why, but he clearly has some feelings for her, and there’s a loyalty that’s been established that he wants to honour. But of course he doesn’t know what to do with her now, because in the beginning of season four there’s another scene where he just wishes that she wasn’t there. There are already so many things on his plate, and then he has to deal with her. She keeps telling him, ‘You made a promise!’ He’s like, ‘What do you want me to do, for God’s sake? The Stark girls aren’t here. Sansa is married to my brother. She’s safe.’ And of course, she’s not.

It’s such a big cast. Do you all get along?

It’s great. I’m very lucky, actually with all the actors. It’s a great group of actors and it’s so easy. You work with someone like Charles Dance and he’s just a brilliant actor, so it makes it easier, and of course the same goes for Peter Dinklage. On top of that, we do have a lot of fun outside, which is, I think, necessary. It was the same last season with Gwendoline [Christie]. This season is a very dramatic season, as well, so it’s important to have fun, because every scene is so dark and often heavy.

Did you always know how drastically your character would change so radically? Was that part of the appeal?

It’s such a great character. George R.R. Martin created this character, and Dan and David have developed it even further, I think, in the series. With your character, you always want some secrets, you want some surprises, and you want some obstacles. He’s a little treasure trove, really. You knew that if we got lucky, we would get to tell the whole story, so you want to take him as far in the beginning of the whole show, in season one, towards the arrogance and the ego, the selfish guy and the brutal man, so you have as big a drop as you could. Because I knew what was coming, I was trying to plan it. At the same time, you also want to plant the seed, so it doesn’t come as a complete surprise, what he becomes. It’s funny because when we were doing season four, me and Peter Dinklage and Lena Headey were watching Breaking Bad, when it was coming to an end. We made a pact where we weren’t allowed to watch any episodes until we had at least four, and then, when we were in Dubrovnik, we would sit down and watch all four together with dinner and wine. It was great, but why I’m mentioning that is because you look at that character arc, of Walter White, and it is so extreme. You have this good-natured family man who gets stricken by cancer, and he tries to provide for his family, and then, in the end, he’s Scarface – he’s beyond Scarface! It’s just so enjoyable to watch. I’m not saying that it’s the same with Jaime, but it’s that kind of thing. It’s beautiful writing, and it’s exciting. The funny thing is, I think we all love to watch these characters because we see parts of them in us. We have days where the Scarface comes out. Hopefully we all behave, but at least in our minds, sometimes we have those moments.

Have you ever seen the Red Wedding reaction videos?

Yeah, I love it. My favourite is the older guy who’s sitting in the chair going (adopts American accent), ‘Oh my gaaad! Oh no. My gaaaaad.’ He was not expecting that, he was just enjoying his Sunday evening. That was not the way it was supposed to go down. That’s another thing, which is amazing, you have so many people who’ve read the books, but people are so loyal to the show that they didn’t spill the beans.

Is four similarly paced to season three, building up to a big climatic episode?

No, it’s very different in that way, because I think the first three series did have that big episode nine. I’m not saying that season four doesn’t have a big episode nine, but I think we have quite a few nines in the season. I think, without saying too much, episode two will have a huge peak, episode four. There are at least four or five big moments. There are a lot of peaks in this season. I think it’s going to top season three in terms of intensity.

Who’s your favourite character apart from your own?

Well my favourite character is Jaime, but there are a lot of great characters. I think Cersei is a really interesting character just because of what she’s had to deal with. She is such a villain, in many ways, but at the same time she is a mother, and was a scorned wife. It’s so complex, and clearly she is slowly but surely going mad. I think that’s interesting.

Has the experience of making it changed as the show grows bigger?

Well I think the difference is that you know the crew, and you know people, so there are familiar faces when you get back. In the first season it was all brand new and the scale seemed enormous. It seemed almost impossible on every level of production, in front of and behind the camera. I still don’t know how they do it, but they have a system that works. They know how to produce this show, and the scale, so you feel that you walk into a very well oiled machine, but it never feels old, and it never feels like just another day at the office – it still feels really fresh. And also because you have so many new faces, there is a huge excitement about working on this show. I haven’t met anyone who wasn’t 100% professional and dedicated.

Where did you film this season?

This time I spent half the season in Dubrovnik. I had two days in season three. It’s a great location, a beautiful city. You just pinch yourself. I’m a very lucky man to be part of it.

Were you tempted to ask how it ends?

Of course. I would love to know, but it’s a question you don’t want to hear yourself ask, because you know he’s going to say, ‘I can’t tell you.’ I was asked that earlier, if I’m afraid of dying, and yes, I am as a person, but I’m not afraid of Jaime dying, because it’s such a great thing to be a part of, either way. Like the Red Wedding last year was such a spectacular episode, and of course you’re sad to see Richard [Madden] and all those guys leave, but at the same time, we had a great time, and it’s been a great job, and there’s nothing to mourn here. It’s a television show, and they went out in style.