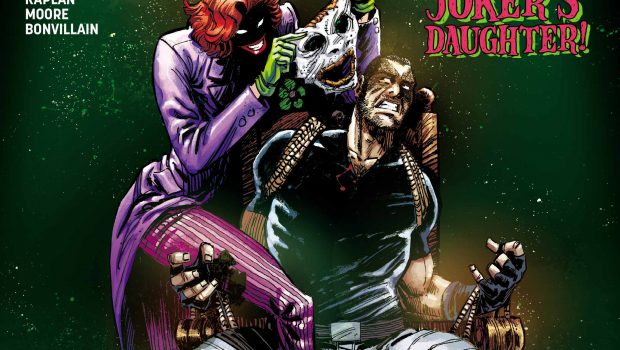 Heroes without a Home

This issue features Travis Moore on Art, Tamra Bonvillain on colours, and Zack Kaplan (Eclipse, Lost City Explorers) taking over the writing duties.  Dick Grayson has started going by Ric, and is looking to step away from the Nightwing mantel.  Will he be able to with the arrival of the Joker’s Daughter? 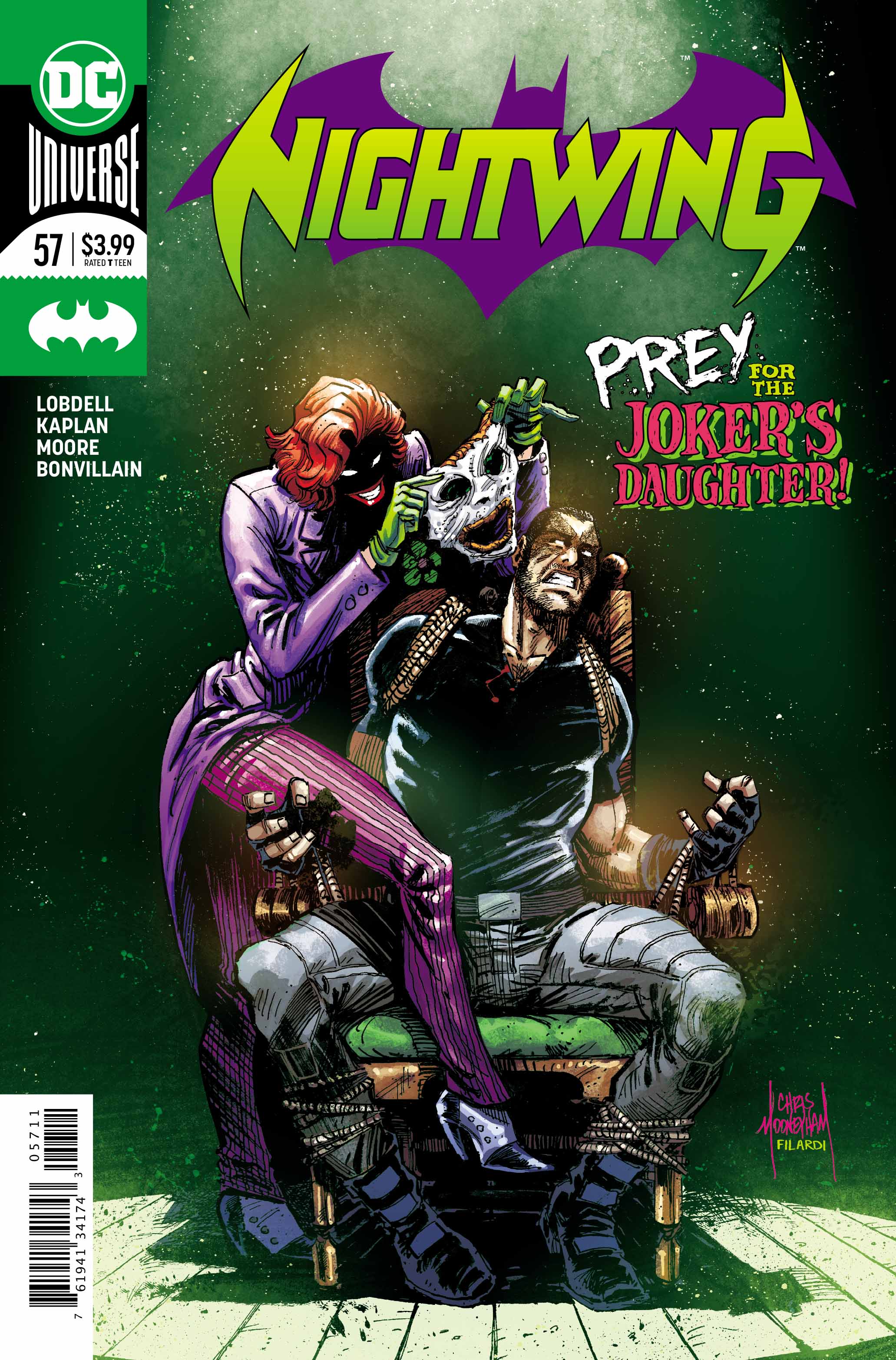 The standard cover by Chris Mooneyham and Nick Filardi, features Dick unmasked and tied to a chair.  He is struggling against his bonds while the Joker’s Daughter is looming over him.  One leg thrown over his arm while she holds a mask that is perhaps the Joker’s or her own face over Dick.  Dick is clearly repulsed, but the best thing about this is that we can’t actually see the face of the Joker’s Daughter.  Her eyes and brilliant red lips are visible, but everything else is cloaked in shadow.

The variant cover by Jeff Dekal is a little more sombre.  It features Nightwing perched on a statue of an eagle.  Nightwing looks vigilant, and the symbolism of him as a defender of freedom alongside the eagle is great.  The background is also beautiful, the moon shines through some clouds, with stars visible in the clearer areas of the sky. 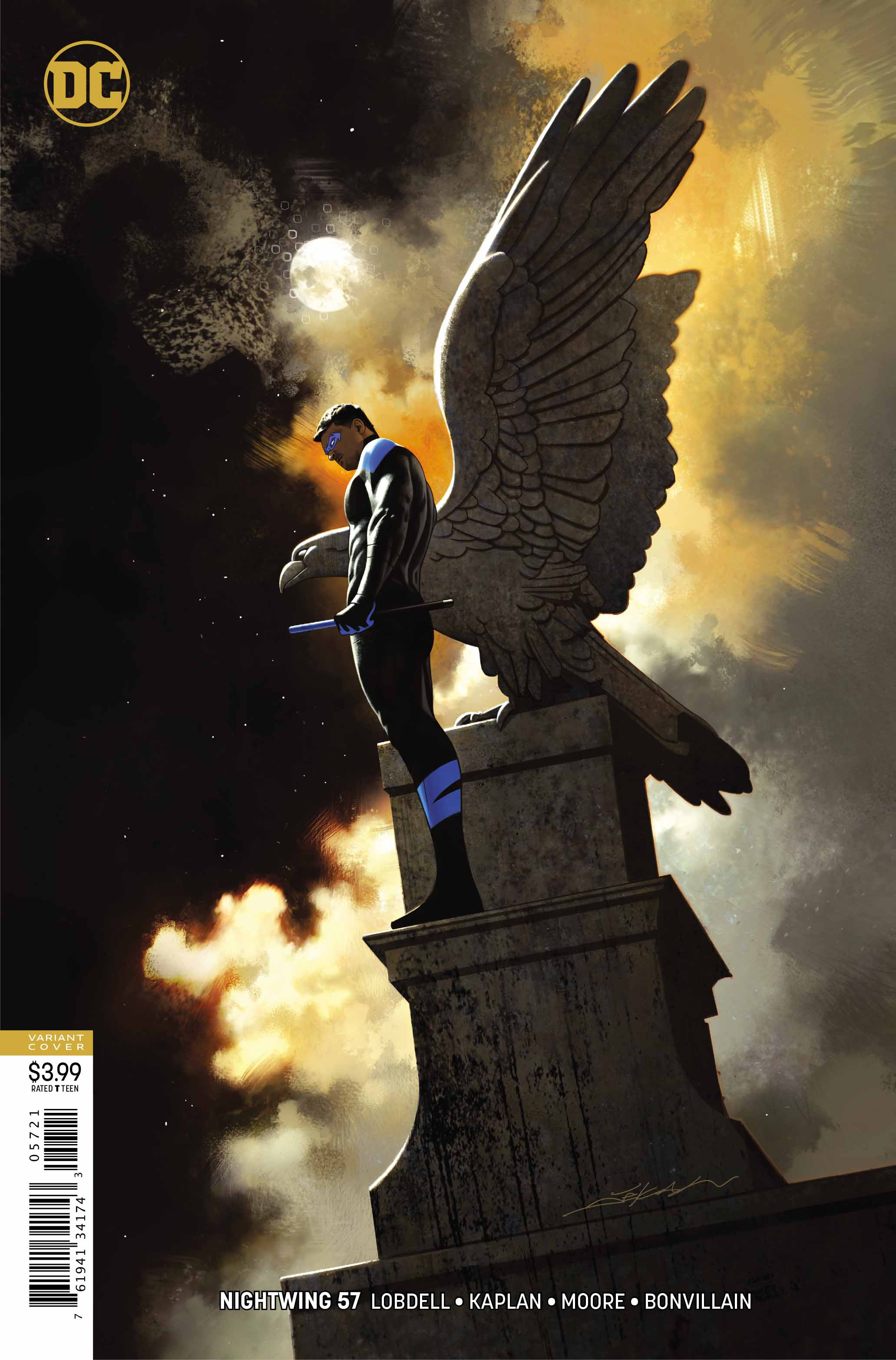 The art in this book is well detailed, especially when it comes to facial expressions.  From Dick’s introspection at the beginning to Councilman Pollard’s smugness and then terror.  The expressions of every character convey real emotion.  There are also some flashback scenes which have a different feel to them artistically.  In these scenes, Dick is going over the events of previous issues.  In particular he is reviewing the events of where he suited up to aid all the other Nightwings that were trying to defeat Scarecrow.  These flashbacks fit in great with the narrative, and the slight tonal change they provide give additional insight into how Dick is thinking. 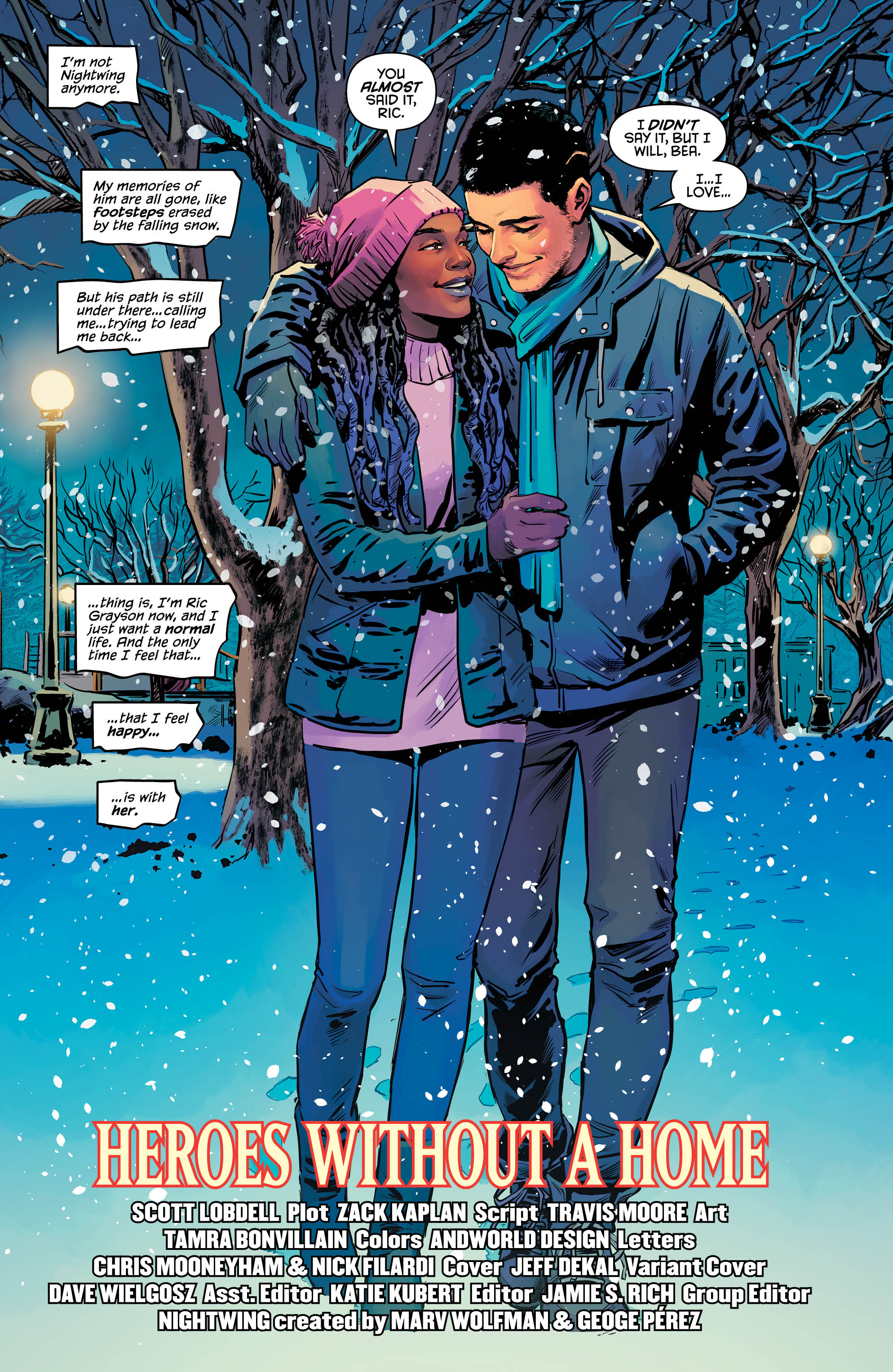 The issue begins with Dick and Bea walking through a wintery park at night.  She is teasing him for being his usual brooding self, and after a failed pick up attempt, he offers to join her in heading to a meeting to help her save a homeless shelter that the town council is looking to close down.

Next, we’re taken to the meeting itself and introduced to Councillor Pollard.  Pollard wants to see the shelter closed to make way for an arena to revitalize the downtown.  Though they try to sway him, he is set on the arena.  This quickly segues into a scene where another Nightwing manages to get a kidnapper to provide her with the location of his victim.

At this point it picks up significantly, as Councillor Pollard has his first encounter with the Joker’s Daughter.  She dispatches his security, and then uses him to effectively announce her arrival on the scene in Bludhaven.

The issue is well written, and I quite enjoy Kaplan’s dialogue.  It’s organic, and conversations feel real and not forced.  As well, the issue is well paced and ends with a great cliff-hanger.  It will be neat to see where this arc goes from here. 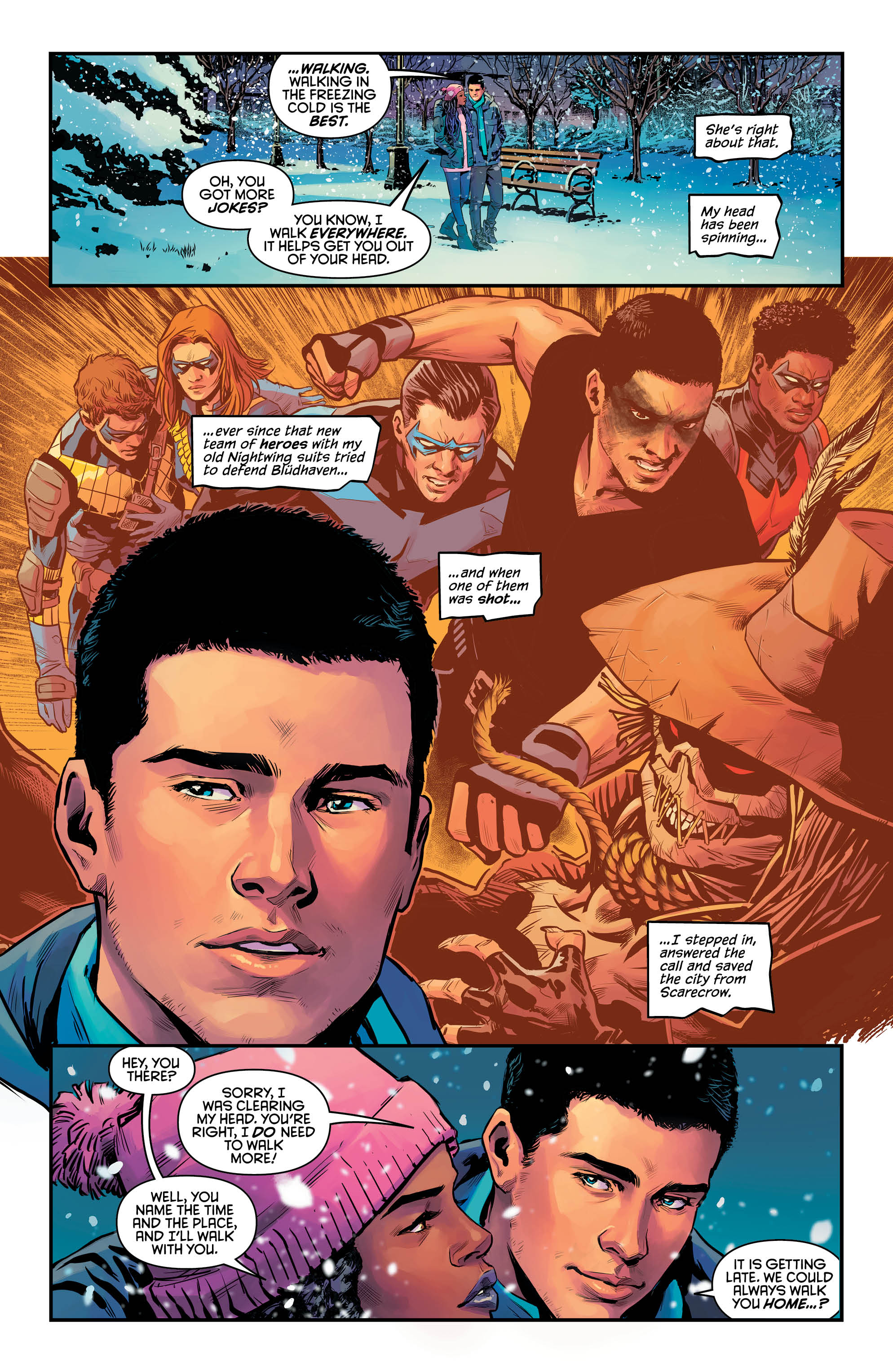 This issue is a great jumping on point for a new or more casual reader.  It is the first issue in a new arc, and allows Kaplan, as the new writer, to hit the ground running with the art team.  The story is well paced, and builds slowly to a great cliff-hanger.  The art itself is also fantastic.  Moore does a great job in bringing the characters to life via their body language and facial expressions, and Bonvillain’s colours bring it all together.

This issue is a great read introducing a potentially terrifying villain.  4 out of 5 stars.