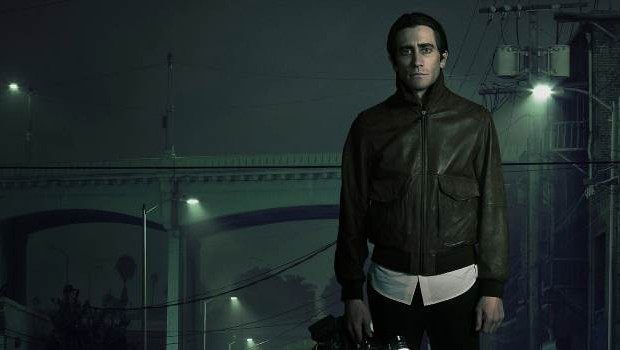 Summary: Nightcrawler is a vicious satire of the American Dream, set against the neon drenched hellscape of Los Angeles.

“Nightcrawler is a vicious satire of the American Dream, set against the neon drenched hellscape of Los Angeles”

When creepy petty thief Louis “Lou” Bloom (Jake Gyllenhaal) comes across a car accident on a stretch of highway and sees a freelance film crew record the devastation, he realises that there is money to be made. Using his ill gotten gains to buy a camcorder and police scanner, Bloom begins a steady ascent up the greasy pole of sourcing footage for morning television news.

Emotionally empty, morally bankrupt and ethically challenged, Gyllenhaal’s Bloom is a new monster for the American cinema. Self educated through online courses, Bloom peddles a twisted line in business speak that talks all about self actualisation, key performance indices and performance analytics. Latching onto the freelance news market like a lion onto a gazelle, Bloom’s twisted drive and ambition rapidly explodes into full blown sociopathy. 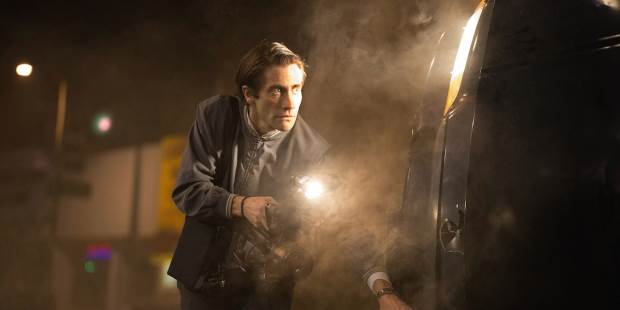 Gyllenhaal is brilliant as Bloom. Having lost weight for the role, his gaunt face, lantern jaw and massive, unblinking eyes are totemic symbols of the spiritual emptiness at the core of his character.
Bloom isn’t above moving bodies to ensure his news items have the best imagery. He’s not above blackmailing the news director he reports to (Rene Russo as Nina Romina) for sex. And he’s not above exploiting a mass murder to further his own ends in the movie’s climactic scenes.

Writer/director Dan Gilroy has tapped into the social and economic devastation wrought by the GFC upon America since 2008 has been deep and widespread. The American dream that anyone with talent and ambition can succeed has to an extent been proven a chimera. Millions of people were forced into unemployment as bad investment choices of major firms corroded the nation’s economic structure, destroying jobs and threatening the social fabric. Gilroy neatly taps into the audience’s unease about job security and the excesses of capitalism, effectively arguing that corporate America’s obsession with profit has reduced life to a transactional pursuit.

Nightcrawler shines a light on a number of issues facing America today. Not only is the shabbiness of capitalist America exposed, but also holds its corporate culture to ridicule. The descent of journalism into blatant shameless exploitation is examined, with its culture feeing an insatiable public appetite for more extreme coverage of news. Bloom not only pitilessly records the deaths of peoples in shootings and car accidents, he deliberately manipulates the scene to make the imagery even more shocking and voyeuristic, feeding into a media cycle glutted on blood and gore and extremes.

Bloom is a manifestation of the worst excesses of America. He is capitalism in its red in tooth and claw imagery, devouring the lives of people in an insatiable search for profit. He is an aspect of its narcisissm, turning inwards to reflect on themselves without showing the empathy to look outwards at their fellow man and connect with them. And he is the triumph of its shallowness, spouting gibberish masked as an eternal truth, believing that now is more important than learning from the past, or reflecting on the possibility of the future. 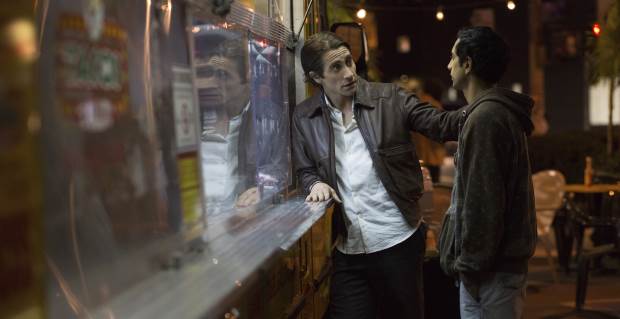 Aside from the socio-economic polemic, Nightcrawler is a beautifully shot movie that spends most of its running time prowling through the darkened streets of Los Angeles. Where there is light, it is often drenched in colour, heightening the effect of the bloody mayhem that Bloom pursues with cool alacrity.

Written and directed by Dan Gilroy (The Bourne Legacy, Real Steel), Nightcrawler is a movie which engages the head and the heart. It takes an unsparing knife to how America views itself, and takes no prisoners in doing so. Bloom is a stunning creation – morally empty with a voracious appetite for success and self improvement. Long after Bloom shambles off camera in the final scene, long after the sirens have faded and long after the chattering televisions have been switched off, Nightcrawlers will leave you awake at night, pondering the whys and wherefores of the society we’re all forced to inhabit.

Overall – a movie that lays bare the bankruptcy at the heart of America’s view of itself, Nightcrawler is a movie that should leave you exhausted and petrified at what exactly happens in the world when the sun goes down. A searing indictment of modern capitalist society, it is nevertheless great pulpy fun, with a central performance by Gyllenhaal that will leave you breathless with shock and awe.
Nightcrawler is America as it is today, sacked like Rome after its fall, led by the few at the top who feast on the dazed survivors stumbling through the ruins. 5/5

Visuals: stunning depiction of the nightsideof Los Angeles. There is almost a documentary feel to the footage and camerawork, mirroring the storyline. 5/5

Audio: a pulsing soundtrack complements the story as it ramps up to its pulse pounding finale 5/5

Extras: a neat package of extras fleshes out the story behind thes cenes. The Trailer and Teaser are an art in themselves, distilling the essence of Nightcrawler without giving the game away. Interviews features Gyllenhaal, Russo and writer/director Dan Gilroy talking about their work on the production. Gyllenhall and Russo give interesting insights into their characters. Gyllenhaal also talks about his work as co-producer, and how that role complemented his acting.

Gilroy talks about the inspiration behind the story and the actual work. His most interesting insight is how he sees the character of Louis Bloom as an animal moving through the landscape, someone to be studied and certainly not tamed. The featurette consists of two packages – If It Bleeds, It Leads, taking a quick look at the real life work of stringers (or Nightcrawlers) who hunt the night for footage to provide to local news organisations. The other featurette, , The Ultimate Success Story, is effectively a promo reel for the movie, intespersing cast and crew interview snippets with cuts from the movie. 4/5 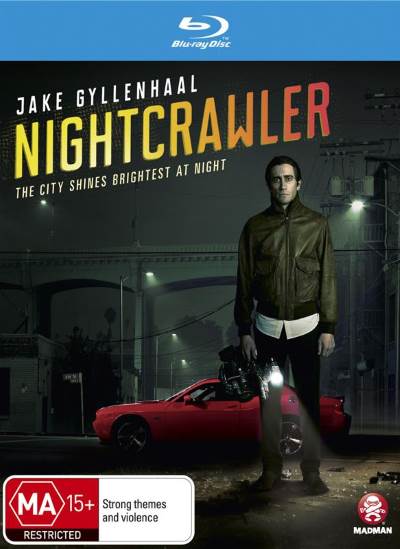