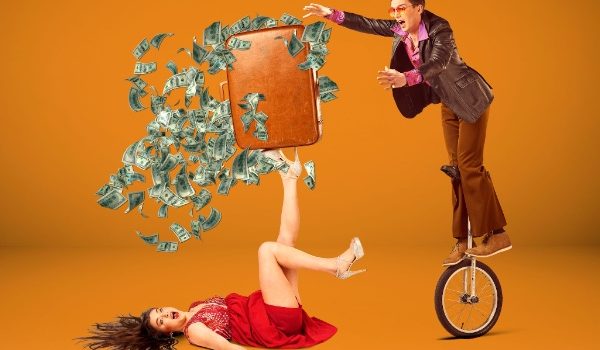 We are looking for someone… someone important maybe, or maybe not? We don’t know who it will be, we may not even know what we are searching for…

In their final production at NICA, this ensemble will serve up a spectacle of eccentricity, exultation, spontaneity and humour. Enjoy a delightful display of physical theatre, falls, dance, slapstick and poetic stage imagery mixed with elite circus skills including acrobatics, adagio, aerials, unicycle, roue Cyr and handstands.

This is a classic tale of ‘whodunnit’ with a twist: someone has gone missing and the characters are on a hunt to solve the case. But in true slapstick style, things don’t go to plan and comedic mayhem charmingly suspends the need for narrative.

Within the characters of Qu’est-ce Que C’est? you may find a friend, an enemy, someone loved, an icon, a star, a queen, a superman, a fool or a Madonna – in short, the everyman who summons our humanity.

Award-winning Charlotte Saliou is a Paris-based circus director known for her delightful brand of contemporary clowning and physical comedy with a strong narrative. She has created numerous shows including ElianeS and Jackie Star, Elegance and Beauty and has worked with international companies such as Cirque le Roux and Compagnie Numero 8. NICA’s Performance Coordinator Zebastian Hunter discovered Charlotte’s work whilst leading a NICA study tour to the Montreal Circus Festival.

Although it is Charlotte’s inaugural pairing with NICA, she continues the organisation’s rich tradition – supported by the Pratt Foundation – of having an internationally renowned director working on the third year ensemble.

“The initial challenge has been coming to know the students and who they are on stage – their basic character as a performer – as I have stepped into a process that has been three years in the making,” says Charlotte.

“It has been wonderful to uncover the strength of the group and how they each know themselves – as we put together a story featuring 19 characters!”

Zebastian says that working with an internationally renowned guest director is critical to the success of graduates, so that they embrace diversity, experimentation, artistic mastery and collaborative skills.

“Increasingly, circus performance is ensemble rather than solo acts, artistically diverse and avant garde. Performances must transcend the ‘trick’ and demonstrate nuanced artistry – be it poetic, political or comic,” says Zebastian.

Qu’est-ce Que C’est? is unique as a NICA show as it is predominantly a work of physical theatre with the circus skills peppered throughout the performance to enhance the narrative action.