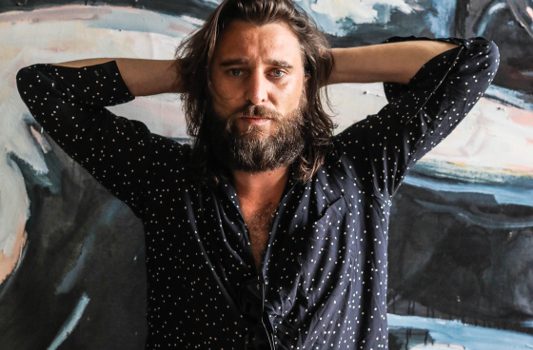 Armed with one of the most powerful voices in rock ‘n’ roll, killer songwriting hooks and an unbeatable stage presence, Nic Cester sold over six million albums with incendiary Melbourne world conquerors Jet.

Now, after nearly a decade of chaos and carnage fronting one of the most successful bands of the ’00s and a few quiet years off living in Berlin, Milan and Como, Nic Cester returns with Sugar Rush – his debut solo album, released Friday 3 November via Bloodlines, the new label from Melbourne’s Mushroom Group.

Produced by Jim Abbiss (Adele, Arctic Monkeys, Queens Of The Stone Age) and recorded in Milan’s legendary Officine Mecchaniche studios and George Martin’s Air Studios in London with members of cinematic rock’n’roll band Calibro 35 (whose work has been sampled on Compton by Dr Dre and ‘Picasso Baby’ by Jay Z), Sugar Rush is a labour of love, a radical departure and a hell of a record.

A mixture of soul, blues, lost Italian soundtracks and sheer musicianship. Sounding like nothing he’s ever done before, Cester’s knack for arrangements and melody remain, marking him as a truly prodigious talent.

“Like most of the songs on the album I was enjoying flirting with different genres and then spinning them into something else. ‘Psichebello’ is the most psychedelic track on the album and the moment that highlights the abilities of the amazing Italian musicians who I had the pleasure to record with.”

Cester will return to Sydney and Melbourne in late Oct/early Nov for two exclusive launch shows, bringing his unmissable, all-Italian live touring band – the Milano Elettrica – along with him. With recent gigs supporting Paul Weller and Kasabian, these dates will be something special. Tickets are $40 (+bf) and on sale now!

Melbourne fans: preorder a CD with a ticket purchase bundle, and collect the album on the night from the merch desk – see here.

Futher details about Mushroom’s new Bloodlines entity will be unveiled next month. Launching with one of Australia’s most successful rock exports, Michael Gudinski, Chairman of the Mushroom Group, had this to say:

“After smashing it worldwide with Jet, it’s truly exciting to have Nic Cester join the Mushroom family with this world-class solo album, our first official release on the Bloodlines label. We look forward to working with Nic on this record across Australia and New Zealand.”