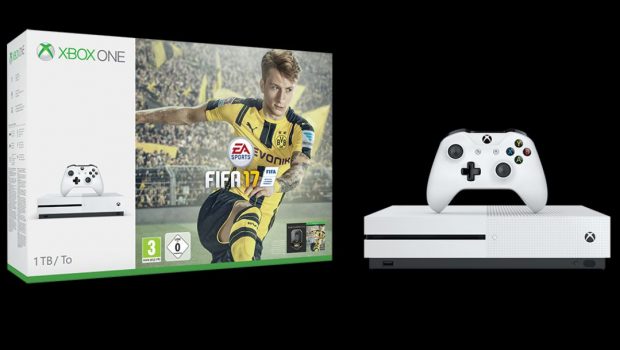 Today, in partnership with EA Sports, we’re excited to announce the ultimate way to experience EA Sports FIFA 17, the next installment of the most popular sports franchise in the world, with the Xbox One S FIFA 17 Bundles.

Coming to Europe, Australia, New Zealand, Canada and the U.S. beginning September 22 and packed with everything a soccer enthusiast needs to get ready for the season, the Xbox One S FIFA 17 Bundle comes with a full-game download of FIFA 17, three Ultimate Team Loan Legends, one month of EA Access and either a 500GB or 1TB hard drive (1TB version also includes an Ultimate Team Rare Player Pack) to play all the biggest blockbusters in Xbox history, at $399 AUD and $499 AUD respectively.

With EA Access, you’ll get to dive into FIFA 17 and live your story in FIFA 17’s The Journey on September 22, five full days before it launches – exclusively on Xbox One. Additionally, your EA Access membership gets you access to The Vault, a collection of awesome EA titles that are free during your month membership period. You also get 10 percent savings on all EA digital purchases, including FIFA Points to help build your FIFA Ultimate Team, and the chance to play a variety of upcoming EA games like Madden NFL 17, NHL 17 and Battlefield 1 for a limited time before their release along with the ability to keep your progress if you decide to purchase the game.

In addition to all of that, you can play over 100 console exclusives on the highly-anticipated and newly designed Xbox One S, which features one of the top 4K Ultra HD Blu-ray players on the market, 4K video streaming and High Dynamic Range (HDR) support for video and gaming. With all the biggest blockbusters this year, plus a growing catalogue of Xbox 360 backward compatibility titles, and the most advanced multiplayer network, Xbox One S is the ultimate games and entertainment system.

With FIFA 17, EA Access and Xbox One S, what more could you want? Head to the Microsoft Store or your favorite video game retailer and pre-order the Xbox One S FIFA 17 Bundle today!

For any images of the Xbox One S Fifa 17 Bundles, please visit the Xbox Wire.