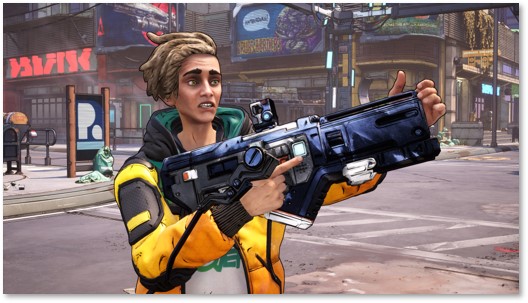 A spiritual successor to the beloved Telltale Games title, New Tales from the Borderlands is a brand-new game that carries forward the same sense of adventure and storytelling. Within the perpetually war-torn metropolis of Meridian City, players control three lovable losers on the worst day of their lives through deep, immersive story scenes, mini-games and free-walk sequences. Every choice that players make can affect how the story unfolds, often in unexpected ways.

“With concept and writing collaboration between talent who worked on the original Tales from the Borderlands and an all-Gearbox production team driven by the incredible creative leadership of Gearbox Studio Quebec, we’re stoked for everyone to play New Tales from the Borderlands,” said Randy Pitchford, founder of the Gearbox Entertainment Company. “The new storylines and characters will entertain newcomers to the Borderlands universe and those who have played and loved other Borderlands games.”

New Tales from the Borderlands contains a number of compelling narrative dynamics and features that bring the cinematic experience to new heights:

New Tales from the Borderlands is available in two editions: