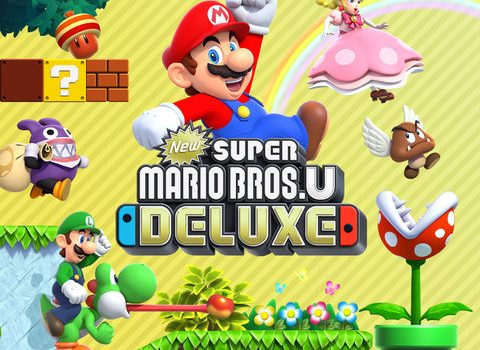 New Super Mario Bros. U Deluxe is the latest Wii U port to arrive on Switch. The classic 2D platformer that many would have missed due to the Wii U’s… ahem… shortcomings is now available on a console that isn’t hurting for quality platformers. So does a six-year-old game stack up against some of this generation’s best examples of the genre? For the most part, yes. New Super Mario Bros. U Deluxe has added a bunch of bells and whistles and most importantly, can now be experienced either on TV or on the go. This is the definitive experience. 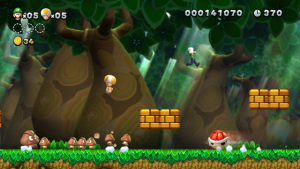 New Super Mario Bros. U Deluxe definitely recaptures the feeling of old school Mario games. As great as Odyssey is, it is comforting to return to the world maps of yesteryear. The over world maps are full of details and visual flourishes. They are also host to more obstacles and mini games than the 8 and 16-bit counterparts. The levels themselves follow in the same pattern. At first glance they are just a delightful throwback but multiple plays through reveal how jam packed with detail they are. There are hundreds of levels, and some enemies that only appear once throughout the game. There are multiple secret areas to explore in most levels and a lot of vertical exploration in addition to the traditional side scrolling. It’s classic Mario gameplay done right, and the fact that it’s six years old doesn’t make it feel any less vital. 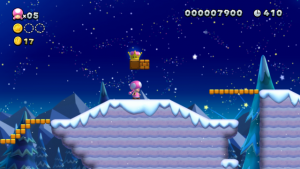 Let’s talk about the characters. In addition to Mario, Luigi, and Toad, New Super Mario Bros U. Deluxe adds a couple of new characters that change up the game considerably. The first of these is Toadette. Toadette is billed in-game as ‘easy mode’ but that description is reductive. Yes, playing as Toadette offers a more responsive and accurate set of moves than Mario or Luigi but it also opens up levels in ways that were previously inaccessible, or really damn hard to find. One of Toadette’s power ups turns her in to Peachette, a Princess Peach lookalike that opens up the game in thrilling ways. Peachette can jump higher, can boost her jump mid-air, she can float in mid-air with very precise control and swim faster. These features do technically make the game easier, but they also make levels infinitely more fun to explore and experiment with. I found myself boost jumping all the time just to see if levels had hidden pathways and more often than not my curiosity was rewarded. Toadette and Peachette are blasts to play with so don’t let any hard-core gamer aspersions get in the way of experiencing the game in a different way. 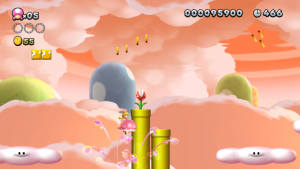 Nabbit is a different story. Selecting Nabbit enables the “very easy” mode designed for younger players but is almost offensive in how dull it makes the game. Nabbit cannot take damage from obstacles, which is admittedly a cool feature for young players. The main problem with Nabbit is that he also can’t use any power ups. This means no fireballs, no iceballs, no squirrel, nothing. Platforming related deaths can still kill Nabbit so it doesn’t really suck the difficulty out of the levels so much as the fun. Nabbit may be worth experiencing in the multiplayer mode with a first timer but really brings nothing to the single player experience. 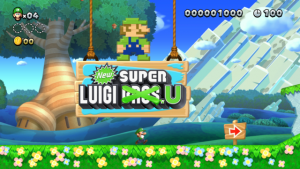 Speaking of difficulty, this is an extraordinarily balanced game. As a throwback to the NES and Super NES days, there will of course be plenty of breathless moments. There will usually be multiple expletives as you fail the same spots over and over again. There will also be the hollers of joy once you’ve mastered it. Nintendo wants the player to have a good time though, so, in addition to the inclusion of Toadette and Nabbit, they have also included a feature where Luigi will guide you through the stage. If you consistently fail a giant green block will appear and an AI controlled Luigi will navigate the level. You can assume control at any point or try from the beginning with the new knowledge gained. You can even skip the stage and come back later. It’s an intuitive way to get past the stages where you are truly stuck. You can always re-attempt them later as well when you feel up to it.

If you like a challenge New Super Mario Bros. U Deluxe also has you covered there. New Super Luigi U is included in the game and has a brutal difficulty spike. Luigi is slippier and less precise than Mario, and obstacles are more fiendish at every turn. New Super Luigi U also has a much harsher time limit that encourages players to take risks. New Super Luigi U will definitely have even the most hardened Mario players gripping their Joy-Cons with frustration. In addition to this, the Challenge Mode has a number of challenges that range from difficult to tear your hair out maddening. Ever wanted to see how many seconds you can last dodging fireballs from Koopas? Ever wanted to see how many enemies you can jump on without touching the ground? New Super Mario Bros. U Deluxe has you covered and the answer will always be way less than you thought. 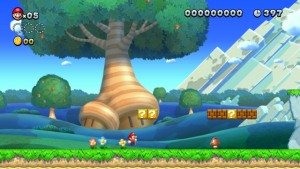 For all the grumbling about Nintendo’s strategy of releasing last-gen ports to their new console, it’s hard to argue when the games are as high quality as New Super Mario Bros. U Deluxe. Nintendo has also added their typically high gloss coat of paint, with new features, new characters and even an entire bonus game. Add in a frantic and fun multiplayer mode and the diabolical Challenge Mode and you have a game that can proudly stand with the best platforming games the Switch can offer.