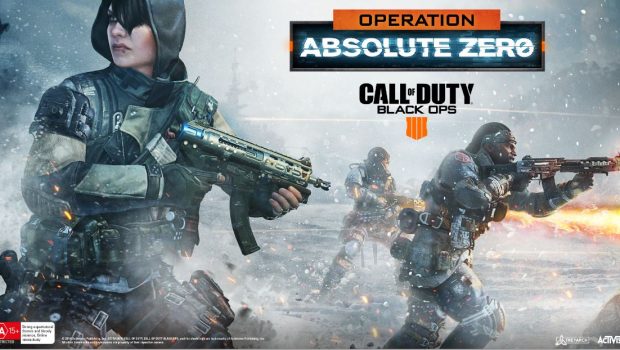 Dec. 12, 2018 – The new community celebration and seasonal event for Call of Duty: Black Ops 4 begins now on PlayStation®4, with other platforms to follow. Titled Operation Absolute Zero, the content drop delivers new content and game updates across all modes, including a new Specialist, new Blackout map location and vehicle, a special holiday-themed event, personalisation items and accessories, new gear and much more.

“Operation Absolute Zero is a giant community celebration and the next wave in our commitment to make Black Ops 4 the most supported game in our studio’s history,” said Dan Bunting, Co-Studio Head, Treyarch. “We’re bringing a ton of new content for the entire community to enjoy with Operation Absolute Zero, and we’re also delivering

updates to the game across the board that are directly inspired by community feedback that we’ve received since the game’s launch.”
“For Blackout, we knew that regular post-launch updates would be essential to keep the game world alive and evolving,” said Mark Gordon, Co-Studio Head, Treyarch. “Since the start of the beta in September, we have continuously used a combination of in-game telemetry and player feedback to help balance the gameplay experience and maintain the fun. In Operation Absolute Zero, we are making some changes to Blackout that we know fans will enjoy, including a brand new destination, and the map’s first new vehicle, which is an armoured ground vehicle with a turret machine gun. We are excited to go on this journey with our community – this is all just the beginning.”

• New Specialist – Players can reprogram the flow of combat with Zero, a new Specialist available in both Multiplayer and Blackout modes. Zero can disrupt and distract enemies with powerful hacking, altering the flow of battle.
• New Black Market Gear – Operation Absolute Zero brings a brand-new Assault Rifle and fast-firing SMG to the Black Market which players can unlock by playing through Contraband Tiers. Plus, fans can collect new tactical outfits, personalisation accessories, new characters to use in Blackout, and special gift-wrapped melee weapons – all in time for the holidays.
• New Blackout Location and Updates – Hijacked is the newest destination in Blackout, inspired by the intense classic multiplayer map from Call of Duty: Black Ops II. Fans can loot the luxury yacht to gear up for a firefight and battle opponents on their way to the final circle. Also, players can hop into a new armoured vehicle
called the ARAV once they’re back on dry land and eliminate enemies with its turret-mounted machine gun.
• New Festive Holiday Event – After Operation Absolute Zero arrives, the holidays will come to Blackout with special event tiers of seasonal items to unlock, thematic map decorations, and even throwable snowballs in Blackout that allow players to mount a festive assault on their enemies.
• New Zombies Features – Daily Callings provide new gameplay challenges that reward Zombies players with bonus XP and Nebulium Plasma upon completion, the Black Ops Authenticity Stamp system gives players the ability to verify and share the results of their game online with a personalised code generated at the end of each match, along with Daily Tier Skips for Zombies, which allow players to earn Black Market Tier progression bonuses by playing Zombies each day.
In addition to the Operation Absolute Zero free content, owners of the Black Ops Pass gain access to their first drop of content, available first on PlayStation®4:
• New Multiplayer Map, Elevation – A medium-sized map set in a cliffside town in the mountains of Nepal, Elevation features winding streets that snake around vertical positions where players will battle it out through close-quarter interiors and tight alleyways.
• New Multiplayer Map, Madagascar – A larger map set on a rural plateau in Madagascar, the town sits atop a hill where a medical-relief convoy that has been ambushed, and it is surrounded by flanking routes with diverse, natural environments and powerful cover for players trying to dominate the hill.
• New Zombies Experience, Dead of the Night – This all-new undead experience is set in 1912 and drops players into a lavish estate owned by the famed relic-hunter Alistair Rhodes, where they’ll step into the role of a new set of characters. As the
unlikely crew of heroes bands together, they’ll equip all-new weapons to fight the mysterious force that has taken over the party. Players will also take on a variety of Zombies, including new enemies such as vampires and werewolves, and much more, to survive the nightmarish evening. Dead of the Night stars an iconic cast of actors who lend their voice and likeness to the game: Madame Mirela (Helena Bonham Carter), Gideon Jones (Kiefer Sutherland), “The Brigadier” (Brian Blessed) and the Butler, Godfrey (Charles Dance).
• New Blackout Character, Reaper – Owners of the Black Ops Pass get instant access to the cyborg mercenary Reaper, a fan-favourite Specialist character from Black Ops III, now coming to Blackout.