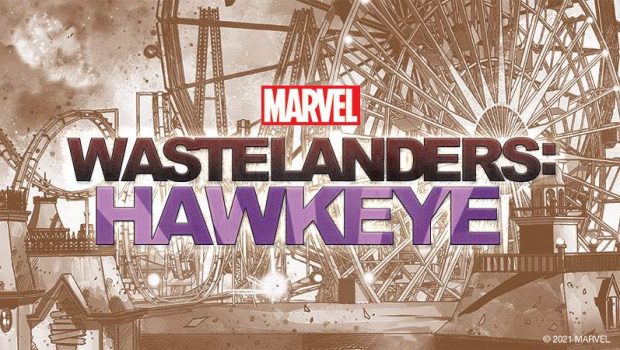 LISTEN TO THE SERIES TEASER HERE

Marvel’s Wastelanders: Hawkeye is the second installment in the Marvel’s Wastelanders audio epic. The 10-episode original scripted podcast series is written by J. Holtham (Jessica Jones), directed by Rachel Chavkin (Hadestown), with original sound design by One Thousand Birds, and an original score by James Harrison Monaco and JJJJJerome Ellis.

Thirty years ago, the villains of the world rose up and killed all the heroes. Well, all the heroes that mattered. The sole survivor of the Avengers, Hawkeye (Lang) is now a sideshow freak, re-living the worst day of his life for paying audiences. He’s surly, broken, and losing his sight, but there’s still that fire in him to be a hero, to avenge his friends. And he’s ready to do what needs to be done: killing every last person responsible for the deaths of those he loved the most.

When the Brotherhood Traveling Circus, Carnival and Ringmaster’s Road Show arrives at the Kingdom (in the territory formerly known as the southwest desert), Hawkeye gets an unexpected visitor, his estranged 17-year-old daughter Ash (Lane). On her own mission for vengeance after losing her best friend, Ash insists on following Hawkeye on his secret mission. In a world without heroes, Ash learns what a true hero can really be. Listen to the series teaser here.

“I’m thrilled for this next series set in the Wastelands! We were lucky enough to work on the show with a top-notch creative team, writer J. Holtham and Tony Award-winning director Rachel Chavkin, along with actors Stephen Lang and Sasha Lane to name a few members of the incredibly talented cast,” said Jill Du Boff, Director of Audio at Marvel. “This show is such a fun and wild ride, and we can’t wait for everyone to hear it!”

The series will be available exclusively on the SXM App and Marvel Podcasts Unlimited on Apple Podcasts. Episodes will be widely available two weeks later on Pandora, Stitcher, and all major podcast platforms in the U.S. Learn more at siriusxm.com/wastelanders.