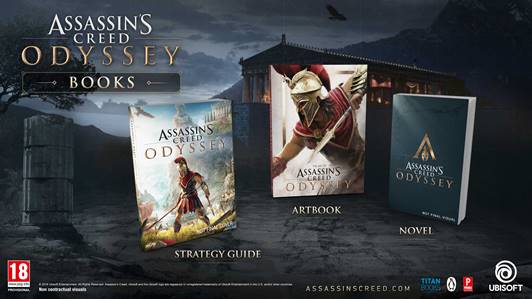 SYDNEY, Australia — June 21, 2018 — Ubisoft has announced the publishing line-up for Assassin’s Creed® Odyssey, including a novel, an art book and an official guide – all of which will be published worldwide starting this autumn. Through these books, fans will be able to step even further into the world of Assassin’s Creed® Odyssey as they deepen their knowledge of the game and its lore.

The broadening Ubisoft publishing collection aspires to provide fans with a wide variety of exclusive insights into their many worlds. The vast universe of Assassin’s Creed® Odyssey will be expanded beyond the game to explore: the main story from Kassandra’s point of view, the artwork behind the beautiful and unique regions of the Golden Age of ancient Greece, and an official strategy guide.

Published by Ubisoft and Penguin Random House, the novelization of Assassin’s Creed® Odyssey will tell the main story of the game from Kassandra’s point of view. Kassandra, a descendant of Leonidas, is caught in the turmoil of the Peloponnesian War. Because of the prophecy of an oracle, she was left for dead by her family and escaped from Sparta. 17 years later, now a mercenary in Kephallonia, an unexpected turn of events causes her to set sail across war-torn Greece on an Odyssey to reunite her family and confront the ones who tore it apart. The author, Gordon Doherty, is a Scottish historical fiction writer who previously wrote the Legionary series, set in the Eastern Roman Empire in the late 4th century AD, and the Strategos Trilogy, set in 11th century Anatolia.

The Art of Assassin’s Creed® Odyssey, an art book published by Titan Books, will take readers on an epic voyage into the Golden Age of ancient Greece, a pivotal period that shaped the world and still influences today’s societies. Readers will explore the world of Assassin’s Creed® Odyssey as they discover its regions and secrets, and learn more about Kassandra and Alexios, their armor, their styles and the weapons they use to ply their deadly trade. Concept sketches, texture studies, character art and fully rendered paintings are accompanied by insightful comments and notes from the artists and developers.

The Assassin’s Creed® Odyssey Official Collector’s Edition Guide, a guidebook published by Prima Games, is an indispensable tool for dedicated players. The guide contains a poster of the map, a special message to the fans, a general weapons and equipment guide, and a 100% completion walkthrough including the different branching stories, along with detailed maps flagged with all locations, collectibles and targets.

Assassin’s Creed® Odyssey is an ambitious role-playing game that places choice at the center of the experience. The action takes place in Ancient Greece, a world rich with myths and legend, in fifth century BC during the Peloponnesian War between Sparta and Athens. Embodying Alexios or Kassandra, a mercenary of Spartan blood sentenced to death by their family, players will embark on an epic journey from a young outcast to a legendary hero and uncover the truth about their mysterious First Civilization lineage.

Assassin’s Creed® Odyssey will be released worldwide on October 5, 2018 for the PlayStation®4 Pro and Playstation®4 computer entertainment systems, the Xbox One family of devices, including Xbox One X, and Windows PC. Digital Gold and Digital Ultimate Editions owners will have access to the game three days early, starting October 2.