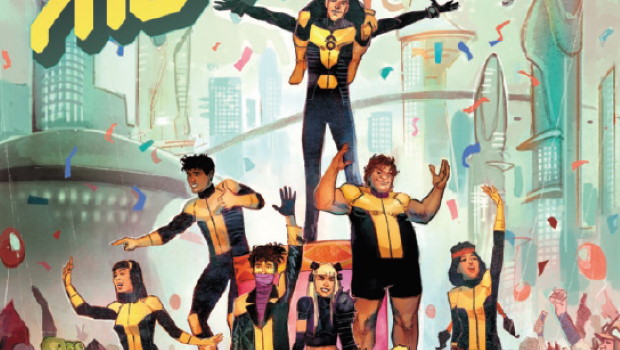 Summary: The New Mutants continue to take heroics in stride as they tackle an intergalactic power struggle while the young mutants of Krakoa imagine what their future holds.

If you are going to have a group thrust into the middle of an intergalactic power struggle… the New Mutants are probably a good group to have there, they should be able to deal with the situation… right? Back on Earth the more “seasoned” mutants are no doubt about to feel a bit less peaceful as the young mutants of Krakoa start to imagine what their future might hold.

Jonathan Hickman has a way with words. At this point I would not be surprised to hear some “duh”s… but what I mean by that is he is able to take a story that is perfectly fine and inject it with a great deal of personality. The characters within aren’t just going through the motions… their practically live streaming it and uploading to their snapchats as they go about their duty… at least that’s the feeling Jonathan elicits with his writing.

There are some truly lovely panels here, great use of colour and line work to really make the images stand out. There’s one page that has tones that remind me (and this could simply be from my dodgy older memory) of Mad Magazines from I guess the late part of the 70’s early 80’s. The colour and style just for some reason took me back to that era.

It’s nice to have a bit of a light hearted read from time to time… it’s even better when we can get that levity with characters that we love just doing their thing. It feels like this is more of a quiet point in a story line that could get a bit more frantic… but that just means this is a nice issue to slip into the story. Get to know the characters a little/more and have a fun read while you are at it. Worth picking up.