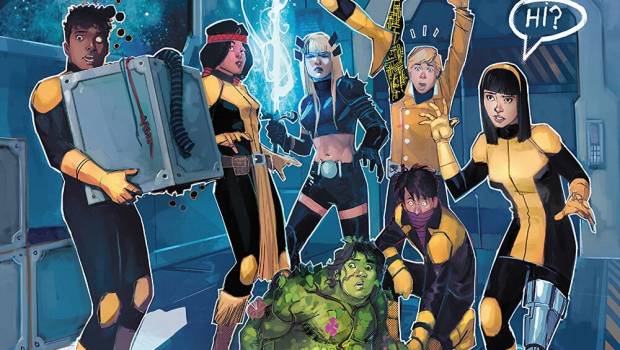 Summary: After reading a few more issues of this, I can honestly say this is the weaker storyline of the two that have been happening.

The team is rescued and plays Poker.

The Story: The teams stuck in space jail.

Background: Yet another team resurfaces.

Summary: Well, now they went and done it. After helping Corsair out, the team was left behind to be arrested by the Shiar Empire. Their lawyer is a talking iguana. Needless to say, he’s terrible at his job and the team is found guilty. They are remanded to the custody of the empire for the rest of their lives. Just as things look bleak, it turns out that the people from the empire they have been remanded to are none other than Cannonball and Smasher!

Everybody seems happy to see them except for Sunspot. To him, Cannonball hasn’t written, hasn’t tried to get in contact and his more or less just disappeared. His feelings are hurt. After Smasher punches him, his nose hurts too. She yells at him for being selfish and only thinking about himself. They left their baby at home, troops on the frontlines and a whole bunch of other stuff to come rescue them. He should be more grateful. He and Sam hug it out and all is well.

After a poker game, the team learns how they can carry out some of their sentence. Sort of, because while they have all been pardoned, they’ve all been recruited into the Shiar guard for the time being. They are going to be the escorts for none other Deathbird. The issue ends with Sunspot falling in love instantly with Deathbird. Oh boy…

Final thoughts: Confession time. I’d only read 2 issues of New Mutants before this series debuted. The first one was that one-shot a couple years ago and the only other one was decades ago when Sam was trying to make Boom Boom jealous and started taking the side of some red head who later betrayed them. I’m familiar with the team and who is in it but that’s about it.

Cannonball has always been one of my favorite mutants. My first time with his character is when he took on Gladiator alone and beat him. Heck, I think that was my first X-men comic. The rest of the characters I encountered in other books, whether it was generation X or the main X-men and US Avenger titles.

Cypher is also in my top 5 favorite mutants ever. He’s got such a passive power, but he’s learned how to take it and make it a weapon that is not to be messed with. He can understand any language, but that also means he can read body language and add that to self-defense skills, and you can’t touch him.

The team does gel nicely, which is to be expected considering all but two of them are from the first team. Chamber and new fellow named Mondo (who I don’t remember ever popping up outside this series) bring a nice outsider quality to the team. These people have been through hell and back and to them, these people probably seem a little nuts (as nuts as people with crazy powers could be after all the stuff they’ve gone through of course.)

After reading a few more issues of this, I can honestly say this is the weaker storyline of the two that have been happening. The art drives me a little batty (I like harder colors and lines) and the fact that Hickman decided to split these two storylines into 2 part segments is annoying. I don’t understand why we have to alternate back and forth every few issues. I’d rather see the whole story completed before moving onto another tangent. The art on the other storyline (which I won’t spoil here) is much brighter and vivid and honestly nicer to look at. This title still has time to work itself out (and since this is written so late, in many respects it already has.) But as of this issue, it needed a lot of work.