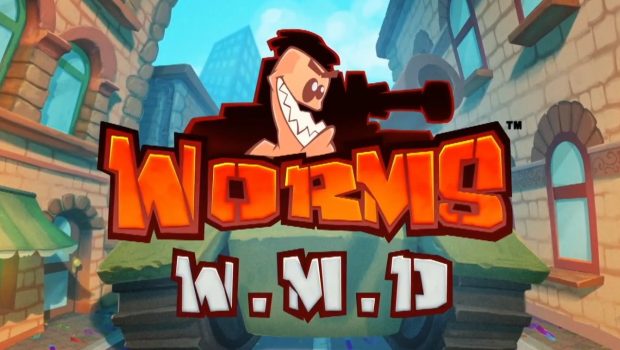 New launch trailer for Worms W.M.D that is out now

Check out the new launch trailer for Worms W.M.D.

The worms are back in their most destructive game yet. With a gorgeous, hand-drawn 2D look, brand new weapons, the introduction of crafting, vehicles and buildings plus the return of some much-loved classic weapons and gameplay, Worms W.M.D is the best worms experience ever.

Work your way through 30 campaign levels, 20 training missions and 10 challenge missions of increasing difficulty using the huge arsenal of new and classic weapons at your disposal. Use new vehicles to cause chaos amongst the enemy ranks and use buildings to gain the tactical advantage as you try to dominate the battlefield!

Take on up to five opponents in hilarious all-out tactical worm warfare with up to eight worms each, either in local or online multiplayer, including ranked play. Flatten your opponents with the Concrete Donkey. Turn them into chunks of worm meat with the Holy Hand Grenade. Rain down hell from above in helicopters or pound them into oblivion with the tank. With over 80 weapons and utilities at your fingertips, this is Worms at its chaotic best!

Worms W.M.D features:
• Extensive single player campaign including 20 training missions, 30 campaign missions and 10 challenges to complete and compete against your friends on the leaderboards with!
• Local and online multiplayer for up to six players with up to eight worms each!
• NEW Vehicles: Worm warfare gets serious with the introduction of vehicles for the first time in the series. Dominate the landscape in warfare-ready tanks, take to the skies to unleash hell from above in helicopters and navigate the landscape in the mech.
• NEW Buildings: Buildings are a fantastic new addition which offer a great tactical advantage to the classic Worms gameplay. Players can now enter buildings amongst the landscape and fire off shots from inside, but when the turn passes, their worm will be hidden inside.
• NEW Crafting: Weapons and utilities can be crafted during the player’s turn or even in between turns during online play, as the opposing teams take their turns. Crafting really expands the weapon set and adds in many brand new fun weapons including the Party Balloon, Luzi, Electric Sheep, Sticky Grenade and Concrete Angry Donkey to name but a few. Players will start the game with a specific amount of crafting ingredients, depending on which game scheme is chosen. Or none at all if they choose the Classic scheme! Further ingredients can then be collected from crafting crates or scavenged by dismantling existing weapons. Can’t reach the enemy worm and you’ve only got a Baseball Bat? Dismantle it and craft a grenade!
• New and classic weapons: Over 80 weapons and utilities at your fingertips, including many returning classics and a slew of new additions such as the Dodgy Phone Battery, the Unwanted Present and the OMG Strike.
• Mounted Guns: As if over 80 weapons and utilities wasn’t already enough! A range of different gun types are placed around the landscape, allowing your warmongering worms to do even MORE damage!
• Classic Worms physics and gameplay: Our brand new engine recreates the feel of the fan-favourite entrants in the series; and sees the reintroduction of the much loved Classic Ninja Rope!
• Wonderfully 2D: The best implementation of the Worms formula yet, now with a brand new worm, and gorgeous digitally-painted 2D artwork.
• Customisation! Customise your worm names, team names and look with a multitude of different fanfares, gravestones, hats, speechbanks and victory dances to choose from!
• Leaderboards and achievements/trophies

Worms W.M.D is out now for Xbox One via the Xbox Games Store, PlayStation 4 via the PlayStation Store and for PC* via Steam and GOG.