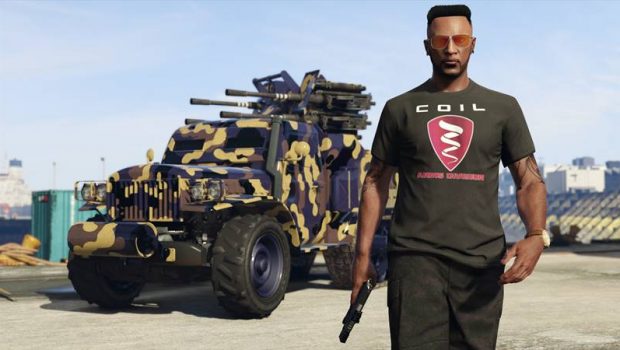 The XA-21 is the latest monstrous creation to escape Ocelot’s experimental underground facility, leaving a trail of shell-shocked and visibly aroused onlookers in its wake. Packed with enough hybrid tech to make environmentalists salivate, the XA-21 is the epitome of cutting edge – now available exclusively at Legendary Motorsport.

Fan favorite modes Sumo and Slasher are dishing out Double GTA$ & RP this week through August 21st. For those who prefer to make ends meet by pushing high tech armaments through the streets, Gunrunning Sell Missions will also provide Double GTA$ & RP payouts. As an added bonus, players who complete a Sell Mission between now and August 21st will be rewarded with the slick Black Coil Tee.

Every criminal mastermind worth their salt is constantly on the lookout for new business opportunities, and an underground arms-dealing operation is the perfect venture to diversify your portfolio. Starting today, Maze Bank Foreclosures is striking 25% off the Route 68 Bunker purchase price through August 21st. Acquiring a Bunker unlocks a whole new suite of manufacturing and sales activities, your own personal shooting range to sharpen your marksmen skills along with ways to tighten your grip on Southern San Andreas — including access to the Mobile Operations Center with the Weapon Workshop bay where you can give your arsenal a boost with exclusive Mk II weapons upgrades.

From the amphibious, turret-wielding APC to the road-clearing Phantom Wedge, Warstock Cache & Carry is discounting a smattering of heavy hitters this week to help you skewer the competition. Take 25% off the following through August 21st:

And if you’re going to be running guns across the state, you need to make sure you look the part – this week only, take 25% off all Gunrunning Clothing & Tattoos.