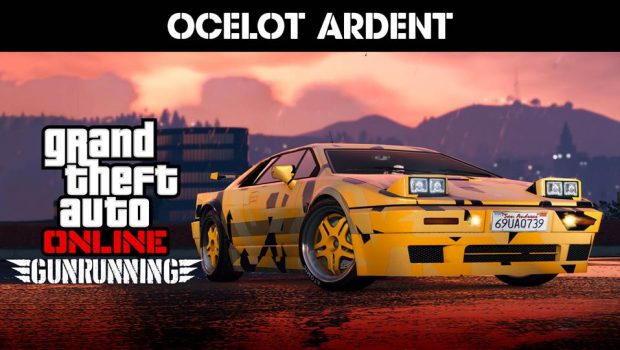 New in GTA Online: The Ocelot Ardent Plus Bunker and Vehicle Discounts

The mad scientists at Ocelot are back with another automotive beast – The Ardent. Effortlessly suave and equally ferocious, the Ardent pairs some good old-fashioned front-mounted machine guns with retro aesthetics. Pick up yours today from Warstock Cache and Carry.

From variations on Juggernaut to Resurrection, jump into the Bunker Series playlist or launch any Bunker-based Adversary Mode to earn Double GTA$ & RP through August 28th. If you’re more at home behind the wheel, run wild in the explosive Vehicle Vendetta Adversary Mode, dishing out double GTA$ & RP rewards as well.

Stack some extra paper by selling boosted exotic vehicles as Vehicle Cargo Sell Missions are doling out double payouts. If you’re yet to start trading out of a Vehicle Cargo Warehouse, be sure to take advantage of a 25% price drop running this week.

And whether you’re gunning down your foes through the cavernous halls of a Bunker or peddling luxury vehicles to buyers across the state, your Bunker R&D team will be firing on all cylinders as Research and Manufacturing speeds are boosted 25%.

The illegal arms trade is the perfect arena for the vicious and ambitious – and with Maze Bank Foreclosures striking 25% off the Smoke Tree Road Bunker, there’s all the more reason to get your hands dirty.

And what better place to plot your illicit affairs than from behind your floor-to-ceiling window on high in the Maze Bank Tower? Now through August 28th, Dynasty 8 is offering 25% off ALL Executive Offices.

Live the high life for less with 25% off the following vehicles: