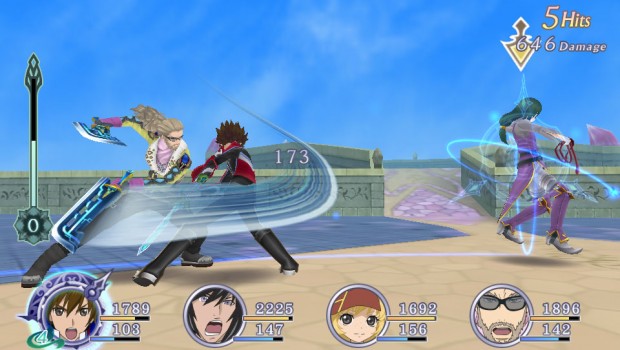 NEW DETAILS ON THE UPCOMING TALES OF HEARTS

SYDNEY (June 11, 2014) – After revealing Tales of Hearts R during its showcase event in Berlin during April 2014, BANDAI NAMCO Games Europe is proud to reveal new details for its upcoming hit on PlayStation®Vita.

“We received lot of feedbacks from fans to release Tales of Hearts R and today we are really happy to announce that the game will get an original Japanese Voice-Over along with EFIGS subtitles to please all the fans”! said Hideo Baba. Thanks to this choice, J-RPGs fans will enjoy this amazing tale and dive within its beautiful meanders.

Tales of Hearts R follows the story of Kor Meteor, a brave young man living in a small village by the sea, as he sharpens his fighting skills under the watchful eye of his grandfather. Impressed with Kor’s growing skill, his grandfather bequeaths to him a special type of weapon known as a Soma. Soma users must possess exceptionally strong Spiria, the source of all life from which the human mind and will are derived.

Armed with his Soma, Kor soon encounters a young woman named Kohaku Hearts who has been placed under a spell by a mysterious witch. As Kor attempts to lift the spell, he accidentally shatters Kohaku’s Spiria Core, the source of her emotions. Kor must set out on a journey to find a way to make Kohaku’s Spiria whole once more.

When it comes down to innovation and new means to excite J-RPG fans; TALES OFTM  dev. teams’ ideas are always top-notch. Starting from the praised “Linear Motion Battle System”, the Japanese brilliant minds managed to build the “Aerial Chase Linear Motion Battle System.” Players will be able to see this exciting new feature through the screenshots and see how they can move freely in the air and experience fast-paced aerial battles that will be sure to blow enemies away.

Tales of Hearts R is scheduled for release across Australia & New Zealand on the PlayStation®Vita in Summer 2014. For more information regarding Tales of Hearts R and the TALES OF franchise please visit, TalesOfGame.com, www.Facebook.com/Tales,http://www.twitter.com/TalesofUand www.BandaiNamcoGames.com