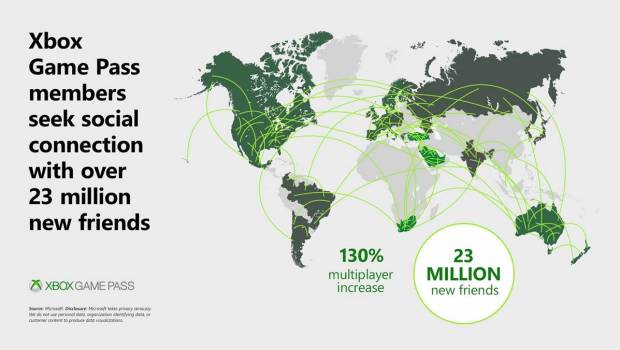 Today, Xbox detailed new data detailing on how people are coming together through videogames and through Xbox Game Pass.

The new data showed that:

For many of us, the current global health situation has made it more difficult to spend time with friends, family, and the people we care about most. We are heartened to see many people using games to be entertained, to find inspiration, and to strengthen social connections through shared adventures.

At Xbox, our mission has always been to bring you the best games to play, with the people you want to play with. That’s why we created Xbox Game Pass, a community with unlimited access to a curated library of over 100 great Xbox console and PC games.

We’re excited by the response to Xbox Game Pass and yesterday we announced that Game Pass now has over 10 million members from 41 countries worldwide.

Xbox Game Pass inspires a new era of gaming – where the community with the same Game Pass plan can play a large common catalogue of the best games, discovering new titles and experiences together. With Game Pass, we want to answer the question: what to play next with my friends?

We’re still early on this journey, and in the last two months we’ve seen how important gaming can be to our community.

Since March, Xbox Game Pass members have added over 23 million friends on Xbox Live, which is a 70% growth in friendship rate. Game Pass members are also playing twice as much and engaging in more multiplayer gaming, which has increased by 130%.

Xbox Game Pass is empowering players and their friends to branch out and discover new games they might not have played before. We know this because after joining Game Pass people play 40% more games and more than 90% of members have played a game they wouldn’t have tried without Game Pass – often discovering new genres they have not yet experienced. This speaks to our passion at Xbox for sharing and celebrating the games that we love and for showcasing works, from blockbusters to indie developers with unique points of view.

The Xbox Game Pass library includes some of the biggest blockbuster franchises like Forza, Gears of War, Halo, Minecraft, NBA 2K, and The Witcher. It also includes dozens of high-quality games from independent developers, and 30% of our most popular games are family friendly titles like Kingdom Hearts III, Ori and the Will of the Wisps, and Sea of Thieves.

We’re humbled by the reception to Xbox Game Pass. It’s changing the way we play and discover games together, and it inspires us on our journey to help people connect through gaming.

We’re also inspired to deliver you our fastest, most powerful console ever that will set a new bar for performance, feel, speed and compatibility when it releases this holiday; as well as a library of games from our 15 Xbox Game Studios and thousands of development partners around the world. Later this year our cloud game streaming technology, Project xCloud, will come to Game Pass—so you and your friends can stream and play the games you love together on your devices.

I’ve always believed gaming has a unique power to bring us together, and I’m proud of how our artform is introducing this unique power to more people during a time of need. I have no doubt that we’ll come through this experience stronger than ever.