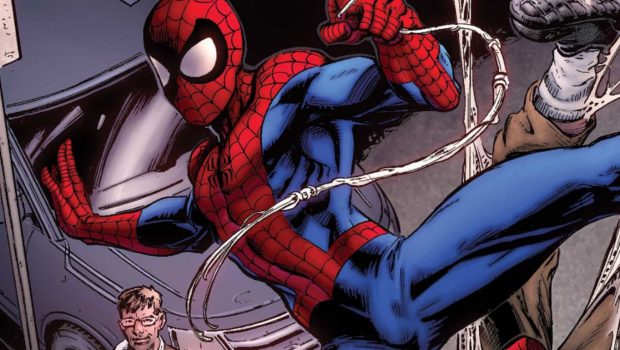 Since the very beginning, The Daily Bugle has been an essential part of Spider-Man’s adventures and now, the Marvel Universe’s chief newspaper will be headlining a thrilling new limited series! AMAZING SPIDER-MAN: DAILY BUGLE will give readers an inside look at the ever exciting world of investigative journalism as Robbie Robertson follows a lead into Spider-Man and Kingpin’s past. And like any great news story, this series will have revelations that will change the way you view Spider-Man forever as Robbie discovers a secret that will affect anyone who’s ever come into contact with the web slinger!

Spanning five issues and tackling events from Nick Spencer’s current run on AMAZING SPIDER-MAN, this tale will be chock full of twists and turns as the Daily Bugle dig into the past to uncover the deadly truth. Guiding us on this winding journey will be writer Mat Johnson(Hellblazer Special: Papa Midnite, Incognegro, Loving Day) who will be making his Marvel Comics debut as well as Mack Chater, known for his acclaimed work on books like BLACK PANTHER AND THE CREW! This will be one story worth chasing and you can read all about it this January!

SPINNING OUT OF AMAZING SPIDER-MAN!

The journalist must speak truth to power—whether or not it’s wielded responsibly. Helmed by Peter Parker’s mentor, Robbie Robertson, the Daily Bugle staff is at last chasing stories that matter. And in a city under Mayor Wilson Fisk, keeping the public informed is as essential as it is dangerous. Weaving between events in AMAZING SPIDER-MAN and DAREDEVIL, Mat Johnson (Hellblazer Special: Papa Midnite, Incognegro, Loving Day) and Mack Chater (BLACK PANTHER AND THE CREW, Briggs Land) are following a lead into Kingpin and Spider-Man’s past that will change the way you look at the webslinger now, and as his story continues.