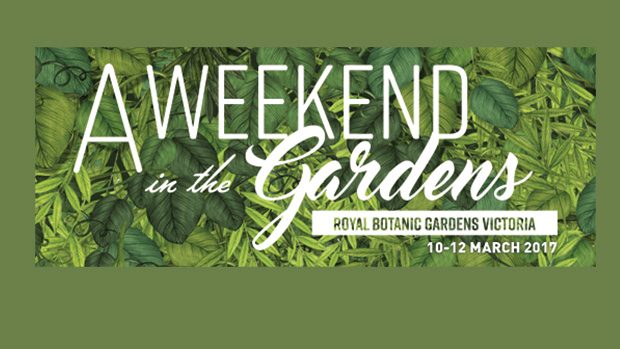 Melbourne’s iconic Royal Botanic Gardens is set to come alive with music with the announcement today of a brand new concert event beginning next year – A WEEKEND In The Gardens.

Developed by the team behind the highly successful A Day On The Green winery series, A WEEKEND In The Gardens’ inaugural event will take place on the March Long Weekend with three amazing concerts on Friday March 10, Saturday March 11 and Sunday March 12.

A WEEKEND In The Gardens is all about bringing music lovers to the Gardens to enjoy the beautiful environment on a summer’s night while experiencing great live entertainment.

John is thrilled to be headlining the opening concert on Friday March 10.  He will be joined by two more of Melbourne’s favourite sons – Daryl Braithwaite and Ross Wilson.  We couldn’t think of three better local legends than John, Daryl and Ross to kick off this stellar new event.

On Saturday night, a younger audience is invited to the Gardens with the wonderful Boy & Bear heading up a line-up featuring San Cisco and Amy Shark.

A WEEKEND In the Gardens is far more than just the music. To enjoy this special location, a major feature of the event will be “The Eatery” – an area adjoining the site with a variety of high quality food and drink stalls where patrons can chill out in a relaxed and vibrant space. Foodies will be tantalised with offerings from Ladro, Burn City Smokers, The Royale Brothers and Pommery Champagne & Oyster Bar to name a few!

A WEEKEND In The Gardens is also pleased to have the Gardens’ acclaimed Jardin Tan restaurant join this special event.  Located immediately behind the concert area, Jardin Tan will offer a VIP Canapes package.

Roundhouse Entertainment Director Michael Newton said: “Melbourne’s Royal Botanic Gardens is world renowned and we are thrilled to produce what we hope will be some very special concerts for the inaugural event in March and beyond.”

Robin Penty, Executive Director Public Engagement and Business Development at Royal Botanic Gardens Victoria says: “A WEEKEND In The Gardens is a wonderful new event for our Melbourne Gardens. This concert series is a perfect fit for our new programming focus, welcoming new and diverse audiences to our site at the heart of the city.”

With its central location, A WEEKEND In The Gardens is sure to be a warmly welcomed by music lovers and to become a highly-anticipated event on the Melbourne concert calendar.

Whether it’s the hits from his landmark 80s albums Whispering Jack and Age Of Reason like You’re The Voice, Two Strong Hearts, Pressure Down, A Touch Of Paradise, Chain Reaction, That’s Freedom or his earlier material Sadie The Cleaning Lady, One and Raindrops Keep Falling On My Head, there are few Australian performers who are as beloved as ‘Farnsy’.  That was evident when John took the stage at the ARIA Awards to mark the 30th anniversary of the 24-platinum selling Whispering Jack and brought the house down with a rousing rendition of You’re The Voice.

From Sherbet days to his hugely successful solo career with the multi-platinum albums Edge (1988) and Rise (1990), Daryl remains one of the country’s favourite performers.  Hits like As The Days Go By, One Summer, Summer Love, Howzat, Higher Than Hope remain classics and who doesn’t love belting out  Horses!   Daryl has continued to do what he loves best – performing to his hordes of fans across the country.  His most recent album Forever The Tourist shows the silky voiced singer remains in top form.
ROSS WILSON

In a career that spans five decades , Ross remains one of this country’s most respected artists. From Daddy Cool to Mondo Rock, as a solo artist, or as songwriter of A-grade classics such as Eagle Rock, Cool World and A Touch of Paradise, or producer of the legendary Skyhooks, Jo Jo Zep and  The Screaming Jets, Ross’s involvement with success has continued unabated and – thankfully – he’s showing no signs of slowing up!

Boy & Bear’s 2011 debut album Moonfire announced their arrival big time winning 5 ARIA awards and grabbing 3 songs on the Triple J’s Hottest 100 – and it’s safe to say they’ve never looked back!  2013’s Harlequin Dream and 2015’s Limit Of Love both debuted at #1 on the ARIA charts. The indie-rock faves have played literally hundreds of shows around the world, prompting a recent Tour Edition of Limit Of Love, recorded at Sydney’s Hordern Pavilion.

San Cisco has just gifted fans the first taste of their eagerly awaited third album with the irresistible new single SloMo. Guaranteed to entice a shimmy and a grin, SloMo is another slice of perfect pop and whets the appetite for the new album due early in 2017.  With past hits Fred Astaire, Wild Things, Too Much Time Together and the hugely successful Gracetown album, San Cisco’s live shows are always joyous affairs.

Gold Coast born and bred, the musically contemplative and soulfully brooding Amy Shark can best be described as the creatively complex girl next door. Her recent single Adore is on high rotation on triple j where she recently featured as the Unearthed Artist of the Week, while past single Golden Fleece won the 2016 Queensland Music Award for Pop Song of the Year. With support slots under her belt with Matt Corby, Dylan Joel and The Delta Riggs, Amy’s music is striking a chord with many.

In 2017 ICEHOUSE celebrate 40 years of live performance. With an amazing 28 platinum albums, eight Top 10 albums and over thirty Top 40 singles, their music continues to be loved by audiences across the generations.  From early Flowers’ hits Can’t Help Myself and We Can Get Together to  ICEHOUSE classics Hey Little Girl, Great Southern Land, Electric Blue, Man of Colors , the Iva Davies-led band remain one of Australia’s most influential and revered.

For more than three decades, James Reyne songs have been the sound of the Australian summer. His unforgettable hits conjure images of sun, surf and sand, and along the way, he’s sold more than two million albums.  Songs like Reckless, Boys Light Up, Motor’s Too Fast, Beautiful People, Daughters Of The Northern Coast and Slave are indelibly stamped on the Australian consciousness. Luckily for us, James has never been in better form.

Clare Bowditch is an ARIA Award-winning songwriter, sometimes actor (as Rosanna Harding on the hit Channel 10 show “Offspring”), speaker, writer, creative-business mentor and of course, popular afternoon host on Melbourne’s ABC radio 774.  Her beautiful music combined with her warmth, humour and sharp intellect on stage has endeared her to audiences everywhere.  Clare promises her eighth album will be released in 2017 (with apologies for the wait!)