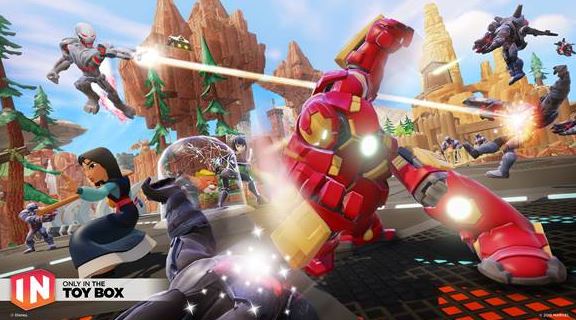 Character Highlights for All New Figures Include:

ULTRON: Ultron, the world’s most advanced robot and maniacal Super Villain, will stop at nothing to destroy humanity and their protectors, the mighty Avengers. With the ability to summon duplicate robotic sentries, the character uses magnetic pull followed by a powerful blast of energy to defeat his foes.

HULKBUSTER: Hulkbuster, the mega-sized armor created by Tony Stark, combines the incredible force of Hulk with the tech capabilities of Iron Man.  A brute tank, Hulkbuster’s powerful combo attacks are great at dealing with nearby groups of enemies while his Thruster Dash makes up for his lack of overall speed, allowing him to close distance with targets easily.  Missiles, thrusters for flight and a suit-integrated tractor beam complement this powerhouse.

DARTH MAUL: The deadly Darth Maul uses his double-bladed Lightsaber™ and dark side Force™ powers in death-defying duels against his enemies.

SPOT: Spot is a wild, tough and tenacious human boy who thinks and acts like a dog. Using his hands, feet and teeth he keeps enemies at bay, DisneyPixar’s The Good Dinosaur Power Disc Pack comes with four Power Discs that introduce dinosaur mounts to the Toy Box.

The Disney Infinity 3.0 Starter Pack, which includes the Star Wars™ Twilight of the Republic Play Set, is currently available in major retail stores for the PlayStation®4 and PlayStation®3 computer entertainment systems, Xbox One and Xbox 360 and the Wii U™ system from Nintendo.  Disney Infinity 3.0 is rated PG for mild violence and online interactivity and developed by Avalanche Software in partnership with Ninja Theory, Sumo Digital, Studio Gobo and United Front Games.  Additional Play Sets, Figures and Power Discs are available and sold separately.