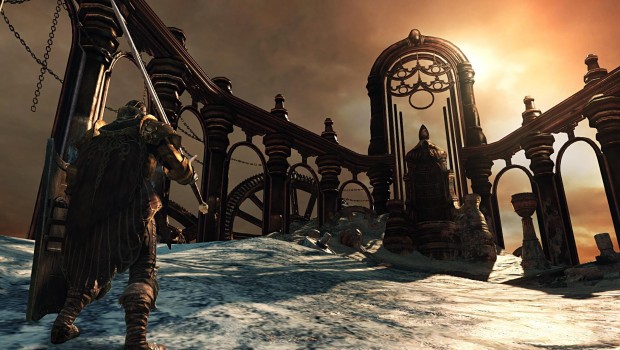 SYDNEY, AUSTRALIA – June 5, 2014 – BANDAI NAMCO Games Europe S.A.S and FromSoftware today announced the impending arrival of three new DLC chapters to the critically acclaimed DARK SOULS II for the PlayStation®3 computer entertainment system, Xbox 360 games and entertainment system from Microsoft, and PC. These three new DLC chapters known as The Lost Crowns trilogy will take DARK SOULS II fans through entirely original areas to face a slew of unknown enemies, overcome diabolic challenges, and take-on fearsome bosses. Crown of the Sunken King, the first chapter in this DLC trilogy, will be available in Europe and Australasia on July, 22, 2014 for PC and Xbox/July 23 for PlayStation®3, followed with the DLC launches of Crown of the Old Iron King on August 26, 2014 for PC and Xbox/ August 27 for PlayStation®3 and Crown of the Ivory King on September 23, 2014 for PC and Xbox/ September 24 for PlayStation®3. A Season Pass program is also available for the entire The Lost Crowns trilogy via Steam for PC and PlayStation®Network for PS3TM from today.

Crown of the Sunken King, the first chapter in the trilogy, sends players on a journey to reclaim the crowns that Drangleic’s King Vendrick once owned. Crown of the Sunken King features an entirely different world within the DARK SOULS II universe, where stepped pyramids span a vast underground cavern. It is said that one of the ancient crowns lay buried deep within these dark caverns; but surely such a valued item cannot sit unguarded. Players that seek adversity and glory will be rewarded with a crown that holds the strength of lords from times long past.

DARK SOULS II is the critically acclaimed and punishing sequel to 2011’s hit Dark Souls. The game has been lauded by critics and fans alike to be one of the most challenging and rewarding experiences in videogame history. Having earned a 92 Metacritic score for the Xbox 360 as well as 91 Metacritic scores for the PlayStation®3 system and PC versions of DARK SOULS II; The Lost Crowns trilogy will present a new assortment of creatively designed challenges and organic storytelling that will give players the sense of achievement and emotional gratification the franchise has become famous for.

DARK SOULS II is available in Europe and Australasia for the PlayStation®3 computer entertainment system, the Xbox 360® games and entertainment system from Microsoft and PC. For more information on DARK SOULS II please visit http://www.darksoulsii.com and http://www.facebook.com/darksouls. To learn more aboutBANDAI NAMCO Games Europe other products go to: www.BandaiNamcoGames.com.au