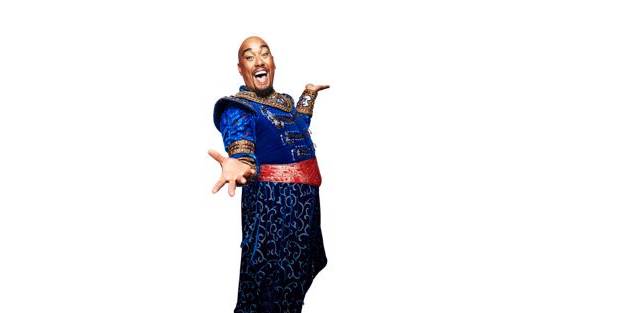 Disney Theatrical Productions is delighted to confirm Melbourne’s Gareth Jacobs, current standby Genie in Disney’s Aladdin, will take over the role full-time from Tuesday 19 December 2017. Helpmann award-winner Michael James Scott originated the role in the Australian production and will pass on the magic lamp after almost 18 months as the show-stopping Genie.

Frankston-born Gareth Jacobs trained in musical theatre at the University of Ballarat in country Victoria and honed his skills on the high seas as lead vocalist and vocal captain for Royal Caribbean International and Celebrity Cruises. He was a Top 24 contestant on The X Factor and played the role of Jimmy Early in StageArt’s Dreamgirls. He has been understudying Genie, Sultan and Babkak in Disney’s Aladdin since the Australian premiere in August 2016.

Gareth said; “To play the Genie in this phenomenal production really is a wish come true. I’m a huge fan of the original animated Disney film and to learn the musical ropes from the magical Michael James Scott has been an added blessing. I can’t wait to move into the lamp permanently and get granting those wishes full-time – you ain’t never had a friend like me!”

The dazzling new production from the producers of The Lion King and Mary Poppins is now playing at Melbourne’s Her Majesty’s Theatre where it will remain until 28 January 2018 before the magic carpet takes flight on 25 February 2018 in Brisbane, and 19 July 2018 in Perth.

Based on the Academy Award®-winning animated film, Aladdin made its world premiere to critical acclaim at Broadway’s New Amsterdam Theatre on March 20th, 2014. It quickly established itself

as one of the biggest new blockbusters in recent years, breaking 12 New Amsterdam Theatre house records and welcoming over five million people worldwide. Its global footprint has expanded to include productions in Tokyo, Hamburg, London and a tour across North America.

Aladdin,adapted from the Disney film and centuries-old folktales including “One Thousand and One Nights,” is brought to fresh theatrical life in this bold new musical.  Aladdin’s journey sweeps audiences into an exotic world of daring adventure, classic comedy and timeless romance.  This new production features a full score, including the five cherished songs from the Academy Award-winning soundtrack and more written especially for the stage.

The film won the Oscar for Best Original Score and introduced the hit song “A Whole New World,” which won the second of the film’s two Academy Awards as Best Original Song.  The Peabo Bryson/Regina Belle recording of the tune soared to #1 on the Billboard Hot 100 chart.

The musical made its Australian premiere in Sydney on 11 August 2016. Tickets for the Melbourne, Brisbane and Perth seasons are available from aladdinthemusical.com.au.