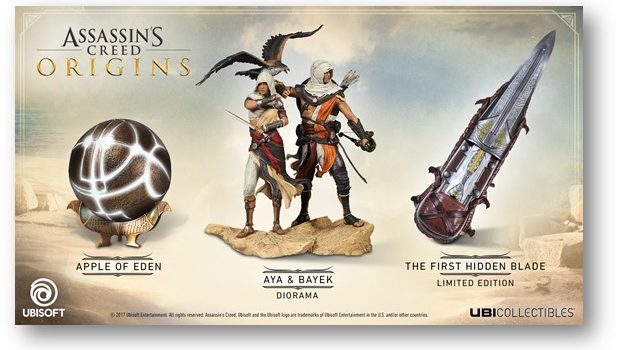 To complete the Ubicollectibles Collection, a series of exclusive items

Sydney, Australia – September 7, 2017 –Ubisoft has announced that fans of the Assassin’s Creed universe will be able to take home two new Ubicollectibles figurines by purchasing them on the Ubisoft® Store starting October the 27th.

The figurine of Aya and the Hidden Blade will enrich the collection of the Bayek figurine and the Apple of Eden previously announced.

Each item have been crafted by hand for several months using 3D models from the game to offer premium quality. They are highly detailed pieces enhanced by a set of discernible textures and materials such as PVC or ABS.

Bayek is a Berber-Egyptian. As a Medjay, he is one of the last in a long line of protectors of Ancient Egypt. Personal tragedy forced him to leave his home town and travel through Egypt. His journey will lead to the creation of the Brotherhood of Assassins.

Among the most coveted Pieces of Eden, Apples are powerful artefacts designed by an ancient civilization to ensure humanity’s subservience, potentially allowing control over a subject’s thoughts, emotions and behavior.

During his long journey through Egypt, Bayek quickly uses this weapon as a faithful and lethal ally. Bayek’s Hidden blade is known to be the first one ever among the Assassin’s Brotherhood.