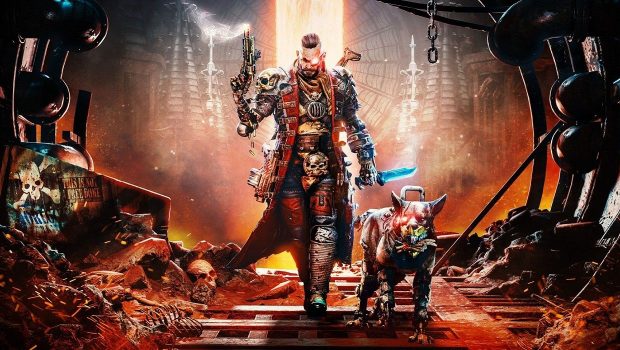 Summary: After spending some intimate time with Necromunda: Hired Gun, I can only describe the game as incredibly average. Its really flawed and fun parts cancel each other out in a near-perfect way leading to one of the most middling experiences I've had this year.

Necromunda: Hired Gun is perhaps the most average game I’ve played this year. It’s a game that has many issues to work out, yet one that was fun to play regardless. The game takes place in the familiar Warhammer universe. Only this time, the influences are kept to a moderate amount. While fans will recognize many signature aspects of the series, the story is a standalone experience.

In Necromunda: Hired Gun, you play as a mild-mannered bounty hunter who everyone’s out to get due to them constantly blasting their way through a variety of gang wars. That’s unfortunately all I can say about the story as everything else is executed so poorly it left little to no impact on me or my memory even after playing for about eight hours through twelve chapters. This is simply because each narrative section of Hired Gun only felt like one excuse after the other to resume disrupting gangs and blasting faces. As a result, it does a poor job of setting up a foundation for its story and fails to keep the player engaged from the onset. What’s worse, it confuses the player by constantly referring to multiple characters you know nothing of, and you’re given little reason as to why you should care about them. 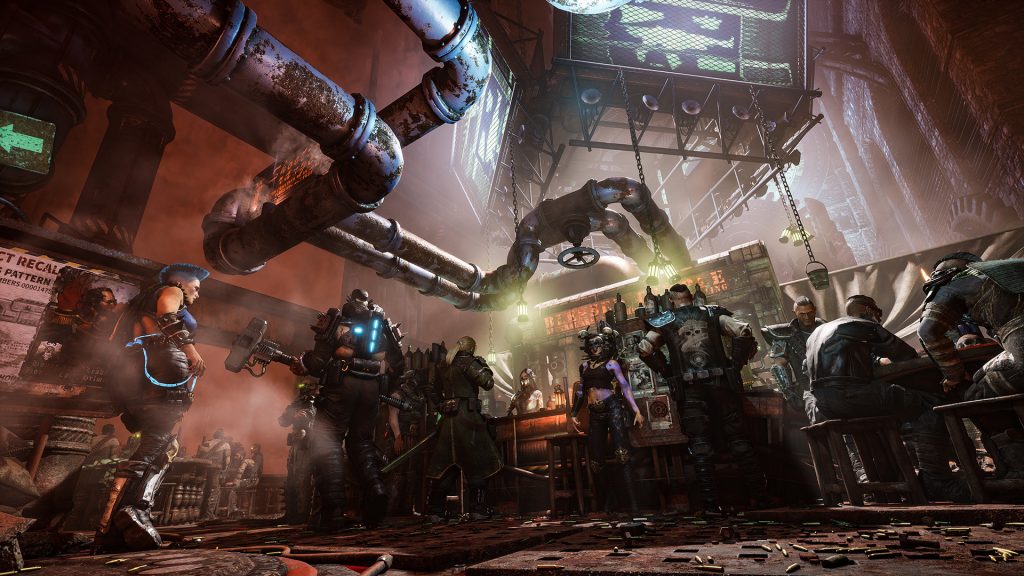 Luckily the game’s other elements do a better job of entertaining the player. After the confusing prologue, players are dropped into the game’s hub world, which is a neutral ground for all manner of folk, good or bad. This is where the game’s environmental storytelling shines in contrast to its lackluster plot. As neutral ground, you’ll see multiple characters of various races and groups consorting with one another. Whatever action the player takes in the story reflects on the world, as you’ll often hear these characters talking about your recent bloody conquests.

The hub world also serves as a den for players to find information on their next mission by constantly talking to the same three characters, and to choose whatever side missions are available. While the main missions are straightforward, the side missions (labeled as contracts) all include varying ranks. The higher the rank, the higher the difficulty. Players can also buy weapons, items, and all manner of augments in their downtime in the hub world. 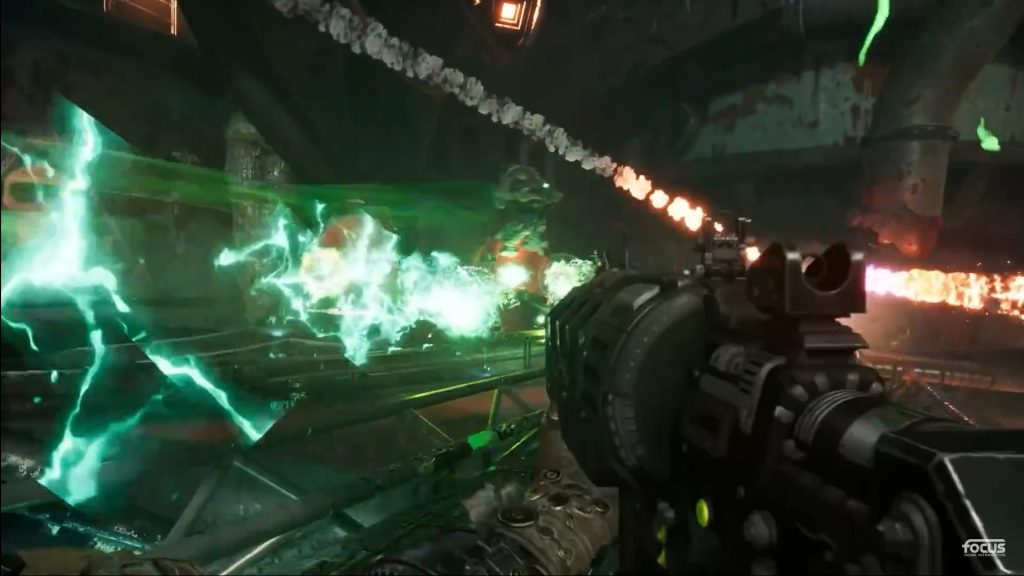 Alter getting efficiently strapped, players select their next mission and are dropped into a new area of the game where said mission takes place. Thankfully, Hired Gun’s Doom-esque gameplay, complete with wall runs, dashes, and grappling hooks, holds most of the player’s attention in the game. To put it simply, combat is a swift, bloody gorefest. Players have a respectable variety of weapons to choose from, each with different stats. Using augmentics, while not consistently effective, is fun and sometimes useful, and executing epic melee attacks to kill enemies never gets old. However, it’s worth noting that this feature is kind of broken as it’s easy to damage an enemy, go through an invincible killing animation thanks to iframes, attack the next enemy in line, rinse and repeat. Only a few enemies with considerable armor are immune to this. 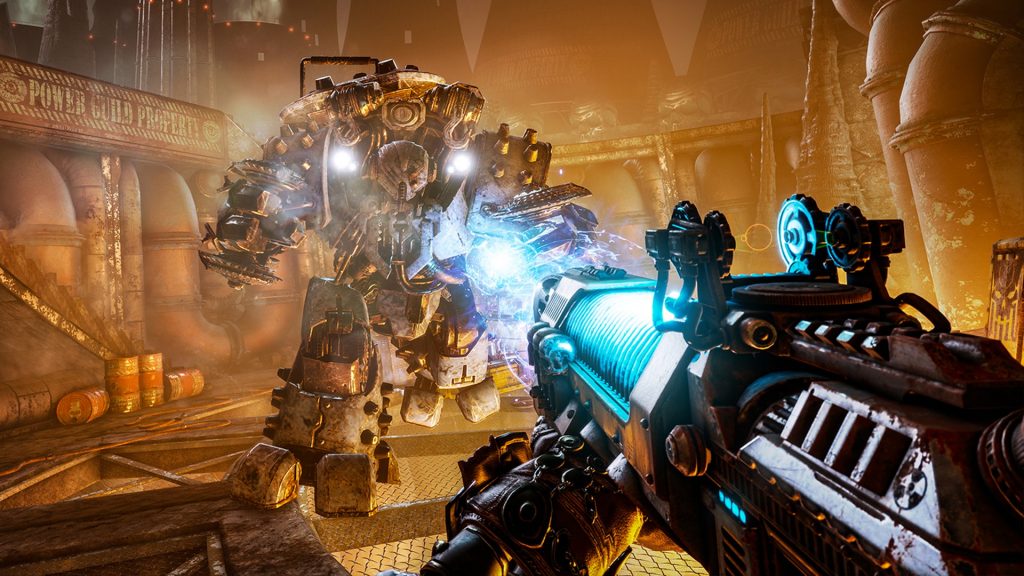 Hired gun’s gameplay is also incredibly buggy at times. The enemy AI is dumber than a bag of bricks, often standing aimlessly accumulating lead, the game freezes and clips, and some guns have sensitivity issues. What’s more, the combat starts to get sale near the end and offers less challenge than expected, so FPS fanatics might want to crank up the difficulty on this one.  All that said, I still admittedly had fun blasting and bludgeoning the game’s variety of enemies, and the fast-paced combat and movement speed made it all the more satisfying.

What’s more, Hired Gun’s environmental designs are impressive and really cements its Steelpunk aesthetic. The character designs are also nothing to scoff at as each outfit looks unique and accurately represents the gangs and enemy types in the game. However, it’s unfortunate that these enemies are often reskinned to compensate for their lack of variety. 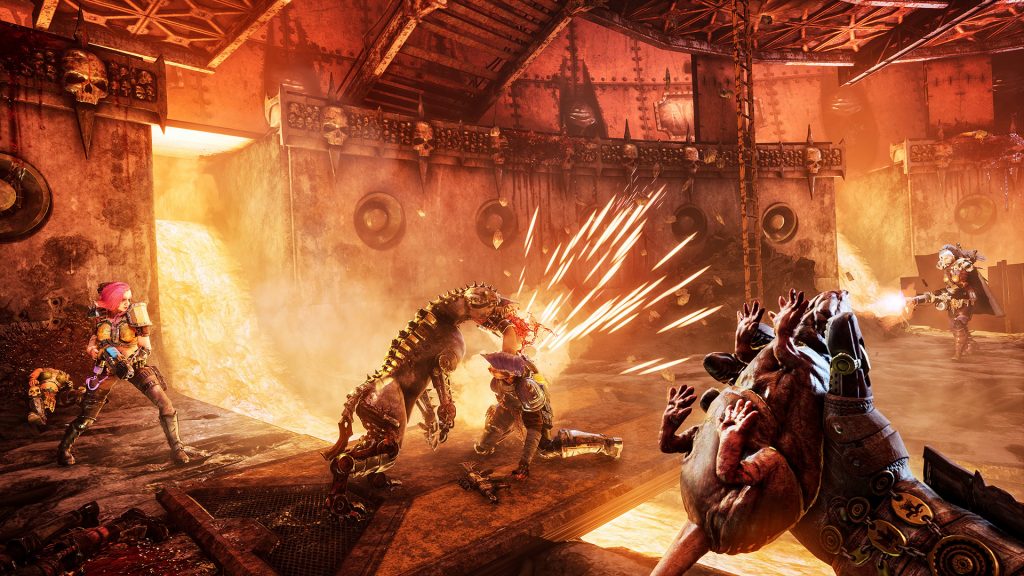 After spending some intimate time with Necromunda: Hired Gun, I can only describe the game as incredibly average. Its really flawed and fun parts cancel each other out in a near-perfect way leading to one of the most middling experiences I’ve had this year. However, if you’re a Doom loyalist and enjoy the FPS genre, there is some fun to be had with this mixed bag of a game regardless.