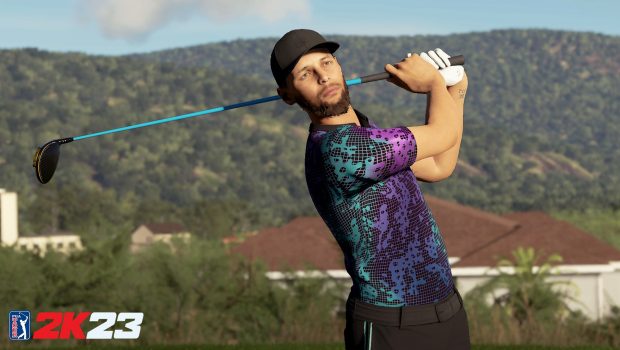 PGA TOUR® 2K23 cranks up the star power with the introduction of Stephen Curry as a playable golfer. The four-time NBA Champion, 2022 Finals MVP and eight-time All-Star, widely considered the greatest shooter in NBA history, has earned no shortage of accolades on the court. When he’s not sinking deep threes, he’s sinking putts on the golf course, is an avid golf fan, and a welcome addition to the PGA TOUR 2K23 roster. Stephen Curry will be available to all players as a free download at launch* and decked out in a distinctive Under Armour Curry Iso-Chill Golf adjustable cap, Charged Curry SL shoes, Curry Polar polo shirt and Curry Limitless shorts.

But Curry isn’t alone in stepping off the hardwood and onto the dance floor. Basketball legend Michael Jordan will also be playable at launch for players who pre-order PGA TOUR 2K23 Standard Edition or purchase the Deluxe Edition or Tiger Woods Edition. Jordan is included in the Michael Jordan Bonus Pack**. Players can tee up a head-to-head competition between the two basketball greats in Exhibition play locally or online*** to determine which hoops star is the greater links legend or take on an elite roster of PGA TOUR pros including Tiger Woods, Xander Schauffele, Tony Finau, Brooke Henderson, Lydia Ko, and more.

In case you missed it, check out the PGA TOUR 2K23 announcement trailer here.