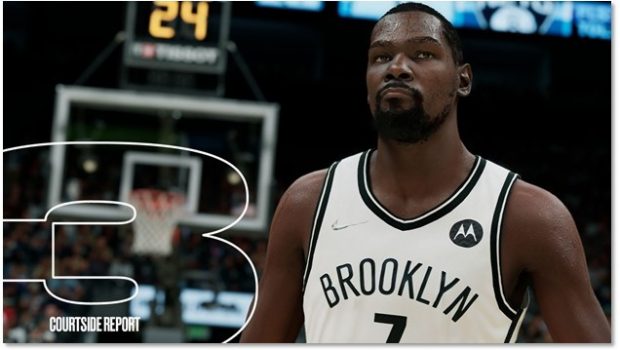 2K has revealed an in-depth look at Seasons for NBA® 2K22, which will be available across multiple game modes for the first time in the series. Players will be able to level up within the City*, Neighbourhood, and more to redeem rewards at no additional cost after reaching each new Seasons level. 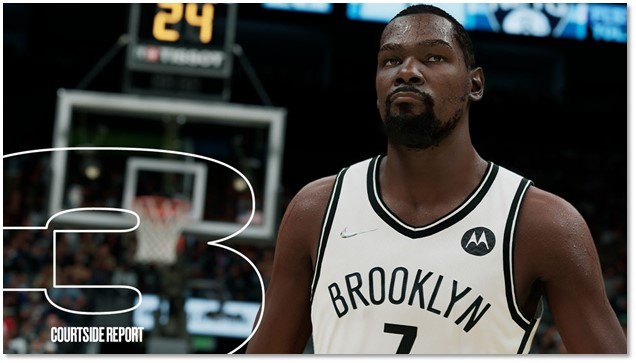 Additionally, NBA 2K22 Seasons now extends across MyCAREER, MyTEAM, and The W Online*, where players will be able to: 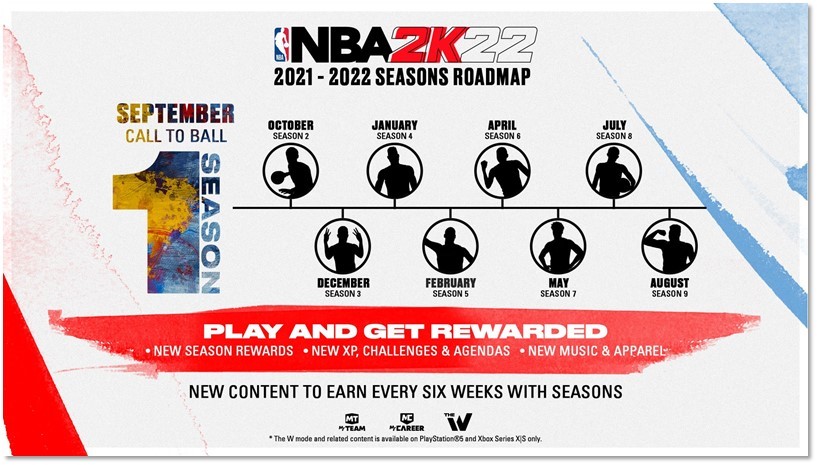 NBA 2K has transformed through the years and we’re thrilled to share the strides being made in NBA 2K22. Seasons will be a primary focus in NBA 2K22 and all the rewards will be free and redeemable.

In NBA 2K21 we introduced Seasons, an all-new way to level up and earn rewards within MyTEAM, and we’re expanding it even further in NBA 2K22. Seasons will play an important role throughout NBA 2K22, whether it’s MyCAREER, MyTEAM, or The W Online*, you’ll be able to access new content and earn rewards simply for playing with no additional cost.

Explore all there is to do in the City [PlayStation 5/Xbox Series X|S] and the Neighbourhood [PlayStation 4/Xbox One]. Leveling up will earn you more rewards, which are refreshed every six weeks at the start of a new Season. All year long, Seasons will offer fresh new content for you to enjoy.

NBA 2K22 is focused on giving you more ways to progress, more ways to compete, and more content. We can’t wait for you to experience all that NBA 2K22 has to offer, so without further ado, here are some features to watch for when NBA 2K22 launches. 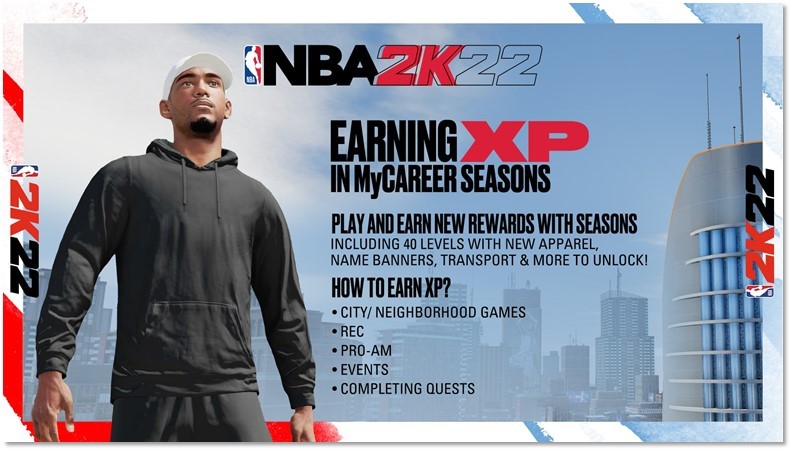 Last year, Seasons were exclusive to MyTEAM, but not anymore! In NBA 2K22, Seasons are coming to MyCAREER. Within the City [PlayStation 5/Xbox Series X|S] and the Neighbourhood [PlayStation 4/Xbox One], you’ll earn highly coveted rewards such as apparel, new Banners for your MyPLAYER, a new Grand Prize each season, and more. 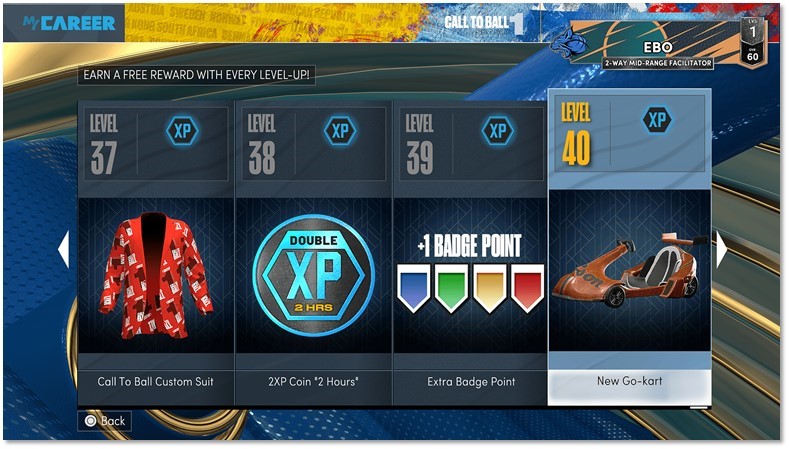 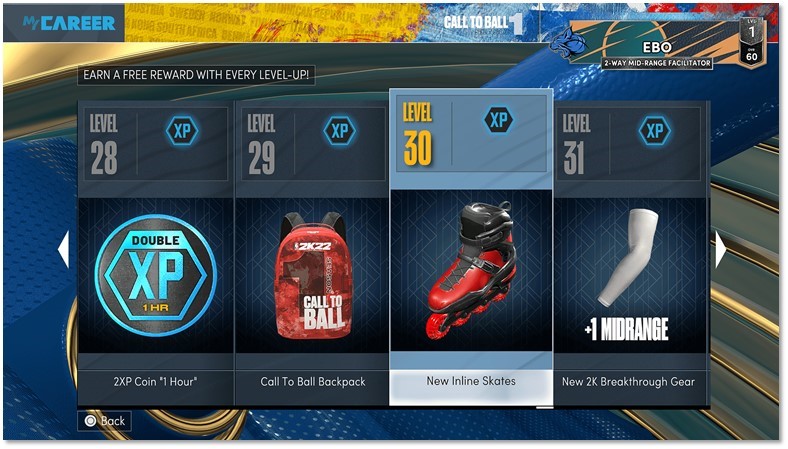 Start your engines, Season 1 is set to take players for a ride, unleashing Go-Karts in the City and Neighbourhood as the Grand Prize. We’re thrilled to introduce Go-Karts as a fun way to cruise and adventure through unexplored regions, and will be available once you’ve reached Level 40. In addition, Inline Skates can be used as a mode of transportation once you crack the Level 30 threshold. Both rewards are available to you once you’ve met the level requirements. Each Season, a new Grand Prize will be refreshed and become redeemable, it’s just a matter of whether you reach the finish line.

There will be plenty to explore and see within the Neighbourhood, but we want to broaden your horizons in more tropical destinations as well. For PlayStation 4 and Xbox One players, NBA 2K22 will set sail to the Caribbean in Season 1, where you’ll showcase your skills topside on a cruise ship, and on some of the world’s most picturesque island courts.

We’ve also been busy in the lab reimagining what it means to be a Legend, and we think you’re going to like what we’ve cooked up. The crown jewel for players in NBA 2K22 will be reaching Legend status, but Hall-of-Fame careers aren’t built overnight. Think about it, the G.O.A.T.s didn’t earn that title because of one season, they built on their success year after year, which makes it even more special. So, to become a Legend in NBA 2K22, you’ll need to reach Level 40 in four different Seasons. Now, that doesn’t mean you have to do it consecutively, but to become an all-time great, you must put in the work to earn bragging rights. 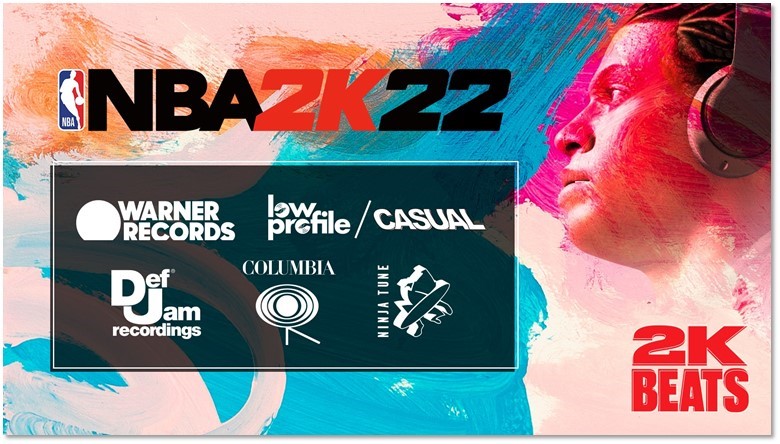 Another new aspect of Seasons is “First Fridays,” in which new songs will be added to the soundtrack on every Friday throughout the Season. In partnership with some of the largest music labels in the world, we’ll be featuring both up-and-coming artists and world-renowned musicians, joining the likes of Travis Scott, Doja Cat, Megan Thee Stallion, Young Thug, and more already on the NBA 2K22 soundtrack. New music will continue to be added to Club 2K [PlayStation 5/Xbox Series S|X] throughout the course of the year, for more information visit 2K Beats.

We understand that in order for you to play at a high level, you need to look good. All year, you’ll have the opportunity to freshen up your wardrobe with new and fresh apparel. Every Season we’ll be dropping apparel from the hottest brands to keep you looking clean on and off the court.

NBA 2K22 is bringing more content, events, and rewards to you than ever before, and this is just a taste of what’s to come.

In NBA 2K21, Seasons opened the door to a new and fresh way to experience MyTEAM. In NBA 2K22, experience the next evolution in MyTEAM Seasons! Get ready to earn XP with new and familiar Agendas, while also earning new rewards from Season & Lifetime Agenda Groups. Unlock the next level in your journey to Level 40 in every mode in MyTEAM: Domination, Triple Threat, Limited, Unlimited, Draft, and more! Every Season in MyTEAM brings new Challenges & Events, with an all-new fast-paced mode coming this holiday. To start building your dream team in the best way possible, climb to the top of Season 1 to earn Pink Diamond Carmelo ‘King of New York’ Anthony! 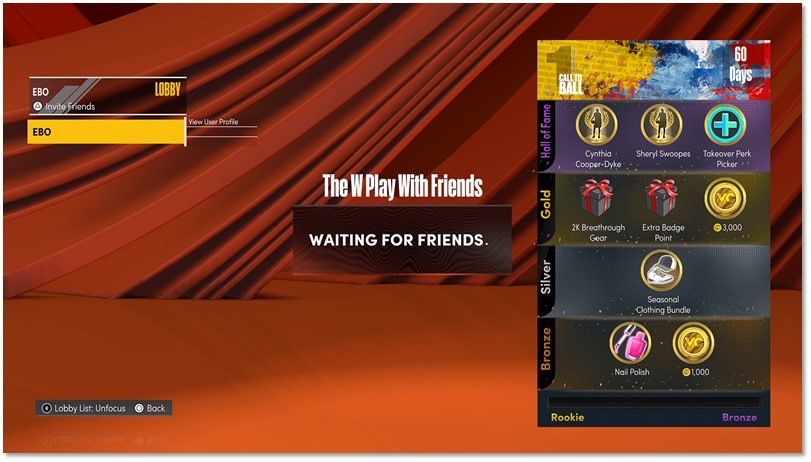 NBA 2K21 introduced The W on next-gen consoles, an all-new game mode featuring the WNBA and a MyPLAYER experience. Adding the The W to NBA 2K was a proud moment and we continued building on it NBA 2K22.* Go toe-to-toe with opposing MyPLAYERs online and earn new rewards, such as VC, clothing bundles, badges, nail polish, and more in NBA 2K22. Rewards will be updated and refreshed at the start of every new Season, so continue climbing tiers and collect them all.

Season 1 of NBA 2K22 will be filled with new ways to explore the City and the Neighbourhood, popular tracks and hits, fresh apparel drops, and more throughout the year. We can’t wait for you to level up using XP and earn rewards on your way to becoming a Legend. You can experience it all starting September 10.

* The W mode and related content is available on PlayStation®5 and Xbox Series X|S only.

NBA 2K22 will be released on September 10 for PlayStation 5 and PlayStation 4, Xbox Series X|S and Xbox One, Nintendo Switch, and PC platforms. For more information, please visit the NBA 2K22 official site.