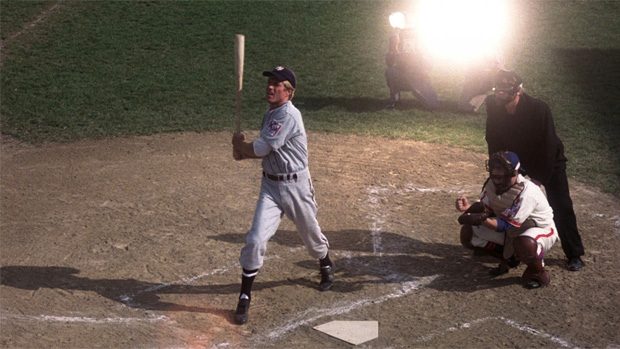 Summary: Robert Redford gets a second shot at glory in this classic baseball drama that evokes that lost glory of America's Game.

Baseball has long been regarded as America’s past time, the great summer game that has enraptured generations of watchers. The sleepy summer afternoon at the ballpark, the rumble of the crowd, barkers selling all sorts of food and drinks, the smell of hot dogs and burgers wafting across an infield filled with pyjama-clad men. The crack of ball on wood, the roar of the crowd, the burbling of the announcer. Grown men poring over box scores, while children trade and cheat each other out of baseball cards. The sounds and smell of summer with the slow build up over months before climaxing with the World Series. 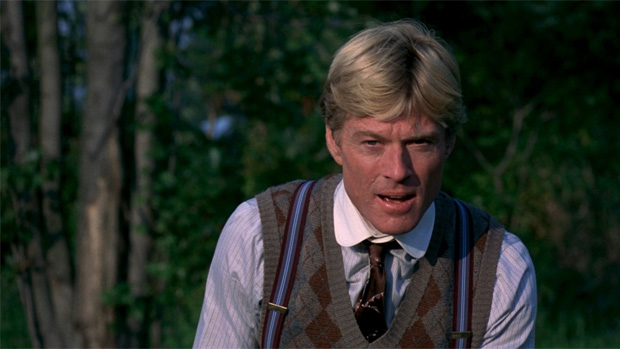 The Natural, adapted from the book of the same name, captures all these sights and sounds, marrying it, incongruously, to the Arthurian myth. The movie opens with vignettes of a young Roy Hobbs (Redford), living on the farm, learning the basics of the game with his father. After his father dies, Hobbs makes his own baseball bat out of the lightning struck remains of an oak tree, scoring the word ‘WONDERBOY’ into the bat. We then cut to an older Hobbs, on a train journey with his manager to seek fame and fortune in baseball. At a roadside stop, he strikes out the best known slugger in the game nicknamed The Whammer (Joe Don Baker) attracting the attention of sports writer Max Mercy (Robert Duvall) and and mysterieous Harriet Bird (Barbara Hershey). Later, in a hotel, the clearly insane Bird tries to kill Roy, shooting him in the stomach and ending his aspirations.

Almost two decades later, Hobbs (like Arthur before he was king) appears out of obscurity, gaining a contract with the New York Knights, a big league club. At first manager and co-owner Pop Fisher (Brimley) is resistant to his new middle aged charge, but eventually relents. Hobbs’s appearance and his ‘natural’ skills at bat, on the mound and in the field, turn around a losing season and drive the Knights towards winning the pennant. However, in the background, Max Mercy begins to dig into Roy’s history, and majority owner of the Knights, ‘the Judge’ (Robert Prosky), intent on stripping Pop of his remaining shareholding, works to undermine Hobbs. 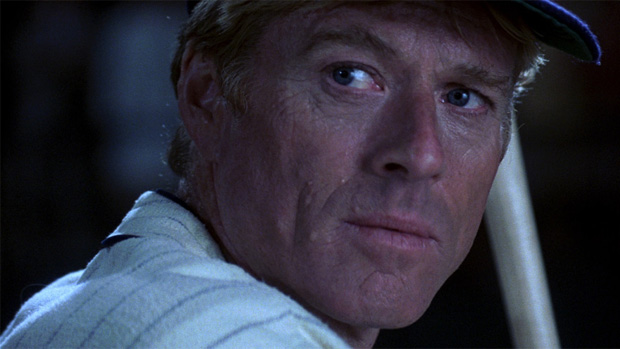 There are two heroes behind the camera. The first is cinematographer Caleb Deschanel, who beautifully evokes the era through use of light, especially natural light in the early scenes. Glenn Close in interviews has pointed to Deschanel for helping her achieve an Oscar nomination, and this can be seen just after halfway where her character, sitting in the crowd watching Hobbs, is the only person picked out in a halo of light. The blu ray transfer does justice to this breathtaking moment.

The other person to note is director Brian Levinson, who crafted a loving tribute to baseball from a book that contains considerable ambiguity about notions of fame. Levinson holds Hobbs up as a simple hero, a man intent on playing the game on its merits and not taking a bribe or dive from the Judge. Those who see only the commercial aspect of the game (the Judge) or seek to ferret out Roy’s secrets (Duvall) are depicted as corrupt and venal, motivated by money and or fame. The divide is stark – Hobbs, the farm boy, simple but direct, against the Judge, a corrupted city man who knows the price of everything and the value of nothing.

Redford displays the sort of easy-going charm that we’ve seen in movies like The Sting, Butch Cassidy and the Sundance Kid and Sneakers. His depiction of Hobbs as an American everyman, simple, upright and embodying the notions of fair play, is one of the great strengths of the movie. 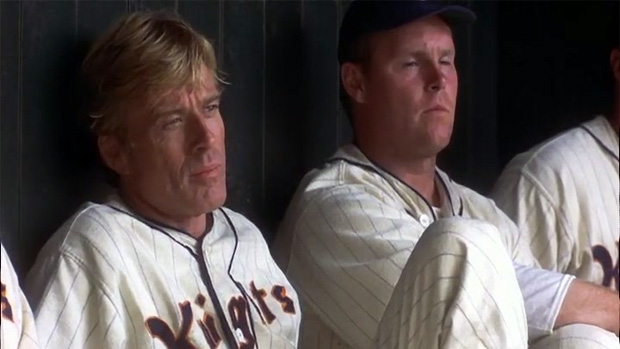 One of the great highlights of the movie is the character actors, particularly Richard Farnsworth (Misery) as ‘Red’ and Brimley as team manager and co-owner Pop Fischer. Like Brimley, Farnsworth had a long career in television and movies and it is that extensive experience which he brings to the screen. Brimley is the funny guy to Farnsworth’s straight man performance, and like his doomed portrayal in The Thing, gives his all to the role. Both men have an easy-going friendship, best exemplified as they sit in the dugout, playing a game of guess which tune I’m whistling, while Roy leads the team to yet another victory. It’s heart-warming and amusing. These two men were the sort of old school Hollywood character actors that are sorely missed today because the industry no longer values any male actor (Tom Cruise aside), older than fifty.

In a way, it’s hard to believe The Natural was released in 1984, an era of corporate greed and cynicism, not only in life but in movie making itself. In a sense, Redford’s Roy Hobbs’, like the movie, is a man out of time.

It’s worth noting, that while the movie ends triumphantly, the book on which it is based has an ending wide open to interpretation, some good, some bad. A bit like baseball, which over the last few decades has lost its position as the number one sport in America to gridiron. A player’s strike wiped out a season in the 1990s and later the black cloud of steroids in the game all conspired to bring baseball down. While it’s hopelessly naïve to expect players to simply play for the joy of competition, the eve- rising level of money flowing through sports has indeed had a corrosive impact on baseball. Perhaps all it needs is a few more Roy Hobbs to recapture the magic of yore.

Extras: a second disc of extras is chock full of material for the discerning viewer. We have a video introduction by Levinson, who talks about the re-edit of the cinematic release. There’s a look at assembling the team behind the scenes, and how the movie brought the game to the screen. Other extras look at the adaptation of the book into the movie, and the real life inspiration to the novel, the stalking of Eddie Waitkus. Plus there is an extra looking at comparisons between the Arthurian myth, and The Natural. 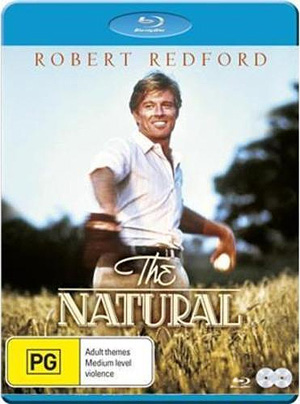