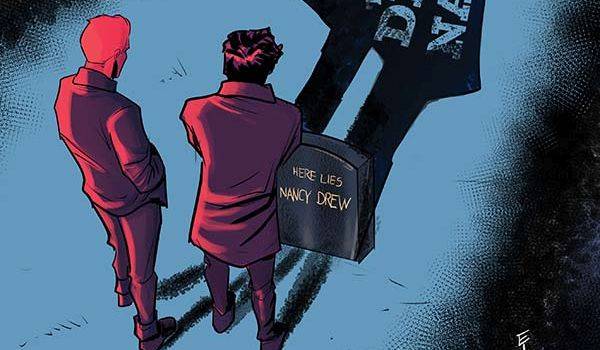 Nancy Drew is dead! Long live Nancy Drew! With the apparent death of local young investigator Nancy Drew after cracking a big case one of the Hardy boys is determined to uncover the truth even though his friends tell him to move on with her life. He gets some leads but things don’t seem to add up, did she really die or is something else going on?

That old gag! Killing off a major character and bringing back is an old trick of a publication if sales are flagging but not really done that often for non-superhero characters. There was some controversy from fans when it was announced  but I am sure the series will go on to be more interesting if you can get over the tired premise.

If you are a fan of the character and want to see how they manage to do a story about someone who is already dead. It has been done before but seems like an old trope these days.

There was a previous series involving a character that leads into this story but from what I am seeing here I am not that enthusiastic to go back and read it.

Nancy Drew the character is celebrating her 90th birthday and has had many different authors under the same pen name. I am sure they wanted to do something big for her anniversary but surely something else would have been better?

Another one where you might be better off checking it out before you decide if you are on board with it as you will end up having to buy all of the series to get the full story.