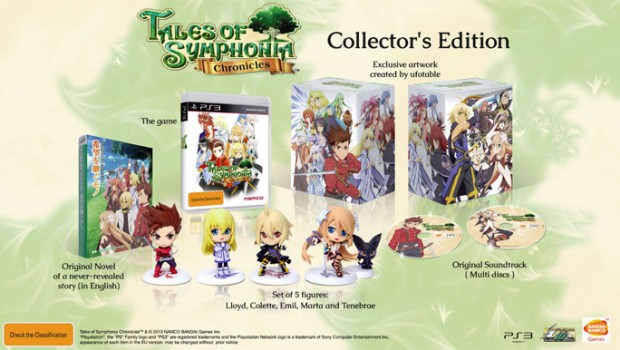 Sydney, Australia – October 23rd 2013 – Leading video game publisher and developer NAMCO BANDAI Games Europe S.A.S officially announced today that a collector’s edition of TALES OF SYMPHONIA CHRONICLES™ is available, exclusively for the PlayStation®3 computer entertainment system, while the game is scheduled for a release on February 28th 2014 in Australia and New Zealand.  Celebrate the 10th anniversary of the critically acclaimed classic, TALES OF SYMPHONIA™ and its follow-up story, TALES OF SYMPHONIA™: Dawn of the New World, together for the first time on a single disc containing the entire TALES OF SYMPHONIA storyline with updated HD graphics, the original Japanese voice overs and new content.

“In celebration of the Tales of Symphonia 10th Anniversary, we wanted to mark the occasion! Bringing back this epic and oneiric adventure was the first step to please fans and newcomers alike” said Mathieu Piau, EMEA Marketing Director for NAMCO BANDAI Games Europe. “The second step was to offer to all our beloved Tales Of fans the Collector’s Edition they deserve, with some fantastic collectible content to dive further into the Tales of universe!”

Follow Lloyd Irving as he embarks on a grand adventure with his friends to restore mana back to the world of Sylvarant, a source of energy necessary for the survival of their world.  Along the way they learn of the parallel world of Tethe’alla, whose survival rests on the same source of mana Sylvarant needs to sustain life.  How will Lloyd and his friends find a way to ensure the survival of both worlds?  TALES OF SYMPHONIA takes the signature real-time battle system of the TALES OF role-playing games, allowing for direct control of their character through fast-paced tactical battles.

TALES OF SYMPHONIA: Dawn of the New World continues the story from the previous installment by delving into the consequences set into motion by Lloyd and his friends at the end of TALES OF SYMPHONIA.  Take on the role of Emil Castagnier as he seeks to uncover the mysteries that have befallen his world.  Dawn of the New World advances the series’ battle system by introducing a new monster recruitment feature that lets players capture more than 200 unique monsters and train them to participate in battles.  Players have complete control over their roster of party members and monster allies, allowing for limitless combinations to take out to the battlefield.

Tales of Symphonia Chronicles™ will be available across Australia and New Zealand on February 28th 2014.

For more information on the Tales of series, please visit http://www.namcobandaigames.eu. More information about Tales of Symphonia Chronicles is available on www.talesofgame.com.