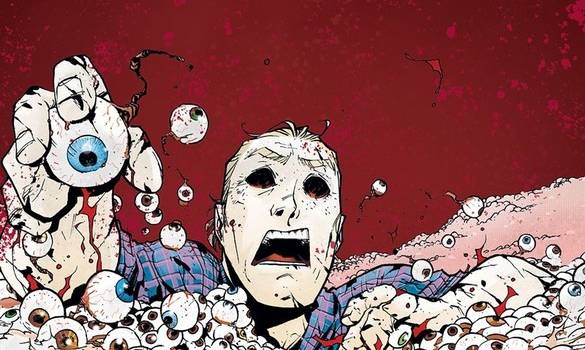 Summary: oshua Williamson and Mike Henderson hit the ground running and to be quite frank, it’s like they never stopped.

It's back! Wear gloves!

The Story: The sheriff goes missing as Alice and Finch dive back into the crazy world of Buckaroo, Oregon.

Summary: We open 30 years ago as a child has his eyes held open as they are burned by what seems to be bleach. His crime? Going into a forbidden room.

We then switch to the present day where a lady and 2 of her friends eat, drink, and talk about which horror movies they’ve seen. The conversation switches to favorite serial killers and who we assume to be Alice (it’s a nice fake out) is of course put off. Her friends give her a bit of grief and she concedes that her favorite of the Buckaroo butchers was the Crossbones Killer, who made statues and art out of the bones of his victims. One of the friends mentions the Clown Car Killer, who simply ran people over while dressed as a clown while the other mentions The Blonde. Alice mentions the Book Burner and how he’s the reason why her parents met. Then HE gets brought up.

The infamous Nailbiter which the series is named after. He liked to bite the nails clear off of his victims. After some of the girls mentions that they had a kid, Alice walks up and mentions that SHE is the Nailbiter’s daughter. Alice walks back to her friends at the bar and a patron asks her if she was serious and upon finding out she was, spits straight in her face. Screaming that the Nailbiter killed her uncle, Alice and her friends make a quick exit.

Alice leaves her friends and goes home. She enters and looks for her mother in the bathroom, but instead just finds a massive amount of blood. Holy crap! It’s the same scene that we ended the first series with!

There’s more, but in this instance, I’m not going to spoil it for you. Because this book is that good.

I haven’t been this excited about a debuting book in I don’t know how long. I cannot stress how good the first series of this story was and like any good horror movie, a sequel has arisen.

Our characters this time around at least for now are Nicholas Finch and Alice. Setting up Alice as the final girl again (at least for now) is great because we have an instant rapport with her. I’m sure we’ll get a new cast to go along with the regulars. Finch is an interesting case, because it seems his anger has been tamed since we last saw him. I doubt that is going to last though because every series needs a hot head. It will be interesting to see where he goes from here, because this time he’s got a family to think about.

Joshua Williamson and Mike Henderson hit the ground running and to be quite frank, it’s like they never stopped. The art is great with a horror vibe that exudes from the page. As alsoways the colors are bright and the inks are well defined.

I hope the industry picks back up soon because I cannot wait for issue 2!