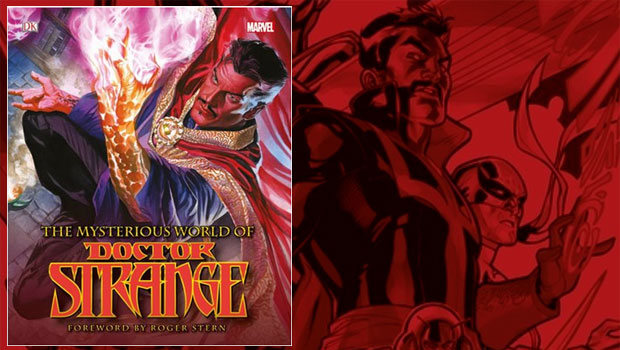 Summary: The Mysterious World of Doctor Strange is the true real-world ‘All-seeing Eye of Agamotto’ and is your one-step tome of all things Sorcerer Supreme!

Given the popularity of Disney’s amazing new superhero film, Doctor Strange, this book from DK makes the perfect compendium to know everything there is about Earth’s Sorcerer Supreme from his diverse comic book career which started in Strange Tales #110 all the way back in July 1963. Best of all, The Mysterious World of Doctor Strange really gives you a unique insight into this fictional magician from his appearances in the Marvel Comics Universe such as his origin, his changing costumes, allies, villains and even some of his latest storylines from Secret Wars II and beyond which saw a new universe created. Needless to say, Doctor Strange’s alter ego Stephen Strange has had it rough. 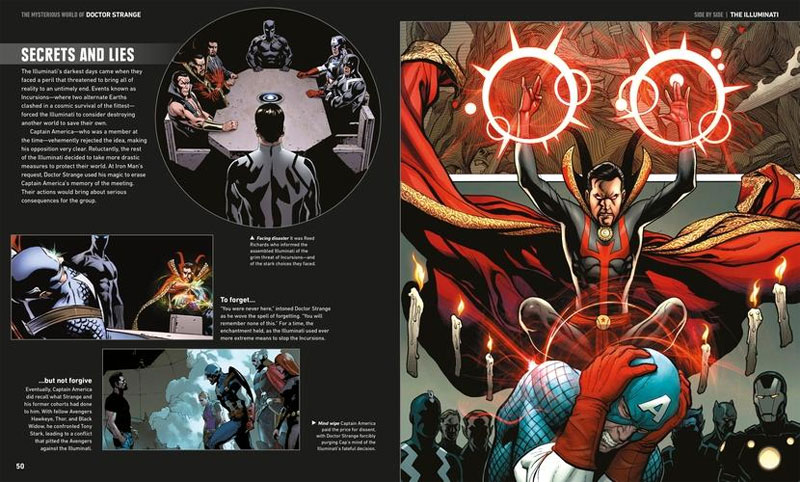 The presentation of this book is superb! From the classic picture of Doctor Strange on the cover to the high quality paper and images that are truly popping with colour, it’s a brilliant release from DK. In terms of contents, this book is split into seven chapters with the following themes that include;

… there’s also a foreword plus a glossary and index. Although the text is relatively short, it does give the right amount of detail without it being overtly verbose as it explains characters, their motivations and key storylines into the history of Stephen Strange. Even some of the more controversial stories are discussed in this book which really give this book some great merit in terms of content. 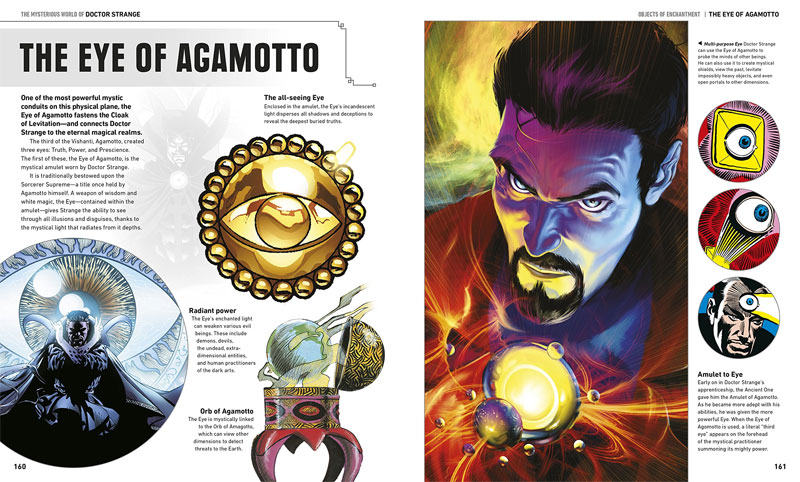 The foreword of this book is written by legendary comic scribe Roger Stern who has worked on some of the world’s most famous comicbook characters and he discusses how certain writers like Roy Thomas directed Doctor Strange and of course influenced his own time with the Sorcerer Supreme. So even if you have never read a Marvel comic featuring Doctor Strange, this book is the best place to start because of the amount of detail and imagery used to help draw you into the mythical world of this magical superhero. 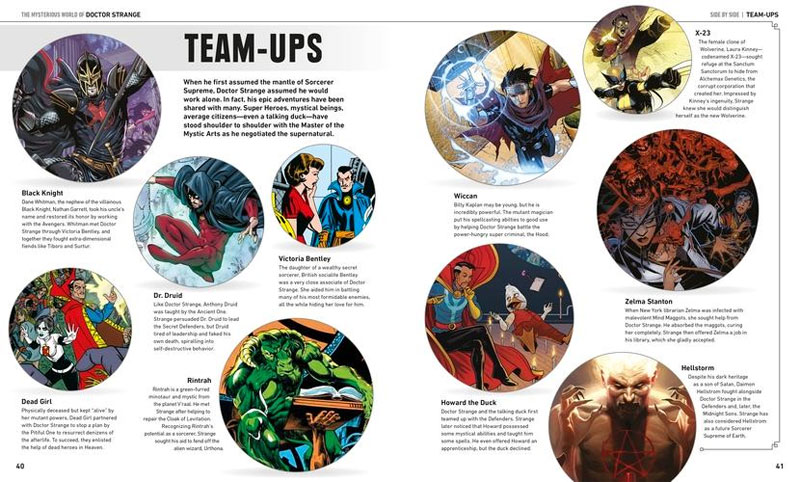 Even though I consider myself a comic fan, I learned so much from this book by Billy Wrecks, Nick Jones & Danny Graydon such as Doctor Strange’s wife Clea who comes from the Dark Dimension, she also had her own magic girl-squad or the powerful human sorcerer Sisi-Neg who transcended to godhood and even that our good doctor met Howard the Duck. From reading this book, I can also see how faithful the movie creators were to this fictional characters history which is another reason why Marvel movies are outperforming their rivals at DC Comics with Warner Bros. Furthermore this book touches upon the allies of Doctor Strange such as Spider-man who actually come from the same city of our good doctor to the powerful Avengers, including some very powerful otherworldly foes. 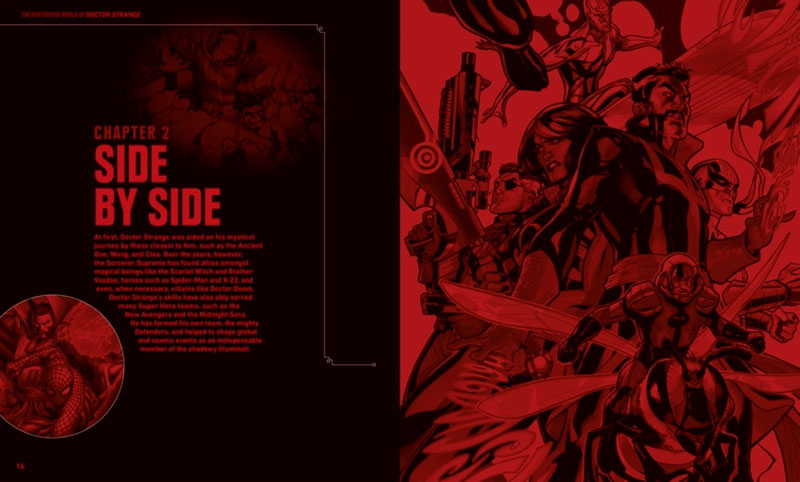 I also discovered that Doctor Strange is quite an integral part of the Marvel Comics Universe and not just a fringe character like DC’s Doctor Fate or Zatanna. Rather, Doctor Strange is part of the mainstream stable of characters and when you’ve come under the attention of Thanos, you’re a big player. For example, the Shuma-Gorath profile in this book had Thanos ordering Ebony Maw, a powerful alien sorcerer to manipulate Doctor Strange in order to summon the powerful Shuma-Gorath into the streets of New York as this ancient creature went ballistic. 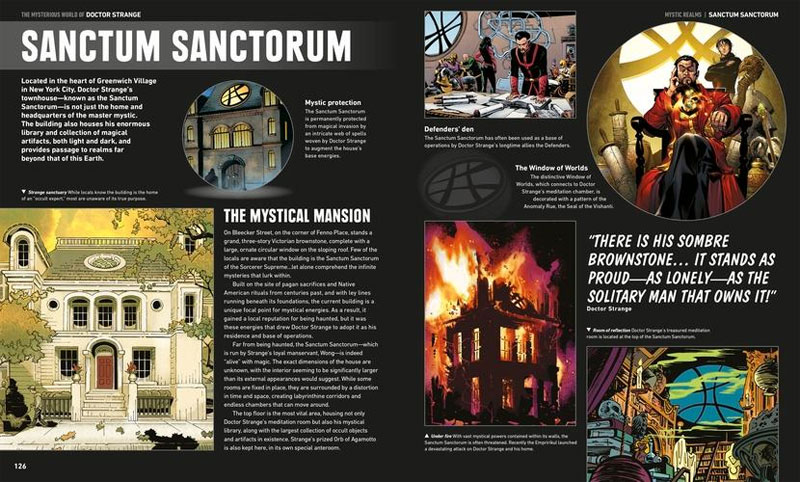 Another highlight is seeing all the colourful enemies Doctor Strange has to contend with, including threats from other universes such as the Great Society who were sacrificed to save his universe. Reading about the mystic realms also explores not just the multiverse but other realities which make you appreciate the diversity of Marvel Comics. 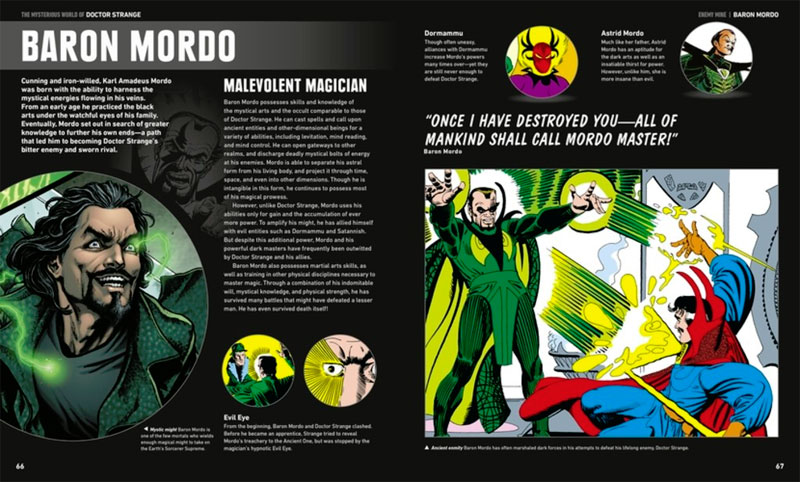 My only gripe with this book and it’s quite small is that it doesn’t mention any comic numbers in the information provided which would have let the reader go off and read a particular comic if they wanted to know more. Sure, the comic world is not static but it would allow for additional information, however it may also scare new reader as well. Given that, the second most impressive aspect about The Mysterious World of Doctor Strange which makes up for the lack of comic references is the beautiful artwork and whether it’s Silver Age or Modern Age art, it just looks spectacular and really draws you into this book. 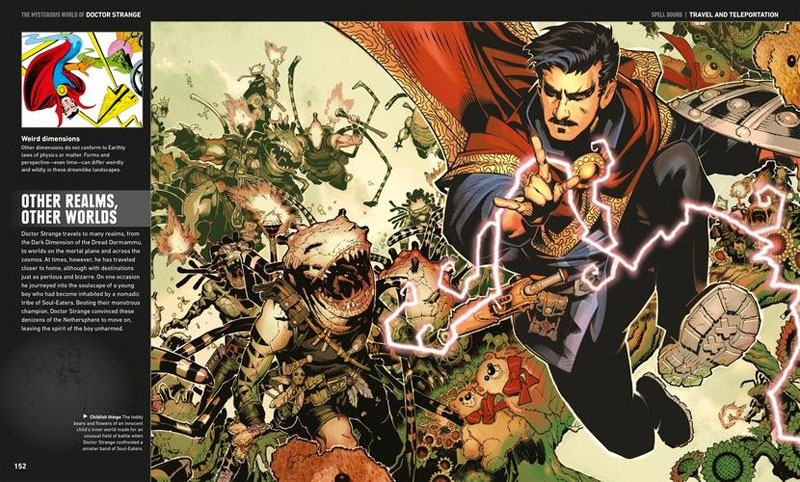 The Mysterious World of Doctor Strange is the true real-world ‘All-seeing Eye of Agamotto’ and is your one-step tome of all things Sorcerer Supreme! 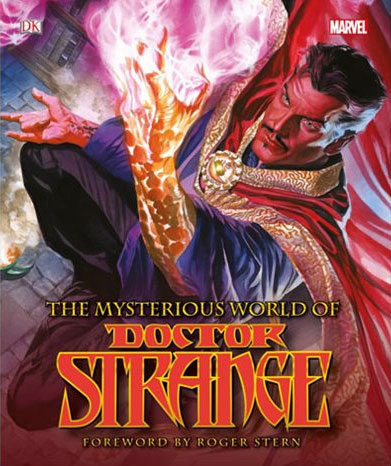