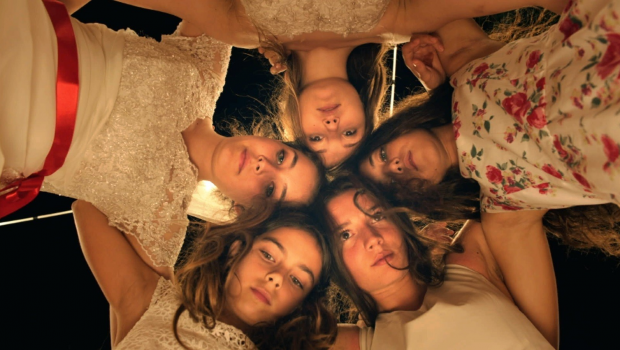 In 1983, pop singer Cyndi Lauper was determined to make her own contribution to feminism and female empowerment through the idiosyncrasies of her music. By reinterpreting Robert Hazard’s song “Girls Just Wanna Have Fun” and reinvigorating the lyrics through a female perspective she was able to express her own personal and musical imprint. “I come home in the morning light. My mother says when you gonna live your life right. Oh mother dear we’re not the fortunate ones. And girls they want to have fun.” These lyrics are critical of the way parentage devolves into bullying by hampering the freewill of children, particularly girls because of the one-sided social expectations imposed upon them in the name of being proper. Mustang, an impressive new Turkish-French film, appropriates Lauper’s pop song and becomes a meaningful addition to a contemporary film subgenre examining female imprisonment. Mustang is comparable to recent films about gender oppression, such as Room and 10 Cloverfield Lane. But it has more joy and humour than those two films and forges its own visual identity through the stylistic choices of its director Deniz Game Erguven. Mustang is her debut feature, following two short films and her graduation from the French film school La Femis. Filmed for only $1.3m dollars, the film is politically charged, drawing from pop and literary inspirations to address religious fundamentalism and the repression it inflicts on gender politics and duty of care.

Erguven and her co-writer, Alice Winocour, have shaped the film’s political goals into the framework of a classic fairytale. Mustang focuses on five sisters of varying ages, who are played by newcomers Tugba Sunguroglu, Doga Zeynep Doguslu, Elit Iscan, Ilayda Akdogan, and Gunes Sensoy, all of whom are naturalistic and believable. The sisters are orphaned and now live in Turkey with their traditional grandmother (Nihal G. Koldas), who is essentially the archetype of a wicked stepmother. Her own son (Aybert Pekcan), who is grieving over the family deaths, is even more intimidating and conservative than she is about disciplining and controlling the girls’ behaviour. After a handsome opening sequence on a beach, the girls are punished by their guardians who believe they’ve embarrassed the family by playing with the boys from their school. This doesn’t stop the girls from escaping the tedium and containment of their home. They sneak out by themselves to a womens-only crowd at a soccer game, but are spotted on television. This prompts their guardians to devise a new plan. They entrap the girls by increasing the house’s security, barring the windows and having iron gates installed to prevent them from leaving. They’re not permitted to attend school and they’re forced to all wear the same ugly home-made brown garments. Worst still, when they’re briefly allowed outside it’s so they can be shopped around for arranged marriages. “The house became a wife factory, which wasn’t good”, says one of the girls narrating the film. While seeing her sisters disappear into marriage, this same girl befriends a truck driver (a prince or rescue figure), who gives her a driving lesson and also the hope that she can escape and find her favourite school teacher who has moved to another city. 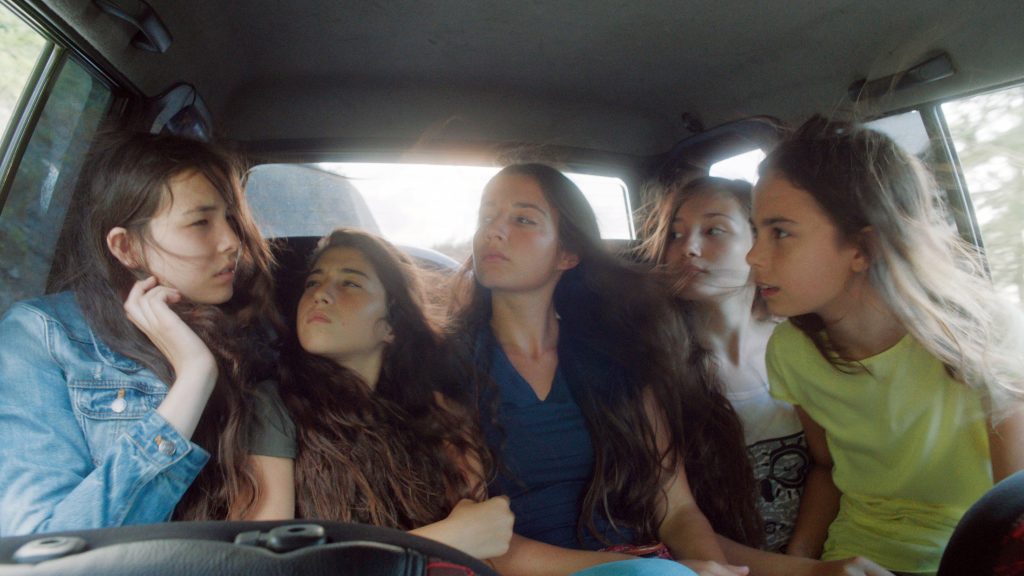 Mustang is a successful hybrid of a fairytale and the devastating observations and realism of a social drama. The strongest contributor to the film’s naturalism is the fluidity of the camerawork and the director’s resistance to over script sequences. Many scenes are filmed with dizzying handheld cameras that sprint after the girls, following them into their rooms and down the hallways of their house. The choice of handheld cameras is a stylistic and thematic necessity. The motion and energy of the camera provides the young actors with the time and space to play together and move around the rooms of the house with such believability that it gleefully raises up both fingers to over-rehearsed sequences. The camera also reflects a pivotal emotion of the characters, stressing their internal desires not to be constrained or repressed by those forgetting these girls are free, not slaves. Erguven also proves her sense of control by expressing an emotion through direct and clear images and ensuring the position of the camera and the selection of the frame compliment each other. Each sequence follows the same visual and dramatic pattern, where joy is contrasted with punishment and angst. The camera and the frame alternate between wide shots and close-ups, showing the freedom and fun the girls are having and then the repressive consequences at the hands of their guardians. The opening shots on a beach are photographed with a wide lens, and as the girls play with their friends the camera crabs sideways to highlight the lack of boundaries in the outside world. Inside their house, they’re forced into traditional domestic activities, such as cooking, and the camera tightens to show their repression. The cinematic clarity extends to the strong performances of the young actors. Erguven directs their body language rather than their dialogue, making their faces deeply expressive. One of the girls stands at a window with her hand on the glass, preparing to clean it, and her gaze becomes an image of desire. In a great two-shot at a wedding, the gloomy expressions of both the bride and groom evokes a generation imprisoned by meaningless traditions. While a highly realistic film because of its naturalistic actors, it’s equally stylised by providing space for the actors through formal decisions that amplify their emotions. 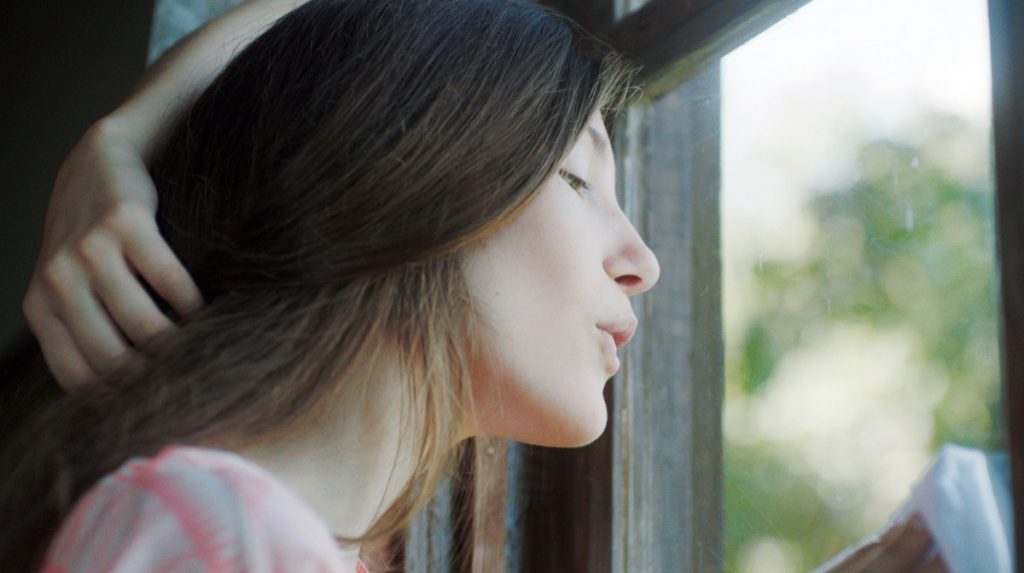 The film is largely mesmerising because of its visual flair and because it is a dramatically troubling story. There’s quiet humour to counter the bleakness, but the repressiveness of the religious traditions makes it disturbing viewing. In one confronting scene, a boy is married off to one of the girls and is bullied by his family who wait outside his bedroom to see the couple’s bedsheets. Almost entirely off camera, sexual abuse at the hands of the girls’ uncle is implied, forging another dangerous story angle. Mustang’s deliberate looseness only falters when it is difficult to distinguish a character in a critically tragic scene. But the appearance of a side character ensures it eventually makes sense. The film’s ending is more problematic, pushing the film back towards to the simplicity of a fairytale, which is the one time when the two narratives types don’t gel. Injecting the character of the truck driver into the finale doesn’t fit as cleanly into the story as one would hope and this bothered me. But I still cared about the girls escaping from their relatives. I also understood why their relatives where anarchic gaolers, because they were driven by God and their grief. And finally, I relished the scenes of joy between the girls. This film extends beyond Lauper’s pop war cry. For the girls in this film, fun is never devoid of meaning. It means living in each others company, having the freedom to express their desires, and most importantly, being treated like real people.

Summary: While a highly realistic film because of its naturalistic actors, it's equally stylised by providing space for the actors through formal decisions that amplify their emotions.