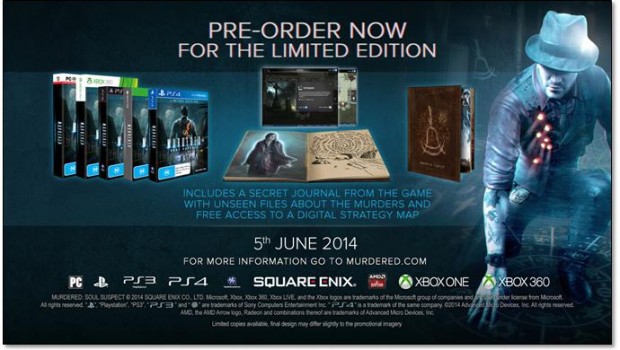 Sydney (25th March 2014) – As Ronan digs deeper into the investigation of his own murder, both he and Joy realize Salem has been hiding a secret far darker than they ever anticipated. Watch the trailer at http://youtu.be/w71aaRbbn1g to find out what lies buried in Salem and see the newly announced Limited Edition version of Murdered: Soul Suspect.

The Limited Edition* will include a copy of the journal used by Ronan and Joy to hunt down the killer and features written and visual clues about the murders terrorising Salem. It will also include free access to an Interactive Digital Strategy Map. With the aid of the map, you will be able to seek out hundreds of collectibles, detect side quests and find all of Salem’s haunting landmarks. The map will be accessible via computer or tablet.

Murdered: Soul Suspect™ challenges gamers to solve the hardest case of all… their own murder. Ronan O’Connor, a detective with the Salem police, has his life brought to a brutal end by a masked killer. Caught in the purgatorial world of Dusk he must combine his investigative skills with powerful supernatural abilities to uncover the shocking link between his own death and a series of killings terrifying the town of Salem.