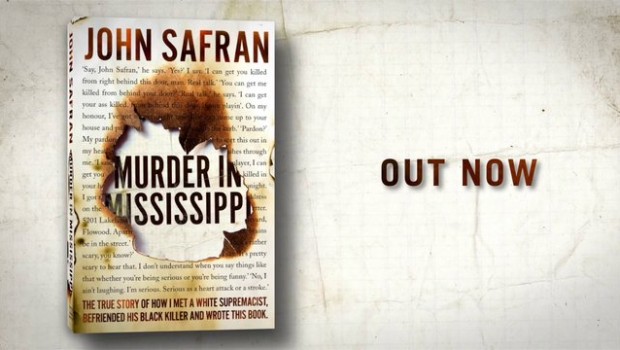 Summary: Highly recommended for fans not only of the professional prankster’s previous outings, but for those who like their non-fiction grittily immersive and frankly unputdownable.

It was whilst filming the latter that Safran met eccentric Mississippian lawyer Richard Barrett, an avowed white supremacist and leader of the ‘skinheadz’ Nationalist Movement.  Though the intended segment never aired for legal reasons, Safran was taken aback to learn barely a year later of Barrett’s violent death at the hands of a young black man, Vincent McGee.  When it emerged that Barrett and McGee may have had a paid sexual relationship and that the murder may have been due to McGee spurning the aggressive advances of his racist lover, Safran knew he had a story on his hands.  Heading back to the Deep South he interviews the main players in the story, including McGee himself, as well as members of the defence and prosecution and a murky succession of locals, family members, friends and acquaintances.

The end result is a raw yet eminently readable examination of Southern racial politics and a stinging denunciation of the local judicial system at work: at one point, convinced for various reasons to drop the sexual aspect of his story, McGee pleads guilty to manslaughter and is summarily given 65 years.  Safran’s brisk, cursory language in this chapter perfectly mirrors the perfunctory manner in which a 23-year-old man is sentenced to more than six decades behind bars, and his shock is augmented by the confession of one attorney that had the full facts of the case come to light a sympathetic jury might conceivably have found grounds for a dismissal.

Safran is a self-conscious and occasionally unpredictable stylist – the book is prefaced by an odd email exchange between the author and a friend in which Safran expresses his doubts as to his own literary abilities, seemingly as a way of excusing any flaws in the work which follows – yet the earnest and eminently likable persona so prevalent in his filmic works is once more evident herein, and the book is all the better for it.  The story itself falls firmly into the category of ‘stranger than fiction’ true crime books, and as a first full-length outing it is addictive, fascinating and hugely ambitious.  Highly recommended for fans not only of the professional prankster’s previous outings, but for those who like their non-fiction grittily immersive and frankly unputdownable.