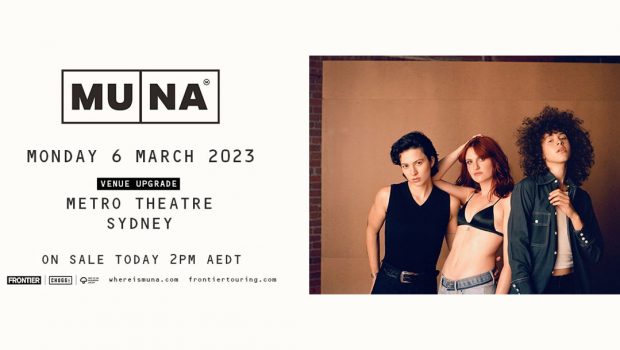 The band’s first ever Australian headline show has been one of the hottest tickets in town, completely selling out within moments earlier today. With a reputation for impeccable performances and stellar on-stage energy and production it’s no surprise, MUNA’s live show described as “effortlessly captivating and endlessly impressive” (Varsity UK).

MUNA’s one-off Metro Theatre show will take place the day after they make their anticipated debut as headliners at Sydney WorldPride on Sunday 5 March. They will then hit the road with Lorde, appearing as special guests on the star’s Brisbane, Melbourne and Sydney Solar Power shows as well as at Adelaide Festival throughout March.

MUNA have built their incredible fanbase touring with the likes of Harry Styles, Kacey Musgraves and The 1975, and performing live on US TV shows The Tonight Show with Jimmy Fallon, Jimmy Kimmel Live!, The Ellen Show and more. Later this year, the trio will open multiple shows on the US leg of Taylor Swift’s upcoming tour in addition to headlining their own US tour and performing at several festivals including Coachella, Bonnaroo and Reading/ Leeds.

MUNA’s self-titled third studio album is a landmark, released last year through Phoebe Bridger’s Saddest Factory record label. Spin called it a “… brilliant new album drips with sex, freedom and synth-pop bliss”, while The Guardian hailed it as “pulsating with a newfound freedom… a euphoric third album of stomping pop, country and ambient pulses from one of pop’s best bands”.