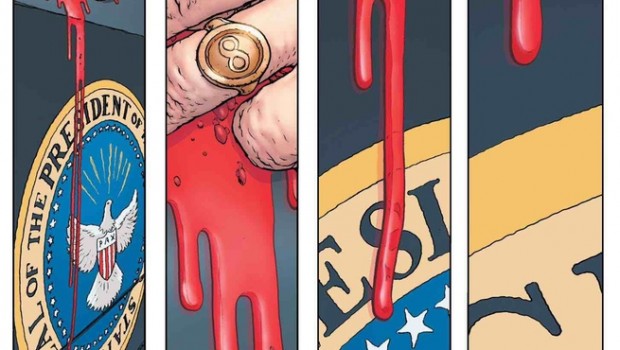 After the last issue of The Multiversity I was left disappointed. Not because it was a bad comic it was actually enjoyable, it just lacked some of the intrigue and fun of previous issues and the fact that the superheroes of Earth-Me as self important socialite party figures and spoiled brats wore a bit thin and I began to lose a bit of patience with that particular issues. Therefore, after some trepidation I finally  read Pax Americana and I can confirm that this is easily the best issue of The Multiversity bar none. I’d even be as bold as to say this comic is easily in the running for comic of the year.

It also helps that this issue sees Grant Morrison reunited with Frank Quitely and this team continues to be a match made in Heaven. Readers will also notice both doffing their hats to Alan Moore and Dave Gibbon’s Watchmen with a variety of tributes featured in both the writing, the artwork and the characters. The characters are familiar given this story features the Charlton characters that inspired the characters in Watchmen. Like the similarities between Blue Beetle and Nite Owl, Captain Atom and Doctor Manhattan, or Rorshach and Steve Ditko’s creation The Question both adhering to Ayn Rand’s philosophy of objectivism and the view that there is only black and white and nothing in between. Hell there’s even a reference to Steve Ditko’s Mr A, bonus points if you can spot it. 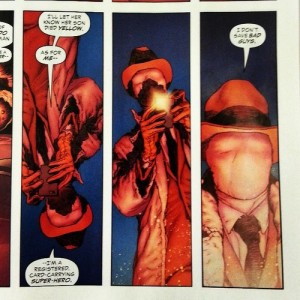 Whilst some readers maybe put off by the density of the text and the amount of panels being fitted into single pages that should not put you off as Pax Americana can be read over and over again to find new clues about this story and the overall linking in with The Multiversity series so far with the cursed comic making another appearance with few clues being handed to the reader as Morrison likes to make you work towards the answers instead of ramming them down your throat with a spoon. There also comes an amazing moment in which cyclical nature to the story appears in certain themes appearing and clues such as Algorithm 8.

Whilst not a lot of progress maybe made in the grand scheme of The Multiversity series as a whole there is a lot to enjoy and take in with Pax Americana including the art and small details that enhance the overall enjoyment of the issue which I recommend rereading to fully figure out the pieces of the puzzle, and knowing Grant Morrison’s work will be requisite in the grand scheme of things as the series progresses. Pax Americana is not only a great self contained story that addressed how the story of comics can be approached in a particular sequence that involves a dog being disemboweled by Captain Atom, but a great issue in one of the most interesting events to happen in comics this year.

Read it and enjoy it, then reread it and find those clues and bits of detail that you may have missed the first time and savour the partnership of a great writer and artist in the medium on top form.