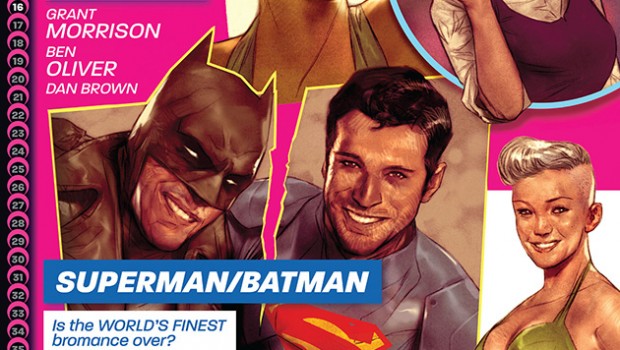 Grant Morrison’s The Multiversity continues with issue #3 The Just issue #1. Confused? For those not yet familiar with this particular series The Multiversity is a series by Grant Morrison that explores the different multiverses of the DC Universe in one shot style stories that are interlinked through a haunted/curse comic book. Also each issue Morrison works with a different artist, in this case Morrison is working with Ben Oliver.

This time we find ourselves in a universe where world wide peace is the norm, being a superhero is about as exciting as listening to a university lecture talk about their favourite carpet samples. As Batman, Damien Wayne in this universe, states it is boring. The superheroes of this universe instead seem to be a cross between the vapid and vacuous lives of celebrities and rich kids mixed with the DC Universe. Think MTV’s My Sweet 16 or Keeping Up With The Kardashians with superheroes. Some of the superheroes even resemble certain celebrity figures, Arrowette even has the hipster girl hair style that resembles Miley Cyrus, and Superboy is a pretentious navel gazing artist type who chain smokes. Some of this is genuinely amusing and Oliver’s near photo realistic art style is beautiful to look at and suits this particular section of The Multiverse perfectly as part of the art work looks like it could actually be a still from one of the shows I’ve previously mentioned but featuring DC characters.

While this issue is still a fun exploration of The Multiverse it is by far the least interesting issue of the series so far and the least entertaining. Yet Morrison not at his best is still better than some writers at their best. After a while the boredom of the characters begins to transfer to the reader as we begin to feel as bored as they do as the joke of well established heroes as teen idols does get a bit style by the final stretch of the story and that is when the action begins to kick and yet some of the super heroes are more concerned with parting and scheming against each other the way a teen would in a melodramatic show like 90201. Although this issue may not be as exciting as the previous there is still some buildup to the next issue which sees Morrison team up with Frank Quitely, and we all know how brilliant that team up has been in the past with WE3 and All Star Superman that should get any comic fan salivating.