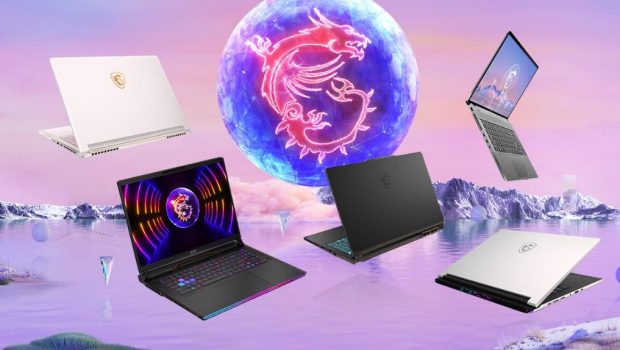 MSI, a world-leading laptop brand, has proudly unveiled its all-new laptop lineups equipped with the latest NVIDIA GeForce RTX 40 series GPUs and up to 13th Gen Intel® Core™ HX series processors. With the leap of performance boosting and the awarded recognition at CES, MSI is pushing the peak of performance and innovation with the whole new laptop lineup.

The latest MSI laptops are powered by the ultra-efficient NVIDIA Ada Lovelace architecture, bringing a quantum leap in performance with AI-powered DLSS 3 and enabling lifelike virtual worlds with full ray tracing. With the exceptional power improvement, eight of the newly MSI laptops are NVIDIA Studio validated, not only in the Content Creation series but also in the Gaming and Business and Productivity series.

Backed by NVIDIA Studio technologies for creators, products with NVIDIA RTX™ GPUs benefit from RTX optimizations in over 110 creative apps, NVIDIA Studio Drivers for the highest levels of stability and performance in creative apps, and exclusive AI-powered NVIDIA tools: Canvas, Broadcast, and RTX Remix. MSI Stealth, Creator Z and Prestige series laptops come pre-installed with NVIDIA Broadcast, transforming any room into a home studio through the power of AI.

The new MSI laptops also feature the brand-new Intel 13th gen processors with an overall performance increase up to 45% benefiting from the increased core count and turbo frequency.

All new Gaming Series: Powerful than Ever

The new MSI gaming laptop comes with the latest exclusive thermal design, which helps to make the gaming series more powerful than ever. All the heat pipes have been redesigned to shared pipes, dedicated pipes, and VRAM-exclusive pipes, to assure the performance will be fully delivered. In response to the performance enhancement, MSI’s GeForce RTX 40 Series laptops, from the high-end Titan series to the entry gaming Katana series, incorporate the MUX design to allow activation of Discrete Graphics Mode through MSI Center, further unleashing more GPU power.

The award-winning Titan GT and Raider GE come with the top-notch i9-13980HX processor and up to GeForce RTX 4090 Laptop GPU together with the exclusive MSI OverBoost Ultra technology, pushing the processors and graphics to 250W total full power or support 5.2GHz frequency across 8 P-cores depending on workload.

To present these incredible performances, Titan GT and Raider GE come with a world-class display. Titan GT is equipped with the world’s first 4K/144Hz Mini LED display, featuring over 1000 nits of peak brightness with over 1000 local-dimming zones, while Raider GE is geared with the 16:10 QHD+ 240Hz display. These world-class displays clearly present those frames driven by powerful hardware.

The Raider GE series comes with a new chassis with an upgraded matrix light bar which is fancier and more futuristic. As well as Vector GP series, with the low profile and minimalism new design but also impressive performance to become the best choice for STEM and engineering users.

Stealth Series: Sleek and Sharp in Every Range

The slim and powerful award-winning Stealth series is now coming with a full-size range from 14, 15, 16, to 17-inch. Introducing the newly designed Stealth 14 Studio and Stealth 16 Studio. Both of them are favored by the magnesium-aluminum alloy body to deliver a thin and lightweight chassis. While Stealth 14 Studio features the MSI Vapor Chamber thermal design, making it the most powerful 14-inch gaming laptop. Moreover, the Stealth 16 Studio comes with a trilateral Dynaudio 6-speaker sound system providing the most immersive entertainment experience. Furthermore, to deliver mighty performance, the Stealth 17/16/14 studio are NVIDIA Studio validated laptops, which fulfill different needs across gaming and content creation.

To deliver the most immersive and stunning experience, Stealth 15 brings a revolutionary high refresh rate OLED display, with 240Hz and less than 0.2 ms response time. It also supports a 100% DCI-P3 color gamut, allowing users to experience the next level of gaming.

With the NVIDIA Max-Q suite of technologies that optimizes system performance, power, battery life, and acoustics for peak efficiency. The Stealth series is not just blazing-fast performance, but also thin and quiet.

Introducing the whole-new series of entry gaming laptops, Cyborg 15. It comes with a futuristic translucent chassis design, which you can see the mechanical & electrical parts through it. With its thin and light body and cyberpunk-inspired design, Cyborg 15 is a perfect choice for those bored with the ordinary entry gaming design.

MSI has also refreshed the hot-selling gaming series Katana, Sword and Pulse to the latest graphics and processors for better gaming performance. Moreover, Pulse, Katana and Sword are now available with MUX switch. Gamers can easily switch between hybrid graphics mode or discrete graphic mode via the built-in MSI Center.

The CNC-crafted beautiful chassis is not just the only spotlight in the content creation series, the performance of Creator Z series is now on another level. The latest Creator Z17 HX Studio/ Creator Z16 HX Studio comes with the top 13th gen Intel HX series processors and has also been certified by NVIDIAStudio. With the Vapor Chamber Cooler thermal design, the Creator Z series become the most powerful creator laptops in the market.

Along with the support of the brand-new MSI Pen 2. The award-winning MSI Pen 2 uses the latest MPP2.6 Technology, with 4096 pressure level and haptic feedback, making it feels like writing on actual paper. Furthermore, you can also use the MSI Pen 2 as a traditional pencil on paper without switching to actual pens.

The power of the Prestige series has come to a new level. The new Prestige 14 Evo and Prestige 16 Evo support up to the latest Intel® Core™ i7 H series processor, which provides a lightweight yet powerful experience for users. While Prestige 16 Studio also comes with GeForce RTX 40 Series Laptop GPUs, and is NVIDIA Studio validated, promising even better productivity and peak reliability.

The brand new 13-inch Prestige 13 Evo is the lightest laptop in the whole MSI series, built of magnesium aluminum alloy, it weighs only 990g. The Prestige 13 Evo is also equipped with a 75Whrs large-capacity battery, which could last long for 15 hrs.

* Product specification, functions and appearance may vary by models and differ from country to country. All specifications are subject to change without notice.