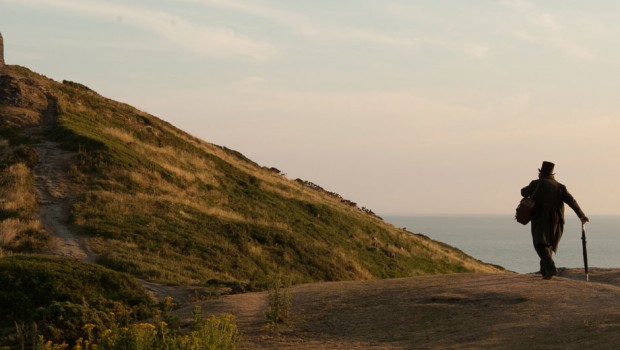 Mike Leigh’s biopic of J.M.W. Turner, one of history’s most celebrated landscape painters and revolutionists with light, defies the rigidness of conventional biopic structures. Starring Timothy Spall in the lead role, Mr. Turner is shaped like a collage of the man’s life. Not for a moment does the film pretend to fully grasp Turner’s psychological thoughts. Its episodic structure doesn’t chronologically lay down life events either but deliberately contradicts them. In the film, Turner is talented, romantic and generous but also ugly, inarticulate and cruel. The structure’s achievement is unifying each chapter, humanising and dehumanising the artist. In effect, the film dissolves preconceptions of the beauty of art being inseparable from the artist’s hand.

Set in the 19th century, between the late Georgian period and early Victorian age, the film is compromised of images reflecting the contrasting sides of Turner. The film opens with the image of the windmill in the sunlight and as the camera retracts Turner himself is cast in a deep shadow. Some have said the light and the breadth of the landscapes are true to Turner’s work but the darkness segregates the beauty of the work from the bleak humanity of the artist. An early scene of juxtaposition has a similar effect. To prepare for a meal Turner’s father buys a pig’s head. As the fur is scrapped off its face Leigh cuts to Turner himself being shaved by his father with a razor. To Mike Leigh Turner is a brilliant artist but also an animal whose primal instincts take the form of the conflict and darkness hidden from the public eye. 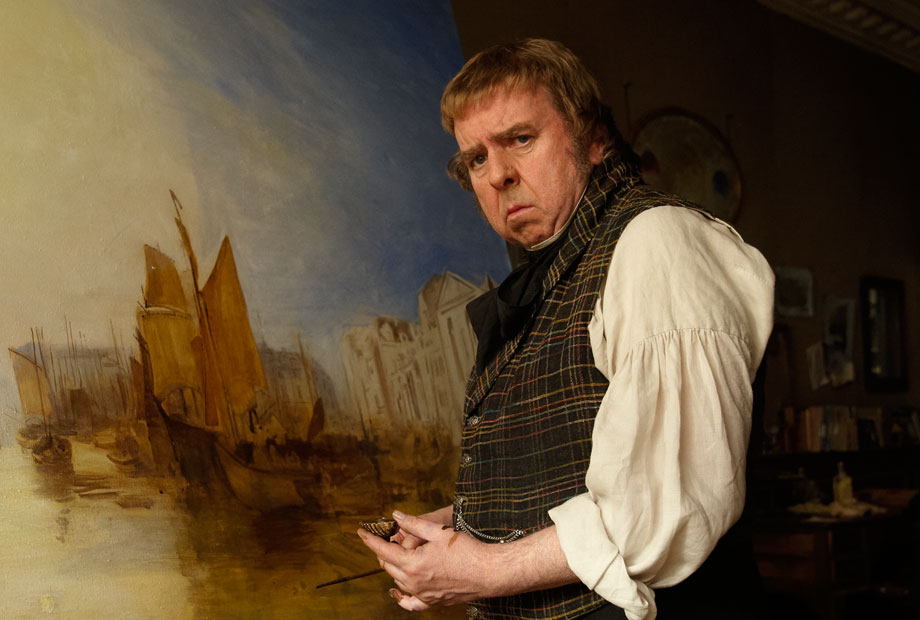 In his best performance, where he learned to paint for two years, Timothy Spall supplies the film’s dramatic character structure, creating variations of Turner’s personality. One major character trait he utilises throughout the film is grunting. The comic technique underscores Turner’s mystery as someone with a powerful eye for the beauty of landscapes but also inarticulate and animal-like. Turner’s relationships share similar obtrusiveness. Turner shares a loving, affectionate relationship with his father William (Paul Jesson), who lives under his roof, until the old man is unwell and dies. Contrastingly, Turner’s relationship with women is terribly brittle. He refers to his mother as a madwoman and his sister has died at a young age. Other women are sexually disposable to him. Turner takes little notice of his ageing servant (played with astonishing frailty by Dorothy Atkins), who in her forty years of service to him developed a skin disease. But in one confronting scene he sexually abuses her against a bookcase. 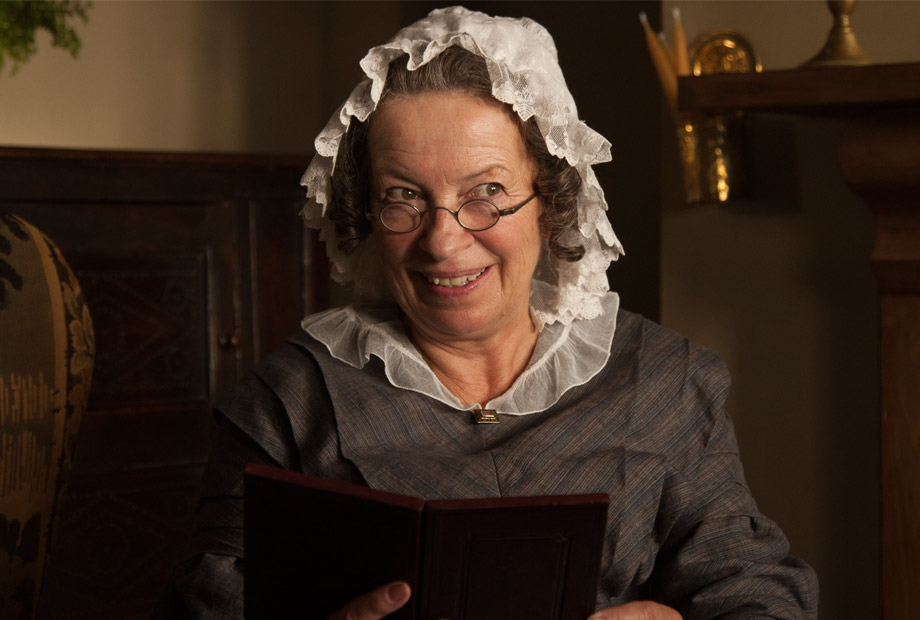 Turner also has a sharp-tongued former mistress, Sarah (Ruth Sheen), to whom he has several daughters. They present his grandchild to him but he shows little interest in any of the women. Death and grief are two experiences to which Turner empathises with both men and women. He shows more love for Sophia Booth (Marion Bailey) because he feels for her, having grieved twice for two dead husbands. Turner travels to stay in her home under a false name and after her husband death he tells her she’s beautiful and starts a relationship with her. In another act of mercy, Turner opts to cancel the entire debt of a man who owes him money after he admits he’s buried several of his children. 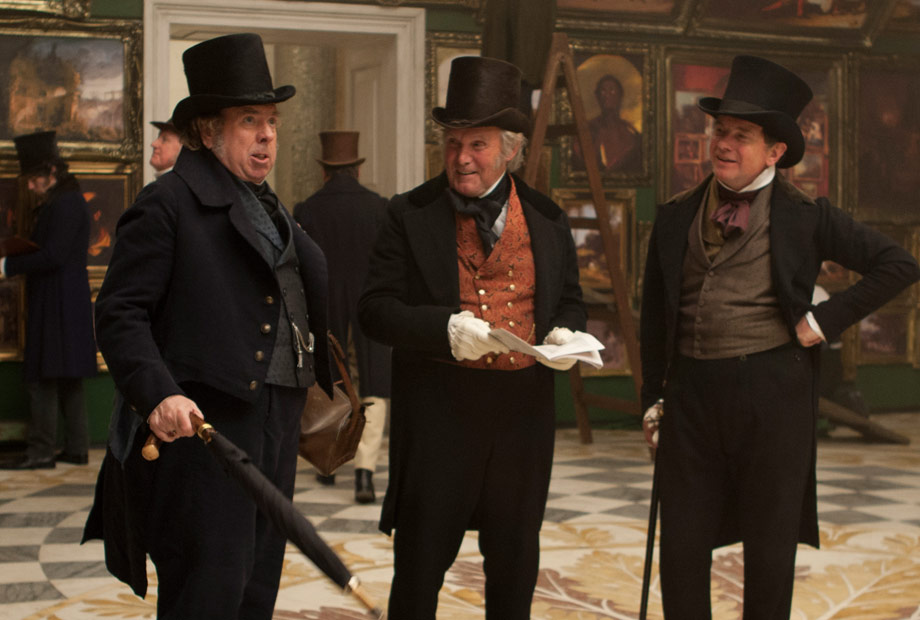 In other episodes Turner is characterised as a fleeting passage of time, drifting away from his talents and cultural relevancy. He is humiliated at one point by a stage show parodying him and as he battles his health issues some look at his work and believe he is losing his eyesight. One of the film’s best episodes is when Mr. Turner is introduced to the camera for the first time and he and Sophia have their photograph taken in hilarious fashion. Believing painting is facing irrelevancy is a major outcome of the technology coming to the fore. Mr. Turner also combats John Ruskin (Joshua McGuire), a young British art critic taking aim at a classical painter. Leigh admits this is a comic character but he amplifies generational change as Turner grows older and mortality seems inevitable. 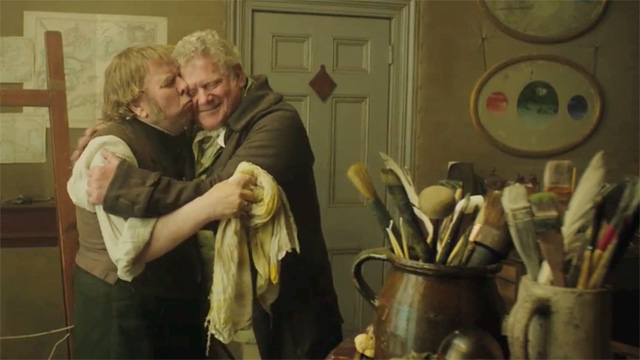 Mr. Turner’s emphasis on period details and authenticity is admirable and challenging. The painful lengths Mike Leigh has taken to write the dialogue in 19th century English is extraordinary. Yet early in the film the characters are often inaudible because of their thick accents. Problems like these ensure it takes time to warm to the film and its organic structure. But the authenticity, including Jacqueline Durran’s costumes and the subdued watercolours of the sets, is impeccable throughout the episodes, each of which builds towards an interpretation of Turner’s soul. These are not separate stories but unified pieces of a life. “Everything is connected. Nothing is in isolation”, says scientist Mary Somerville (Lesley Manville). At the film glides over its two and a half hour running time, which doesn’t feel long at all, Somerville’s words are exceedingly true as we lay witness to various contradictions of Turner. Timothy Spall mesmerises, proving the artist is beautiful and monstrous.