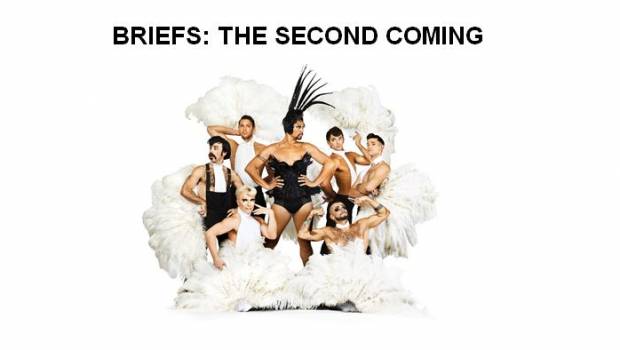 Briefs established themselves as a leader on the cabaret and circus world stage at the Edinburgh Fringe in 2013, going on to win Best Circus at Perth Fringe in 2014, selling out consecutive London, Perth, Adelaide and Edinburgh Festival runs, and winning two Green Room Awards in 2015.

Briefs: The Second Coming is making its Melbourne International Comedy Festival debut in the glorious Famous Speigeltent. The six Aussies and one New Yorker are a heart-stopping blend of cabaret burlesque, Australian machismo and punkish swagger and are powered by a fierce energy as they mix up a potent blend of drag, glamour and athleticism, infused with dancing, tumbling, juggling, acro- balancing, trapeze, hula hooping, lip syncing, sequins, feathers and frocks.

Audience favourite Shivannah (Fez Fa’anana) has several new and surprising tricks up her sequined sleeves and leads the troop through the show with brazen beauty. The Las Vegas King of Burlesque Mark ‘Captain Kidd’ Winmill takes a turn as the fabulous bird in his own golden bird bath with an act that won him the title King of Burlesque in Las Vegas 2011.

The Briefs line-up features legendary drag performer Dallas Dellaforce who not only designs all the show costumes, she strikes together high fashion with avant-garde performance; one of Australia’s leading aerialists, contortionists and circus trainers, Thomas Worrell, who ties himself in knots in the air; Evil Hate Monkey, escaped from a New York Zoo and is Briefs second Las Vegas King of Burlesque recipient and fresh-faced circus brats Lachy Shelley – from Circa Zoo and Flipside – and rubik’s cube pro Louis Biggs who both melts hearts and leaves the audience gasping for more.

“Like a blazing disco ball of energy exploding in a nightclub that’s inside a theatre, inside a circus tent.” — ★★★★★ Time Out

“A glorious celebration of flamboyant fun.” — ★★★★ The Guardian

Club Briefs was where it all began for Briefs Factory, as a speakeasy in the bowels of Brisbane’s alternative variety scene, with the goal to create an informal space where professional performers could test drive innovative, late-night cabaret acts. It continues with this ethos in mind, an incubator of exciting talent and the best place to see the freshest cabaret smashing it up in 2018.

Cult cabaret hooligans and mischief-makers Briefs present a wild romp of disco dancing, circus, variety and burlesque featuring a hand-picked selection of guests mixing it up alongside the Briefs cast. Club Briefs have shared the stage with Lisa Fa’alafi (Hot Brown Honey), Courtney Act, Le Gateau Chocolat, Betty Grumble, Karen from Finance and many more artists from across the world of cabaret.