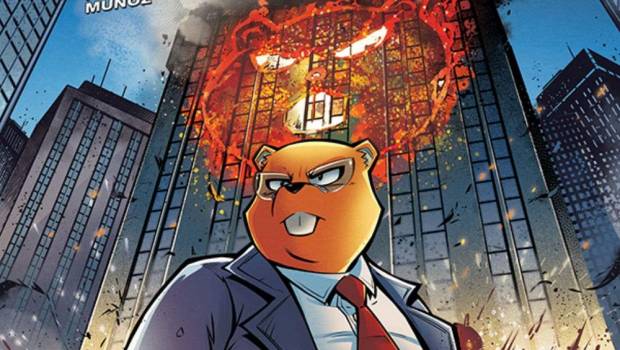 Summary: Special agent Mr Beaver is hot on the trail of criminal syndicate “The Twelve” and arrives in town to take on the case.

Special agent Mr Beaver is hot on the trail of criminal syndicate “The Twelve” and arrives in town to take on the case. He is offered a young rookie as a partner but refuses to accept his help, but when he finds someone from his past involved he has no choice.

This is the first five issues of the Mr Beaver comic collected into one volume and it does help with getting to know the story and there is more than enough action involved for even a full run of a series in just these episodes.

The writer says as the end of issue 1 that he has wanted to do the story since he was 10 and has since worked on a lot of other comics as an artists, but this is first publication as the writer.

I thought the story comes up well even if it is a bit simplistic at times. Mr Beaver seems to be the only animal wearing pants in this universe which seems strange if one could talk and do martial arts, other animals should be able to also.

The character designs and artwork look great and having a martial arts beaver seems to work well within the context of the story.

I did like the quirks of the main character such as his love for empanadas and his partner not even knowing what those where. There is some backstory explained with the trials at the mysterious academy that Mr Beaver was a student of that also has the main villain’s reasoning shown too. Having the fear of lobsters for the main baddie is an interesting point.

I would recommend this story if you like crime stories with lots of action but would like something a bit different from the normal superhero stories with humans.